Fortnite developer Epic Games is suing a 14-year-old accused of cheating, and has come under fire from the defendant's mother.
Chris Kerr
News Editor
November 27, 2017

Fortnite developer Epic Games is suing a 14-year-old accused of cheating, and has come under fire from the defendant's mother.

As reported by Kotaku, the bizarre situation arose after Epic decided to take some players to court after banning them for using cheat services such as aim bots to gain an advantage.

At the time, not much was known about the defendants, but it's since come to light that one is a actually a teenager.

Angry at the decision to sue her son, the defendant's mother has written a letter to the court lambasting the studio for using a minor as a "scapegoat."

In the letter (shown below) she claims that Fortnite's terms require parental consent for minors, but explains that she never gave her consent.

She adds that Epic is suing her son based on a perceived financials loss, but that such a claim is at odds with the game's free-to-play nature and is "feasibly impossible" to prove.

Notably, she also points out that Epic has broken the law by releasing making her son's information public, which is illegal when dealing with minors.

"It is my belief that due to their lack of ability to curve cheat code and others from modifying their game, they are using a 14-year-old child as a scapegoat to make an example of him," reads the letter.

"The company is in the process of suing a multitude of players for this game Fortnite. Instead of Epic Games suing the websites providing the chat codes, they are going after the individuals using these codes."

Epic responded by saying it had no choice but to file a lawsuit, other than to drop the claim altogether, and explained it's "not okay with ongoing cheating or copyright infringement from anyone at any age."

"This particular lawsuit arose as a result of the defendant filing a DMCA counterclaim to a takedown notice on a YouTube video that exposed and promoted Fortnite Battle Royale cheats and exploits. Under these circumstances, the law requires that we file suit or drop the claim," said Epic in a statement handed to Kotaku

"As stated previously, we take cheating seriously, and we’ll pursue all available options to make sure our games are fun, fair, and competitive for players." 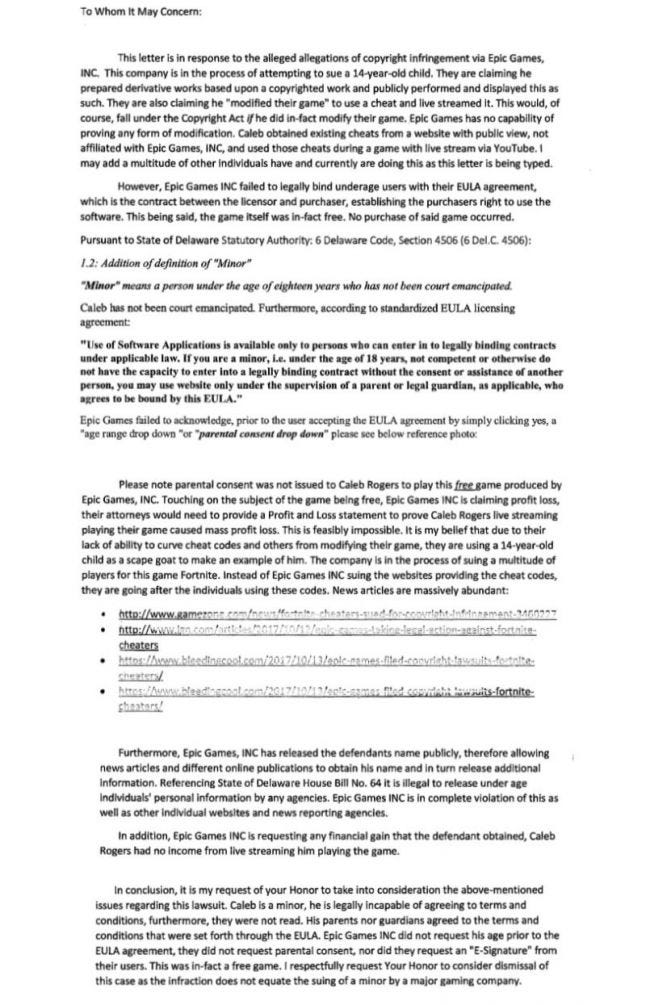