A lack of major new releases have attributed to a sales dip at Square Enix, which just released its financials for the full year ended March 31, 2020.
Chris Kerr
News Editor
May 14, 2020

A lack of major new HD game releases have attributed to a sales dip at Square Enix, which just released its financials for the full year ended March 31, 2020.

Breaking those numbers down, Square explained its HD Games sub-segment witnessed a sales decline and operating loss due to "weak additional sales" of catalog titles and a lack of "major" releases.

It was a similar story within the Smart Device and PC Browser sub-segment. Again, both net sales and operating income were up, with titles like Romancing Saga ReUniverse and Dragon Quest Walk providing a boost.

Although sales rose in the MMO and Smart Device sub-segments, overall software sales in the Digital Entertainment division were actually down. As the table below shows, sales of digital and retail software dropped to 18.09 million units in FY19 from 26.62 million units in FY18, with a substantial drop in physical sales offsetting a slight increase in digital downloads.

Looking ahead, Square explained the COVID-19 pandemic could have a "serious impact" on its earnings and financial conditions, and as such has refrained from setting out a consolidated forecast for the upcoming fiscal year.

Outlining how coronavirus might affect its business, the Japanese company suggested it may cause a "global economic slump" that weakens content demand and impacts manufacturing, while also impacting development timelines and amusement facility sales.

With that in mind, Square has established some short and mid-term targets of establishing a business structure capable of generating consolidated sales of 300 billion yen ($2.8 billion), and increasing sales of digital titles while also promoting game-as-a-service projects. 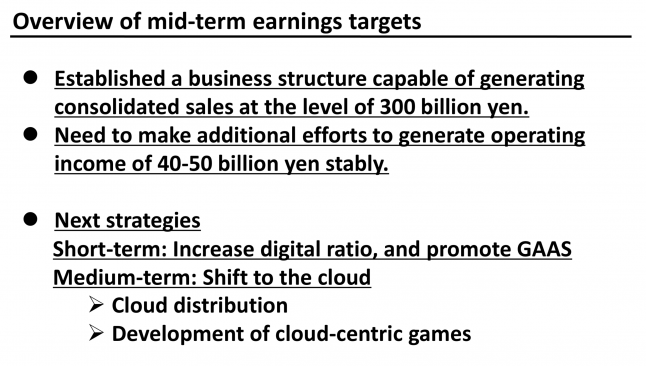