The company had previously earmarked $1 million to pay creators through a Creator Payouts Pilot Program that allowed users to earn cash based on an average of their daily active players across a single month.

Perks, however, is worlds apart from that system, and is being pitched as a 'creator-friendly' economy that will give Core developers full control over how they monetize their games, allowing them to implement premium in-game cosmetics and other in-app purchases, passes, memberships, subscriptions, or even a premium model.

Notably, the new system will also offer creators a 50 percent share of revenue -- which, according to Manticore, is more than double that of any other full-service UGC platforms, including Roblox.

"Core is an all-in-one, full-service platform that provides everything creators need, from game and world creation tools, to scalable multiplayer-ready servers, publishing, marketing, and more. Perks supports creators by giving them the flexibility to make all types of games and worlds, and be financially rewarded for their success," reads a press release.

For instance, creators can build anything from a deep traditional MMO with a monthly subscription to simulation games with in-game cosmetic purchases, a completely free-to-play shooter or even a series of pay-to-access arcade games." 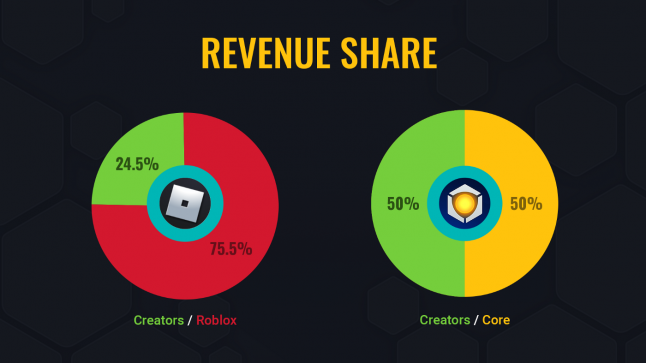 Commenting on the 50 percent revenue split at the heart of Perks, Manticore chief exec and co-founder Frederic Descamps said it's imperative that creators are paid fairly as UGC platforms become more widely-used.

He suggested that platforms like Core will only become sustainable in the long-term if users and creators feels valued, and said the 50-50 revenue split is Manticore's commitment to ensuring that happens.

"Manticore is a business and we’ve spent years building our platform, so of course we want to be commercially viable. But we understand that the more creators there are who make great games, the better off everyone on Core is. And we believe more creators will come to Core if they’re confident they can truly earn," they commented on Medium.

"Our 50–50 revenue split demonstrates our commitment to helping top creators and newcomers alike make a living. We wouldn’t offer such an equitable split if we didn’t believe it was viable and sustainable."

You can find out more about Core and Perks by reading Descamps' full blog post.