The game industry is notoriously male-centric, and Setian's in-depth talk offered practical ways organizations can counter many of the biases and obstacles leveled against women who are trying to climb the ranks within a company.

In order to get to better representation within a company, Setian said, "It's easier to de-bias organization's practices and procedures than to de-bias its mindsets."

"Change is a process," she said. Using her company as an example, across Avalanche's global studios, the company is working toward a more even split, but men still dominate: 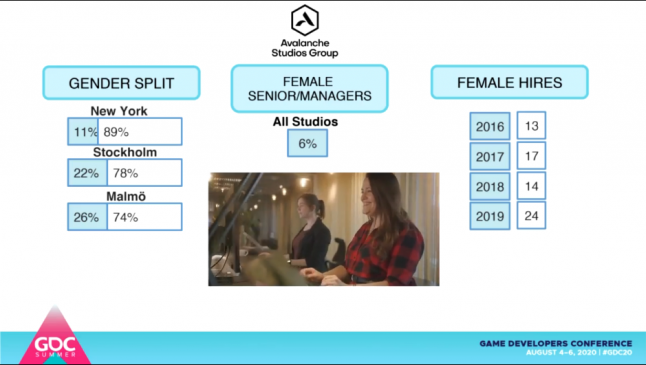 Setian explained the steps in getting to a more woman-friendly studio:

Reach out to younger female audiences. "The end goal is increasing our female talent pool." She said outreach should start at middle schools, as girls begin to lose interest in STEM around this time. She also said to educate girls on the various roles in the game industry. "Girls don't think of games as a viable career path, because they don't know what it means to work in games, and the sort of positions that are available to them."

Female representation in games. "Let's show them that they have a voice in the medium and they exist in the games themselves," Setian said.

Combat unconscious bias. Setian said there are many ways that unconscious bias manifests around games and the game industry. This can happen often in a job ad. She cited a study that said, "Women were less likely to believe they belonged in a particular job when the advertisement used masculine wording, and they rated masculine jobs as less appealing."

She said Avalanche addresses this by training staff on best practices on biases and reviewing job postings for masculine wording.

Visible presence of female developers. Setian said to include women in school visits, marketing initiatives, conventions, offsite recruitment, on your studio website, and other highly visible places to show girls and women that they can be in the game industry and can make it to the top.

Mentorship. Setian said for 48 percent of women in the tech, "the top barrier…is lack of workplace mentorship. And that's sad." Education, identifying skills, career planning, and offering guidance can be ways to mentor women. "Mentor or recommend mentorships," she said.

Master suppression techniques and strategies. Setian said this doesn't sound so pleasant--these are strategies people or groups can use to "dominate or humiliate others in a subtle, indirect way," citing psychologist Injiald Nissen. But if you learn these strategies, one can learn to counter them. 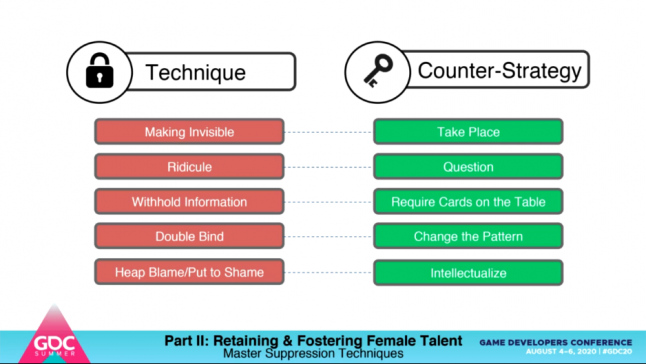 "Making invisible" may be someone using their phone while you speak. You may counter that by asking for them to put their phone away. When someone ridicules you in a supposedly subtle way, ask them calmly what they meant by what they said or did. "Withhold information" is not being included in relevant meetings, documents, news, and the like. The counter to this would be to point out the pattern and why you need this information.

"Double bind" is when whatever a woman does, she is wrong. "If you're direct, you're a bitch. If you're a good listener, you're too passive," Setian explained. To counter this, she said to "change the pattern," and make your restraints clear. For example, if you have an errand to run, clarify the rules. "Say, 'hey, I need to pick up my kids and I know that you want this tomorrow at 2 o' clock and you will have it by the time you've asked for it.'"

"Heaping blame" and "putting to shame" is when you're blamed for something out of your control, such as blaming oneself for not meeting a goal that had an impossible timeline. Setian said the counter to this is to intellectualize. She admitted it is difficult, but recommended you objectively look at the situation and ask yourself "why do I feel guilty?" Try to put yourself in other peoples' shoes as well and try to think about why you feel the way you do.

Be a champion. Setian described ways to elevate women in the workplace, giving them a platform to speak, speaking up for women who are being talked over, mentor women, and just encourage the women you work with in general.

Sponsorship. Senior members of an organization need to take the necessary steps to identify and develop talent in women, Setian said. This involves identifying women who have a high potential for leadership roles, seeking out opportunities for them, then advocating for them. "Help them climb the ladder," Setian said. She called sponsorship programs dedicated work that needs to be tracked. "Start a sponsorship program," Setian stressed.

Shift leadership framework. Setian said often when women do make it into a leadership role, they enter a framework that is more conducive to male success.

Citing the Harvard Business Journal paper, "Women Rising: The Unseen Barriers," she quoted that "Organizations inadvertently undermine this process [of getting women into leadership positions] when they advise women to proactively seek leadership roles without also addressing policies and practices that communicate a mismatch between how women are seen and the qualities and experiences people tend to associate with leaders."

She said in addition to mentorship and leadership programs, organizations need to educate men and women of gender biases, create safe spaces for leadership identity and development, and to anchor development of women leadership with a sense of purpose.

Family leave and parenthood. Setian said girls as young as nine are thinking about how raising kids might affect their careers. "Women are still doing the heavy-lifting when it comes to childcare," Setian said, and it's affecting women's careers--particularly in the U.S. which doesn't have government-mandated paid parental leave.

In countries without as much government-mandated support for parents, Setian encourages companies to be flexible with every parent so there's no guilt in having to leave work to take care of a child. She also says to pay both men and women for parental leave and "create a culture that normalizes childcare."

In all, she encouraged people to advocate for positive change within company, and to lift the standards for inclusion and diversity. "Just because things are the status quo doesn't mean they're ok," Setian said. 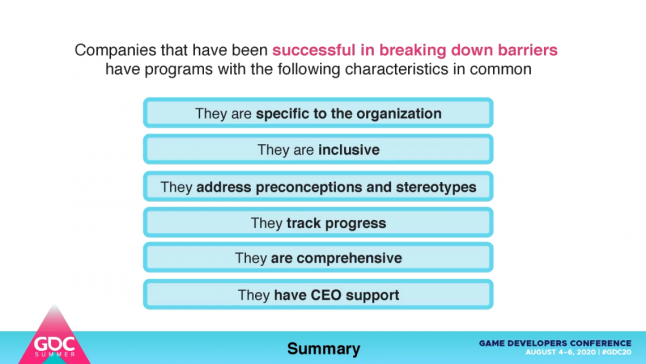 Characteristics of an organization that successfully breaks down barriers. 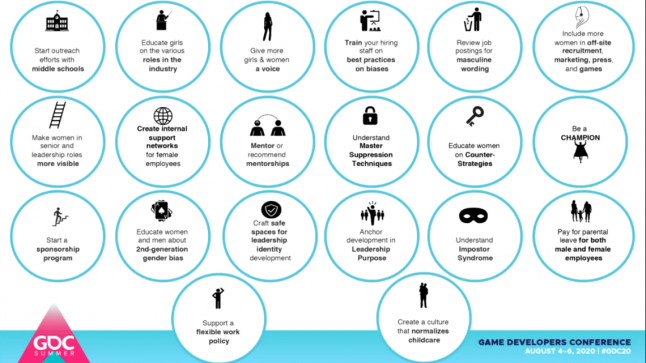