Team Chaos and Brian Greenstone worked closely together to build a game that would serve as a proper reboot of the original Enigmo. What resulted is a came that stays true to its heritage while also paying homage to games like The Incredible Machine.
Trent Polack
Blogger
February 25, 2014

When given the opportunity to work on the Enigmo franchise, we all had a small moment of personal joy, as the game has always been special to us. I recall Enigmo being my very first phone game purchase, and how much it reminded me of an extremely important game from my childhood - The Incredible Machine. With simple controls and goals, both puzzle and dexterity elements to each level, I loved everything about this game.

There's something magical about those "old-school" puzzle games; The Incredible Machine empowered its players with something that's been lost over time: the play-in-the-sandbox feeling. It would provide you with a puzzle, a variety of tools, and then you, are the player, were on your own to figure out how on earth you were supposed to solve the puzzle at hand given a seemingly impossible set of items with which to solve it. Enigmo was the same way; you had a puzzle in front of your face, you had your toolset, and beyond that… You have your brain.

And, as it turns out, your brain isn't quite as trustworthy a puzzle-solving tool as you'd like to think it is. Games like The Incredible Machine and Enigmo had this way of intensely focusing your puzzle-solving efforts in one direction — thinking that's the direction that you had to go in order to solve the puzzle at hand. When, really, one small course correction along the way would have solved the puzzle in half the time, with half the brainpower, and reassured you, as the player, that your spot in MENSA was still there waiting for you. It's a magical quality of these types of puzzle games; no guiding hands, just the reassurance that the puzzle in front of your eyeballs can be solved. Even if you weren't sure how.

We assembled a small team of 4, working on this as more of a passion project, mostly after hours and in our spare time. Dedicated to making a game that kept the spirit of the original game - a physics based puzzler with an element of time, we chose to keep much of the game the same, but bring it up to today’s visual standards. I handled all of the development and product direction, Jonathan Price did all of the environment art and vfx, Andy Seymour handled all of the level and puzzle design, and Matt McDaniel did the UI Art.

We built the new game in Unity, shedding the antiquated OpenGL 1.0 engine in favor of something more flexible and powerful. And, more importantly, something that provided us with a more intuitive workflow for everyone on the team. Unity is also something that everyone on the team was comfortable and familiar with, so the development process went about as smoothly as it could. It afforded us the ability to all work efficiently without blocking each other too much.

Porting the game meant that we would have to wait for the base engine to be put together before hitting the ground running with level design and art production. We made the decision to base all of our level geometry off of the same sizes and constraints as the original game, because Enigmo had a level editor, and we could start making levels there, then rebuild them in Unity once the new engine was created. This allowed Andy to start designing levels the second I hit the code in the new engine. Also, Jonathan had context for exactly how big each piece needed to be for the game, and he could begin his work on day one as well.

And, of course, the game wouldn't be what it is without a lot of help from local audio design studio gl33k. They took a very hands-on approach to the game's sound design, and it resulted in a very dynamic, very relaxing audio soundscape unique to each environment of the game. And every game piece contributed to the rhythmic quality of Enigmo: Explore's dynamic soundtrack. 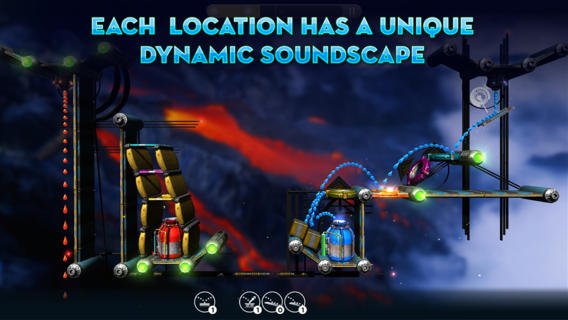 As we were approaching submission, we had to decide on a pricing model for the game, which was a surprisingly difficult thing to reach a decision on.

Most of our games with Team Chaos thus far have all been released as free-to-play with in-app purchases (or, recently, ad-supported), but we felt that Enigmo: Explore would be best-served with the kind of price model that its old-school, experiment-driven gameplay merited: a set price for the entire game. No in-app purchases, no ads, no cross-promotion, no nonsense. The obvious price, if you were to take a look at the App Store right now, would be that $0.99 price.

But, why? Why that price? We put a lot of time, effort, and polish into Enigmo: Explore and while we were thinking about the potential of DLC down the line, we had absolutely no intention of having any in-app purchases or boosters in the core game, or anything else, so we made the decision to price the game at $1.99. Which, really, is still pretty absurdly cheap when you consider the amount of content the game has to offer, but on the App Store, that's a borderline "premium" price.

So, that kind of became the unofficial marketing position we took when showing the game to the press: "$1.99 and you get the game. Period. End of sentence. No bullshit." We liked that line, anyway.

On a tight schedule with a small crew, we had a number of great new puzzle features that we wanted to implement, though we ran out of time to implement them. We are already planning out what could be the next iteration of the game either as an add-on or a sequel, using mechanics and puzzle elements dreamed up during the development of Enigmo: Explore that completely change the way that we've seen and played Enigmo so far.

We really wish we had the time to really explore all of the additional ideas that came to mind over the course of development and, hopefully, if Enigmo: Explore performs as well as we hope it will, that we'll still have the opportunity to expand on the solid foundation that we built.

We are very proud of the project we created, and thankful to work on a series that we all really enjoy. And we are super, super psyched to have Enigmo: Explore featured on the front page of the App Store. But, for now, it's on to one of the many other projects we've got brewing, and hopefully we can revisit Enigmo: Explore real shortly to add some additional content, some new puzzles, some new mechanics, and anything else we can dream up.