Digging deep and learning to make your marketing failures matter

Failure is a natural part of any creative process, but what truly matters is your ability to look at your failures and, in the words of Innersloth community director Victoria Tran, turn all that trash into marketing compost and watch your game grow.

That's the key takeaway from Tran's wonderfully metaphor-filled GDC Showcase talk today. In that 30 minute chat, Tran outlines how developers and marketers can look to their failures to fuel their future success and shares some tried and true advice on how to do so.

She notes that, from the outside, both Among Us dev Innersloth and her previous haunt Kitfox Games appear to have come by their success very naturally and effortlessly, but in truth there's a fair about of unseen work and, importantly, failure that played a key part in that eventual success.

"Success is built on the ruins of failures that nobody else has seen."

Success can look like many different things for many different teams. For some, it's about winning awards or nabbing press coverage, while others hold themselves to the standards of a successful Kickstarter or high sales for their game.

"But here's the thing: this is what success may look like to you, but it's actually built on trash," says Tran. "So much trash."

Tran argues that, in her experience, both spectacular failures and mistakes that managed to slip by unnoticed can be turned around and used as learning experiences from which your future success can thrive. Turn all that trash, she suggests, into something useful.

"Failure's more than just an embarrassing moment in my life that I want to bury. I can learn from it! And it's not just that; I can make it make me smarter, invigorate me, and make me a better, more well-rounded person."

To bring this all into an analogy about changing your mindset and capitalizing on failure when it finds its way into your life, Tran offers the following: "Basically, failure becomes the compost and fertilizer for growth and success. I want my trash to become a resource that feeds into the roots of my success and have it grow into an entire garden...that attracts cows. And then I can literally milk failure for all it has."

However, she does point out that not everyone is lucky enough to be in a position where failure can be framed as a resource, but the advice she has to offer can still be useful to shifting your own perceptions or for fostering a workplace with a better culture surrounding failures. 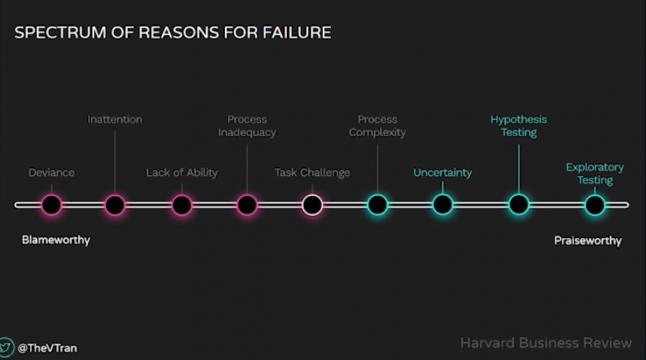 There are many reasons why failure creeps up, and while it's important to reframe how you understand failure, Tran notes that it's also important to realize that some types of failure are more desirable than others. Citing the Harvard Business Review, Tran ranks the reasons for failure on a spectrum from blameworthy to praiseworthy (above).

No matter the reason, accountability is important to reframe a mistake or failure into a productive mindset rather than a blame-laden one.

"Accountability means we're asking what and not who. Who means we're usually trying to blame someone, which is the wrong mindset," says Tran. "We need to ask the what in order to be able to learn better from our failures."

Messing up sucks! There's a natural fear response we feel when something goes awry, but Tran says is important to work through that emotion and realize that failing does not label you a failure. Instead, break the failure at hand down by asking these questions:

What is the problem? What am I doing/not doing to contribute? What will I do differently to help solve the problem? How will I be accountable for the result?

"The culture around failure is very important. It's not just on you. Hopefully your studio, manager, or boss has created an environment where you feel safe being accountable for owning up to your mistakes. Or, if you're in a powerful position, you have cultivated that environment with your own employees. Why would I ever want to be accountable for anything or tell you anything if the work environment makes it feel like a death sentence?"

Bouncing back requires reflection and insight into what went wrong. For this next phase, Tran stresses it's important to dig beyond the general reasons why something went wrong and find the second, or even third reason why something failed.

"The bigger the failure, the more likely there are intricate reasons why something failed. There are multiple events and different fields of expertise at varying levels of the studio. Understanding what happened and how to prevent it from happening again requires a really detailed discussion and analysis of the failure."

Tran says one of the best things about failure is the amount of information it gives you to take and move forward from. There's a handful of different types of failure explored in her full talk (technical, competence, moral, parameter, hierarchical, and subject) that all help to identify what those next steps can be. But in all cases, it's possible to grow and move forward with the right attitude. 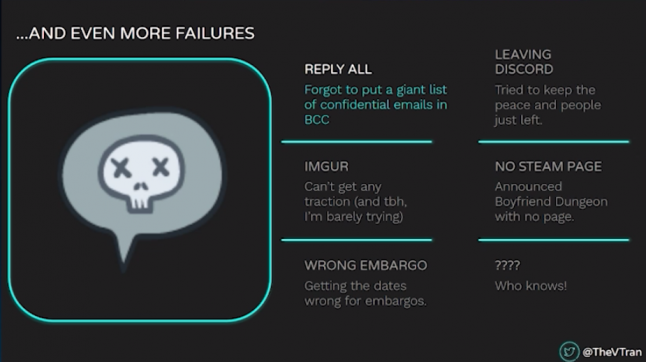 "First we need to dig into which skills you have, and which you don't! The insight you gain from the failure will be a really good sense of direction. Do you need to learn more about Marketing? PR? Time management? We're not born to do everything and I have my own weak spots when it comes to marketing. Being able to acknowledge and know where we are in our Skill Tree of Life is very important."

"We want to be specific and proactive about areas we need to develop on. If you don't nail it down, vagueness leads to inactivity. When something gets in the way, assess it, resolve it, and communicate it, and do that all proactively to make sure your studio or team are all on board with your plan."

This awareness and transparency has the added bonus of helping you reclaim some of the trust you might've lost when the mistake itself was first made. And at the same time, that awareness allows you to better understand expectations and your own limits.

"You need to set expectations not only for yourself, but for other people and what's expected of you. Being able to give proper attention and time to each task is important in making sure you minimize the catastrophic failure, but also that every project that lands on your lap is given the proper attention it needs to excel."