Sony has detailed its next-gen platform strategy, and it looks like backwards compatibility and cloud streaming tech will be integralÂ to the company's plans.
Chris Kerr
News Editor
May 21, 2019

Sony has detailed its next-gen platform strategy, and it looks like backwards compatibility and cloud streaming tech will be integral to the company's plans.

Outlining its approach to 'generational transformation' during a recent investor presentation, the company explained it intends to "harness the power of new technology" to offer "transformative and immersive" next-gen experiences.

Although Sony was keen to plug the capabilities of its next-gen console, which is capable of super-fast load times and rendering thanks to the inclusion of an SSD, it also explained it would leverage backwards compatibility to transition the PlayStation community to next-gen hardware "faster and more seamlessly than ever before."

The company hopes that transitional strategy will provide a stable environment for content creators, and envisions the PlayStation 4 will remain the "engine of engagement and profitability" for at least the next three years -- implying there'll be some crucial overlap with the (unofficially named) PlayStation 5. 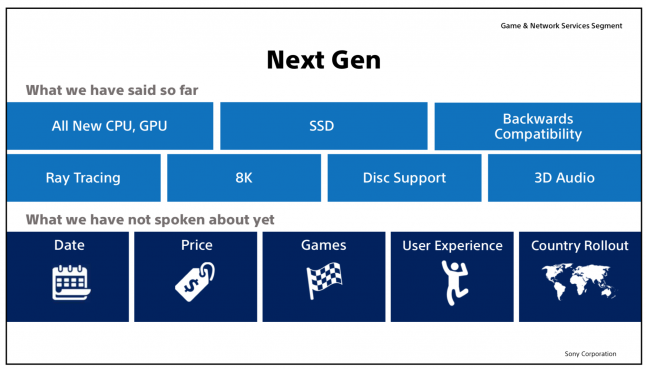 As the slide below shows, the console maker also considers game streaming a major part of its next-gen strategy, and intends to leverage streaming tech to create "a massively enhanced PlayStation community where experiences can be seamlessly enjoyed independent of time and place -- with or without a console."

It's a sentiment not too dissimilar to the one shared by Microsoft, which is rather appropriate given the two companies recently joined forced to develop cloud tech with the goal of supporting their individual game and content streaming platforms.

Speaking briefly bout that partnership, Sony said it hopes the two companies can work together to "achieve growth and scale faster than ever before." 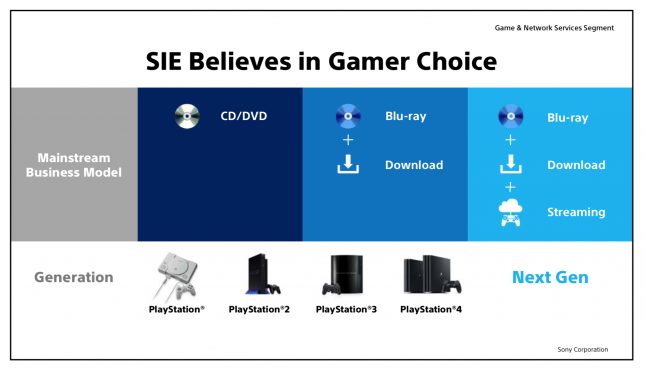