Analyst: Mobile to make up over half of worldwide game revenue in 2018

This isn’t the first time mobile has brought in more revenue than consoles or PC by a longshot, but this is the first time the platform makes up over half of game revenue on a worldwide scale.
Alissa McAloon
Editor-in-Chief
May 04, 2018

A report released by Newzoo breaks down where the firm believes the global game industry will fall revenue-wise by the end of 2018, noting that it expects mobile to account for 51 percent of the predicted $137.9 billion earned by games this year.

This isn’t the first time mobile has brought in more revenue than consoles or PC by a longshot, but this is the first time the platform makes up over half of game revenue on a worldwide scale.

And while Newzoo’s numbers are just projections based on the current state of the game industry, the information in the company’s report can offer developers a straightforward look at how the industry is changing through the years.

Looking at revenue generated by mobile, PC, and console games, Newzoo is predicting a year-over-year increase of 13.3 percent from 2017’s numbers, with digital game revenue accounting for 91 percent of that overall, or $125.3 billion.

Mobile games, meanwhile, are expected to see at least a 25.5 year-over-year increase, generating $70.3 billion and accounting for just over half of the global market for the first time. By 2021, Newzoo expects mobile games to be a $100 billion market on their own and generate 59 percent of the overall worldwide video game market. 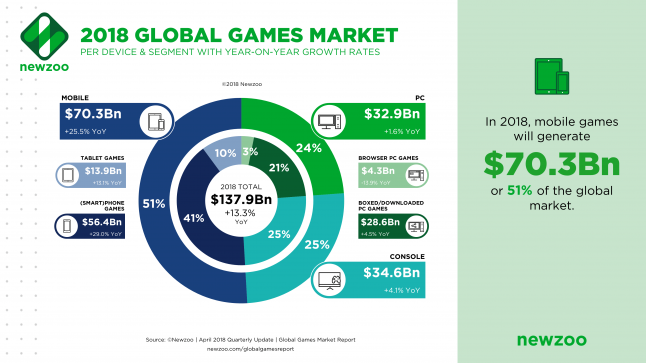 The full report on Newzoo has a fair amount of other predictions that game developers will likely find interesting. One particular section breaks down what game revenue looks like when broken down by region. Of that $137.9 billion expected to pour in this year, Newzoo believes $37.9 billion of it will come from China, while $30.4 billion is expected from the United States.

Even so, the Asia-Pacific region is expected to make up a whopping 52 percent (or $71.4 billion) of global game spending this year, a 16.8 percent increase from 2017’s numbers. A closer look at this data can be found on Newzoo.