In an infographic posted on the Mojang blog today, director of creative communications Owen Hill writes that Minecraft has sold over 100 million copies worldwide.

With a joking request that "maybe it's time to chill with the Minecrafts," the infographic showcases some interesting data about Minecraft players worldwide.

In the United States, only 19 percent of players have purchased the game on PC, with a near-even split between mobile and console players at 41 percent and 40 percent respectively.

In Europe, the playerbase ratio is far more even, with 29 percent of players playing Minecraft on PC, 35 percent on console, and 36 percent on mobile. The console version of Minecraft only dominates in Latin America, and the mobile version looms large in Asia/Asia-Pacific region.

Mojang also states that over 53,000 copies of Minecraft have been sold per day in 2016, and that there have been a total of 4 copies sold in Antarctica.

The strength of Minecraft's sales numbers doesn't come at a complete surprise, (though that number is staggeringly high), but the way the sales have broken down by region fascinatingly reflects the platform markets of the respective regions.

Not many games can claim to have sold so much and on so many platforms that they literally represent the global platform market as a whole.

We've posted the full infographic below for your perusal. 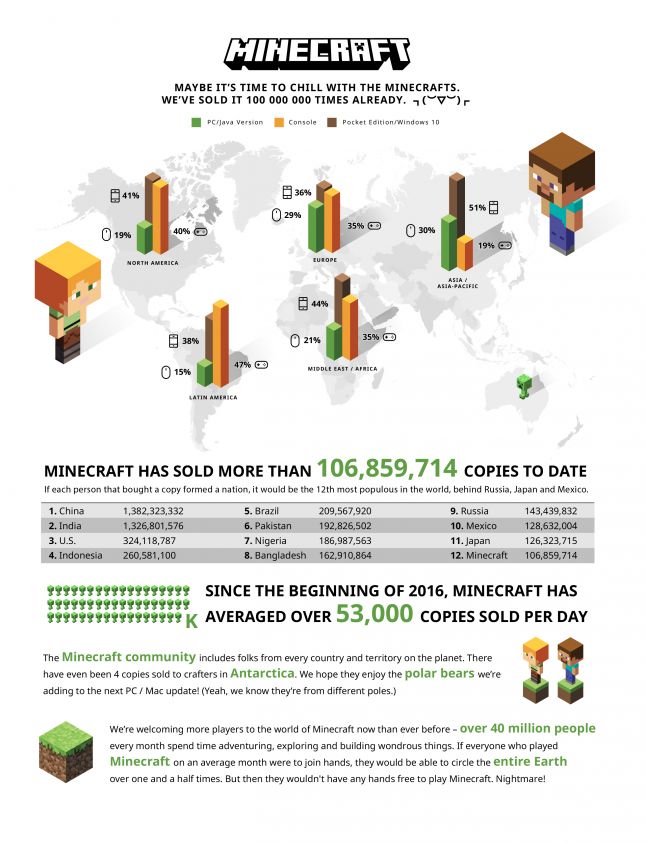