OSIRIS. Part 1. Preparing for an Early Access. Trip to the Heaven. Dark Dubstep.

This is the first article about OSIRIS game, which is producing by Azat Khafizov Design. Short description of the project and future plans are given.
Azat Khafizov
Blogger
March 07, 2019

Hi everyone! My name is Azat Khafizov. I am indie game developer and I am creating dark sci-fi horror/first person shooter OSIRIS.
This is the first article at Gamasutra dedicated to the development of OSIRIS game.

Game tells an evil story about OSIRIS corporation, which performs experiments in the field of cryogenics, teleportation and transition of human souls to another universes.


Scientists discovered technologies how to translate souls to the Heaven, this process was commercialized by OSIRIS corporation and gradually almost all humanity sold their properties to this company for the exciting opportunity "to proceed to the better world ahead of time"... 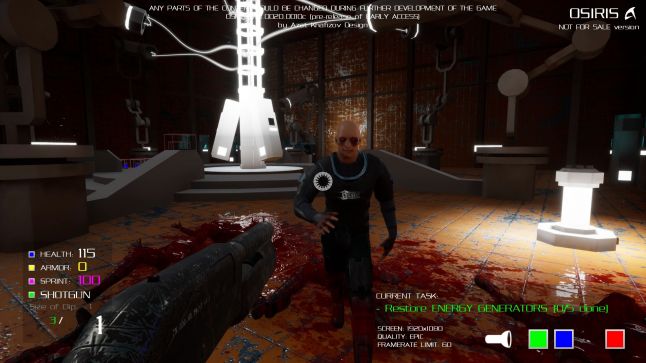 Game will be available soon on Steam via Early Access mode. There will be 10-15 minutes of gameplay available. This first version of the game will show the player Exploration and Action parts of "Complex E" research lab. Player will play the role of Mr.Switch, who is responsible for transition of clients of corporation to the Heaven.
In the first version of the game only 4 weapons (axe, SMG, shotgun, minigun) and 1 enemy are available.
All the project is inspired by Dark Dubstep music, so the original soundtrack mostly consists of such tunes. Music for the current version of the game is produced by Kwizma (https://soundcloud.com/kwizma)

You can watch 4-minutes duration gameplay video, which clearly describes current status of the game:

Right now I am upgrading elements of the interior, then I plan to test the build of the game on various configurations of PC. And then I will publish it on Steam via Early Access mode. System requirements will be published soon.

When game will be released via Early Access mode, there are planned next work to do:

Approximate duration of planned work is 18-24 months. I emphasize that this is only planned duration of the development and it can be changed later.

OSIRIS is powered by Unreal Engine.

Like I mentioned above project is inspired by Dark Dubstep. Here is short list of the most inspirational music:

Yoo can follow the news about OSIRIS or give me a constructive feedback via next channels:

Respect Your Dark Side!
I will share new info about the game in the next article.