This article describes a method for creating a realistic first person camera attached to a body to simulate realistic movements and animations in Unreal Engine 4
Fabrice Piquet
Blogger
June 21, 2018

I decided to share the method I use in my current project to handle my true first person camera. There is little to no documentation on this specific type of first person view, so after looking into the subject for a while I wanted to write about it. Especially since I had a few issues which took me a bit of time to resolve. The end result looks something like that :

What do we call "True First Person" (or TFP) ? It can also be called "Body Awareness" in some occasions. It's basically a camera that when used in a First Person point of view is attached to a an animated body to simulate realistic body movements of the played character, contrary to a simple floating camera. Here are a few examples of games having this kind of camera :

(The Chronicles of Riddick: Assault on Dark Athena)

What I'm not doing : separate body and arms

In a separate system, the two arms of the character are independent and attached directly to the camera. This allows to directly animate the arms in any situations while being sure it follows the camera rotation and position at all time. The rest of the body is usually an independent mesh that has its own set of animations. One of the problem of this setup is performing full body animations (like a fall reception) as it requires to synchronize properly the two separate animations (both when authoring the animation and playing them in-engine). Sometimes games use a body mesh that is only visible to the player, while a full body version is used for drawing the shadows on the ground (and visible to other players in multiplayer, this is the cas in recent Call of Duty games). This can be appropriate in order to optimize further, however if fidelity is the goal I wouldn't recommend it. I won't go in details about this method as it wasn't what I was looking for. Also there is already tons of tutorials on this kind of setup out there. 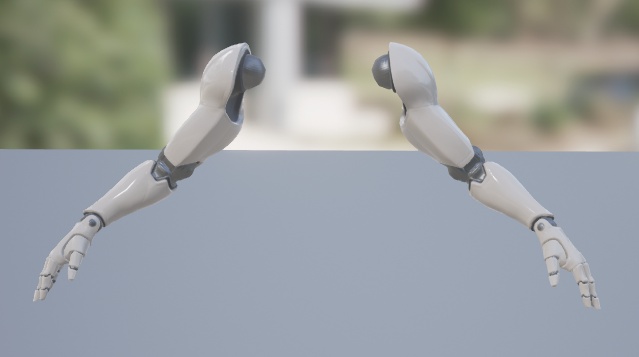 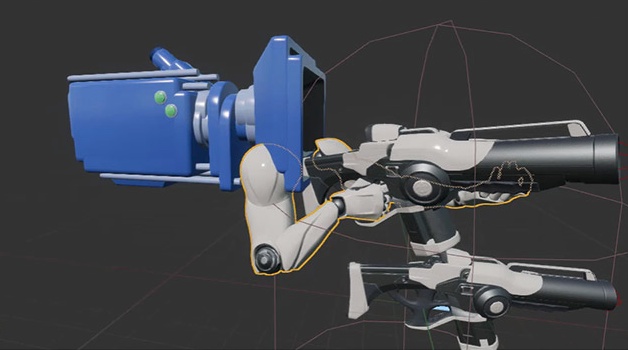 As a full-body mesh suggests we use only one mesh to represent the character. The camera is attached to the head, which means the body animation drives it. We never modify the camera position or rotation directly. The class hierarchy can be seen as this :

The PlayerController can always be seen on top of the Character (or Pawn) in Unreal, so this is nothing new here. The Character has a mesh, here a skeletal mesh of the body, which has an AnimBlueprint to manage the various animations and blending. Finally we have the camera, which is attached to the mesh in the constructor. So the Camera is attached to the mesh, are we done ? Of course not. Since the camera is driven by the mesh, we have to modify/animate the mesh to simulate the usual camera movements : looking up/down and left/right. This is done by creating additive animation (1 frame animation) that will be used as offsets from a base animation (1 frame as well). In total I use 10 animations. You can add more poses if you want the character to look behind itself but I found it wasn't necessary in the end. In my case I rotate the body when the player camera look at his left or right (like in the Mirror's Edge gif above). There is an additional animation for the idle as well, which is applied on top of all these poses. For me it looks like this : 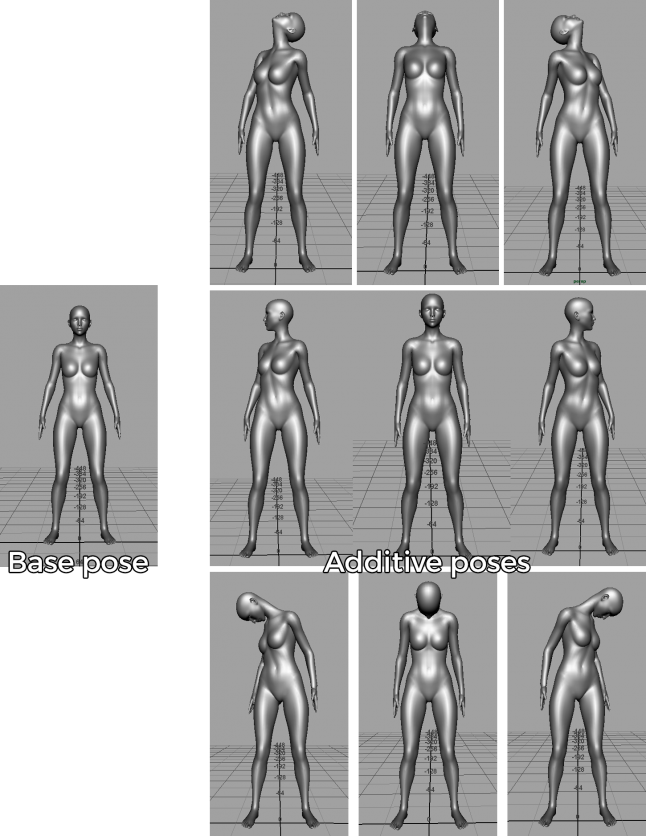 Once those animations are imported into Unreal we have to setup a few things. Be sure sure to name the base pose animation properly to find it back easily later. In my case I named it "anim_idle_additive_base". Then for the other poses I opened the animation and changed a few properties under the "Additive Settings" section. I set the parameter "Additive Anim Type" to "Mesh space" and the parameter "Base Pose Type" to "Selected Animation". Finally in the asset slot underneath I loaded my base pose animation. Repeat this process for every pose. 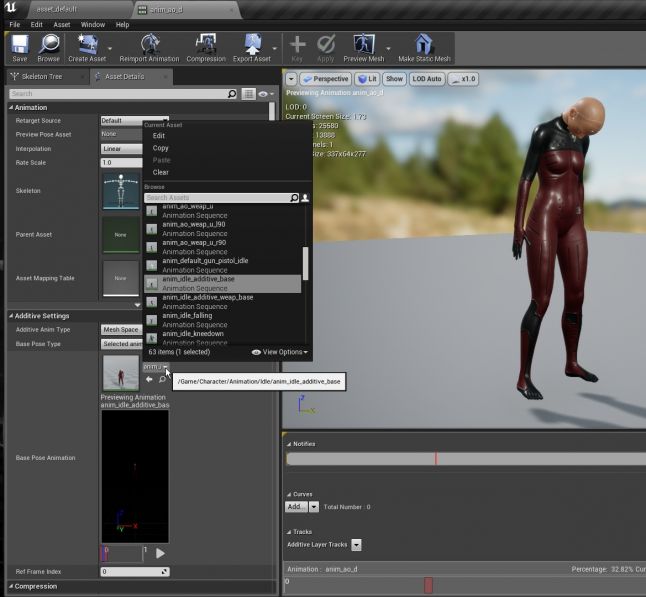 Now that the animations are ready, it is time to create an "Aim Offset". An Aim Offset is an asset that store references to multiple animations and allow to easily blend between them based on input parameters. The resulting animation is then added on top of existing animation in the Animation graph (such as running, walking, etc). For more more details take a look at the documentation : Aim Offset. Once combined, here is what the animation blending looks like :

My Aim Offset takes two parameters as input : the Pitch and the Yaw. These values are driven by variables updated in the game code. See below for the details 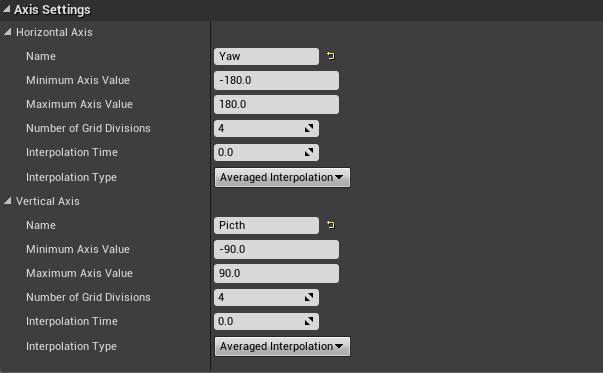 To update the animation, you have to convert the inputs made the player into a value that is understandable by the Aim Offset. I do it in three specific steps :

When the player move its mouse or gamepad control I take the input into account in the PlayerController class and update the Controller rotation (by overriding the UpdateRotation() function :

Notes : UpdateRotation() is called every Tick by the PlayerController class. I take into account the GetActorTimeDilation() so that the camera rotation is not slowed down when using the "slomo" console command.

My Character class has a function named "PreUpdateCamera()" which mostly do the following :

The last step is the easiest. I retrieve the local rotation variable (with the "Event Blueprint Update Animation" node) and feed it to the AnimBlueprint which has the Aim Offset :

I didn't mention it yet but an issue may appear. If you follow my guidelines and are not familiar with how Tick() functions operate in Unreal Engine, you will encounter a specific problem : a 1 frame delay. It is quite ugly and very annoying to play with, potentially creating strong discomfort. Basically the camera update will always be done with data from the previous frame (so late from the player point of view). It means that if you move your point of view quickly and then suddenly stop, you will stop only during the next frame. It will create discontinuities, no matter the framerate in your game, and will always be visible (more or less consciously). It took me a while to figure out but there is a solution. To solve the issue you have to understand the order in which the Tick() function or each class is called. By default it is in the following order :

So what happens here ? As you can see the Character class updates after the AnimInstance (which is basically the AnimBlueprint). This means the local camera rotation will only be taken into account at the next global Tick, so the AnimBlueprint use old values. To solve that I don't call my function "PreUpdateCamera()" mentioned before into the Character Tick() but instead at the end of the PlayerController Tick(). This way I ensure that my rotation is up to date before the Mesh and its Animation are updated.

The base of the system should work now. The next step is to be able to play specific animations that can be applied over the whole body. AnimMontages are great for that. The idea is to play an animation that override the current AnimBlueprint. So in my case I wanted to play a fall reception animation when hitting the ground after falling a certain amount of time. Here is the animation I want to play :

The code is relatively simple (and probably even easier in Blueprint) :

The idea here is to block the inputs of the player (EPC is my PlayerController) and then play the AnimMontage. I set a Timer to re-enable the inputs at the end of the animation. If you just do that, here is the result :

No exactly what I wanted. What happens here is that my anim slot is setup before the Aim Offset node in my AnimBlueprint. Therefor when the full body animation is played the anim Offset is added after on top. So if I look at the ground and then play an animation where the head of the character look down as well, it doubles the amount of rotation applied to the head... which makes the character look between her legs in a strange way. Why doing the aim offset after ? Simply because it allows me to blend in and out very nicely the camera rotation. If I applied the animation after, the blend in time of the Montage would have been too harsh. It would have been very hard to balance between quickly blending the body movement and doing a smooth fade on the head to not make the player sick. So the trick here is to also reset the camera rotation in the code while a Montage is being played. We can do that because the montage is disabling the player inputs. So it is safe to override the camera rotation. To do so I added few lines of code in the function "PreUpdateCamera()" that I mentioned earlier :

These lines are called at the beginning of the function, before the local camera rotation is computed from the PlayerController rotation. What it does is that it simply resets the pitch to 0 over time with the "RInterpConstantTo()" function. If you do that, here is the result :

Much better ! :) It should be easy to also save the initial pitch value and blend it back at the end of the montage animation to set back the original player camera angle. However in my case it wasn't necessary for this animation.

Last thing to mention. When authoring fullbody animations it is important to be careful with the movements that happen to the head. Head bobbing, quick turns and other kind of fast animations can make people sick when playing. So running, walking animations should be as steady as possible. Even if in real-life people move, looking at a screen is different. This si similar to the kind of motion sickness that can arise with Virtual Reality. It is usually related to the dissonance between what the human body feel versus what we see. A little trick I use in my animations, mostly for my looping animation like running, is to apply a constraint on the character head to always look at a specific point very far away. This way the head focus on a point that doesn't move and, being far away, stabilize the camera. 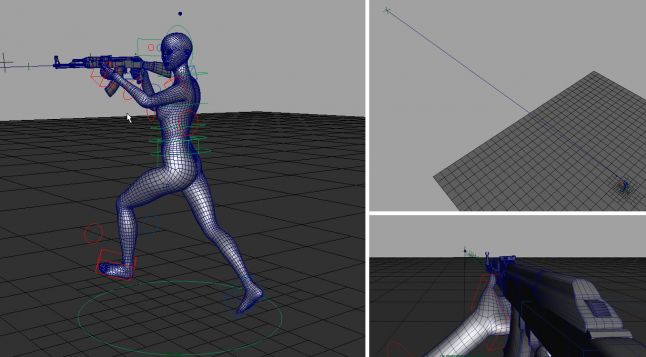 (I used an Aim constraint on the head controller in Maya)

You can then apply additional rotations on top to simulate a bit the body motion. The advantage is that it's easier to go back and tweak in case people become sick. You can even imaging adding these rotations in-game via code instead, so it can become an option that people disable. That's all !