In this article I share my thoughts on how to think about bugs, how to get rid of them, and how to get better at it.
Herman Tulleken
Blogger
February 27, 2017 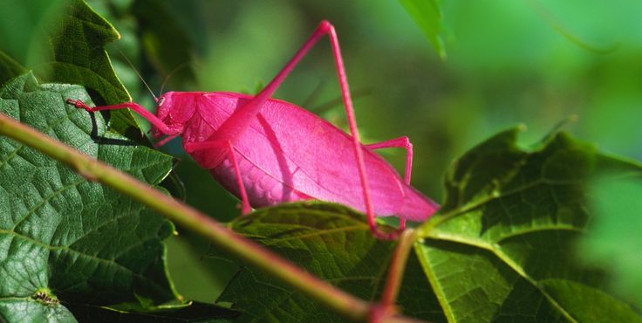 A bug is when a program behaves in an unexpected way.

Bugs ruin games for our players, and a lot of our processes are designed to decrease the number of bugs that end up in the final product.

One part of that is fixing bugs – an important programming skill. In this article. I share my thoughts on how to think about bugs, how to get rid of them, and how to get better at it.

The main points I want to get across are:

🐛When I hit play, I expect to see my avatar, but instead I don't.

We would be surprised if a game with this bug had code like the following:

//Hide the player when the level loads

More likely, a less direct problem in the code leads to the behavior we see. We call the observed behavior the symptom.

To find the cause, we must find out why it happens. And then why that happens, and so on. This list is the causal chain that leads to the bug. The causal chain for the bug above may look like this:

(Symptom) 🐛 When the level loads, I expect to see my avatar, but instead I don't. Why?

The first cause outside the software that we can change, is the external cause, and is where we can stop our chain. The external cause of any bug is always one of the following:

The tree of possible causes

When we are confronted with a bug, we do not know the causal chain of the bug. Instead, we have a tree of possibilities. A partial tree for the bug above, may look like this: 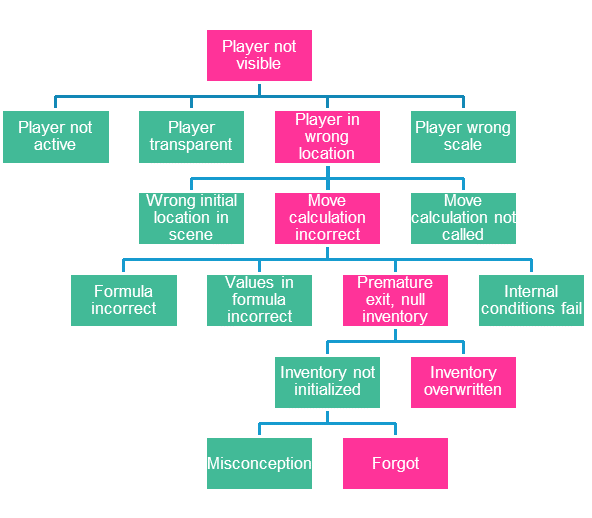 To find the cause of a bug, we must move down this tree to the root cause. At each level, we do experiments to rule out all but one of the possibilities. We then expand this node by listing all its possible causes, and repeat the process. Eventually we arrive at possibilities that are all external. The cause just above this is the root cause.

Computers follow deterministic rules, and when computers fail, there is a reason, and by systematically working our way through the possibilities you can always find the reason.

Some steps need a dash of creativity, but effective debugging is a systematic process. You need to understand cause and effect, make analytical inferences from the knowledge at your disposal, organize tasks in an efficient order, track your progress, and record findings for future usage.

The separation of diagnosis and intervention

(The term "intervention" may be a bit odd; I use it because all words like "fixing bugs", "removing bugs", etc. refer to both aspects.)

There are two important reasons to keep these processes separate in your mind.

Be precise when formulating a bug description

Standard bug report format. Vague reports of bugs introduce an unnecessary extra step into the debugging process: figuring out what the bug actually is. You and your team can avoid this by using precise language when talking about bugs.

🐛When I did X, I expected Y, but instead got Z.

🐛When I collected a new sword, I expected to find it in my inventory, but instead my inventory was unchanged.

Use this format, even when informally reporting bugs, or when formulating the bug to yourself. This format

Some types of behavior are harder to frame in this form, for example bugs that are sporadic, are seen at unpredictable times, or involve frequencies. Here are examples of dealing with this:

🐛When jumping, I expect to come down again, but sometimes (3/10) I keep rising and I must exit the level to continue.

🐛When I start the second level, I expect to continue playing, but instead the game exits at a random point before the end.

🐛When I run the game 10 times, I expect each of the two monsters to appear about 5 times, but instead the green monster appears 8 times.

Standard tests. You can also gain from using formal, named test cases, which allows efficient communication of what breaks where. For example, if you have a flow chart of the player login cases, with labeled nodes, you can say:

🐛When going through the login process through node A, I expected to reach node B but instead an error message displayed with the message "Already logged in".

Vague expressions. Vague words, like these below, confuse and waste time. Avoid them, and train testers to avoid them too.

To fix a bug we can follow this process:

At any point in this process, you may decide that continuing would be too expensive, in which case you "give up" on trying to fix the bug, and instead implement a workaround, or leave it as a "known issue".

The first step towards removing a bug is to follow the reproduction steps and verify that you see the bug. Reproducing a bug is important:

This step also allows you to gather more information, and to see if you can simplify the reproduction steps.

List multiple possibilities. Once you managed to produce a bug, you may already have a suspicion of what causes it and may be tempted to try to fix it at once.

Don't give in to this urge. Instead come up with at least a few possible causes first:

When you cannot list causes. At times, you may not be able to think of any possible causes, perhaps after you ruled out all causes on the original list.

This happens when you lack information, or knowledge, or creativity. You can deal with this by:

The last two strategies take time, and occasionally you may consider the bug "too expensive to diagnose".

Direct versus deeper causes. When listing possible causes for a bug, you need to list direct causes. Although we want to expose the root cause, if you start guessing at root causes you will have too many possibilities to test.

For example, not initializing a variable is a common root cause, but it could be the cause of any bug.

Start with direct causes – in Step 6 you go to the next level.

(Shortcuts are possible, but unnecessary.)

An experiment is some action that gives you information about the source of the bug. Examples of typical experiments are:

Good experiments are tests that rule out possible causes.

How do we rule out division by zero? We clamp the divisor away from zero and see if the bug is still there.

How do we rule out bad data? We replace it with known good data.

How do we rule out a piece of code is not being reached? We put a breakpoint and see if it is hit.

How do we check whether a calculation is wrong? We replace it with a hand-calculated result.

How do we rule out that we forgot to hook up a handler? We check.

Step 4: Order experiments to reduce the expected time to diagnose a bug

Don't do experiments in the order that they occur to you. Instead, assign rough time estimates to experiments, and likelihoods to the causes they rule out. Then put experiments first that are quicker to do, and rule out likelier causes.

Don't take the time of interventions into account when you decide on the best order. In the end, you will implement only one intervention, and no matter what order you follow, the time it will take will be the same. Therefore, it should also not affect the order.

Step 5: Do the Experiments

This step is straightforward: do the experiments in the order you decided in the previous step, and stop once you have the culprit cause.

Step 6: Drill down to the root cause

If we are at the root cause, we can continue to the next step.

Otherwise, the cause we uncovered in the previous step is treated as the new bug. We reformulate the bug in the When X I expect Y but Z-form, and continue to Step 1. Reproducing the new bug is a sanity check to make sure you are on track.

How do we know we are at the root cause? If we ask "why", and the answer is:

If we do not know, we are not at the root cause yet.

Once you are sure what causes the bug, you can fix it. Usually, you should implement the intervention to take care of the root cause.

Consider the example bug we examined before, with this causal chain:

🐛When the level loads, I expect to see my avatar, but instead I don't.

This bug can be "fixed" in any position in the chain.

The fixes will all "work", but they are not equal.

Fixing bugs at the root cause is usually the safest thing to do; if we don’t we invite other bugs into the system. If you do not initialize the inventory, you will need to skip over operations with it all over the program.

At times, fixing the root cause may be too expensive (for example, if you have to redesign the architecture of your game to ensure a predictable initialization order). When this is the case, consider implementing a workaround at a surface.

Step 8: Clean up and verify

The last step is to undo any changes you made during the diagnosis proses, and to verify that the bug stays fixed afterwards.

Some of your diagnostics may be useful to keep for the future:

Building zero-defect software is very expensive, and a counter-productive strategy for games.

But bugs are not only bad for the players if they land in the end-product; bugs – even small bugs – that live in the code-base during development are problematic.

Recognize bug patterns and use generic strategies to deal with them

A few types of bugs crop up regularly, and these bug patterns have similar debugging strategies. Here are some examples:

Here is an example of an instance of the first of these:

🐛When I press the "Play" button, I expect the game level to load but instead nothing happens.

We can use generic strategies to diagnose these bugs:

I listed 5 common patterns above, but you will spot other patterns in your code base. When you do, develop and document a strategy to debug these very quickly.

When tracking a pattern bug, and your strategy fails, remember to update the strategy. Patterns with strategies that become too complicated as they are updated after several failures seize to be useful patterns, and need to be pruned from your collection.

How to become a better debugger

There is no shortage of bugs to fix, and over the span of a career you will get plenty of opportunities to practice.

If you are a new programmer with some time to spend on technical self-improvement, it may be worth doing a few weeks of intense debugging to experiment with processes and techniques. Delve into a code base, or answer questions on GameDev StackExchange.

Another way to practice is through an exercise we have been using in our studio.