SEARCH
A minimum of 3 characters are required to be typed in the search bar in order to perform a search.
Programming
9 MIN READ
Featured Blog

In this article I explain how I adapted a traditional technique from 3D rendering to achieve fast 2D shadows for a large number of light sources in the Unity game engine.
Rob Ware
Blogger
February 26, 2018 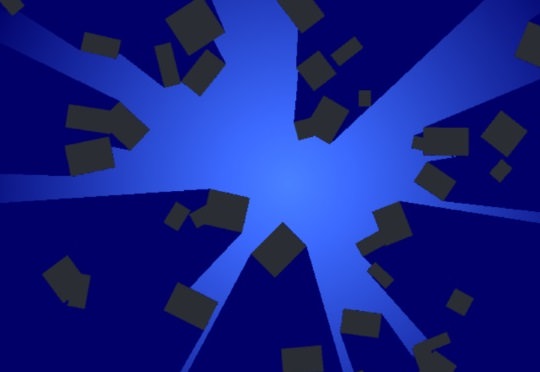 Recently I set out to create a 2D shadowing system for Unity which could be used in full game title. As all professional developers will know, there's a big difference between what can be achieved in a tech demo and what's suitable for integration into a full game in which the feature in question is just a small part of the experience. It needs to have a CPU, GPU and memory impact which plays nicely with everything else the game needs to do. In practical terms this varies between projects but I wanted something that didn't cost more than a couple of milliseconds of processing time, and not more than a few megabytes of memory.

This ruled out many of the pre-existing shadowing methods that I could find. There were a couple of techniques commonly in use.  One would involve ray casting on the CPU to find the silhouette edges of light blocking geometry. Another  would render all the light blockers into a texture and then run a multi-pass ray-stepping type algorithm over the texture to create a shadow map. These techniques are generally presented with at most a couple of light sources, they certainly wouldn't allow me to have dozens of shadow casting lights without exceeding the budget requirements that I have outlined.

Instead I decided to create a 2D analogue of the way that most 3D games produce their shadows these days, that is, by rendering geometry from the point of view of the light source and creating a depth buffer which allows every pixel drawn later in rendering, to tell whether it is visible from the light source. This is the technique known as shadow mapping. In 3D this produces a 2 dimensional texture, whereas in 2D it produces a one dimensional texture. In the screenshot below you can see my resulting shadow map in Unity's resource view - but this is not for one light source, there are actually 64 - every row in the texture is a shadow map for a different light.

This method relies on polar coordinates to convert a 2D position into an angle and a distance (or depth) relative to another object.

// x is the angle in radians, y is the distance

The solid geometry which casts shadows, hereon termed blocker geometry is submitted as a line list. Each pair of vertices produce a pair of positions in polar space, and the pixel shader then fills in the corresponding segment in the shadow map, at each pixel only the closest pixel so far is stored, using the completely standard z-buffer test. It is not correct to simply interpolate the polar depth to produce the z coordinate in the pixel shader, this will produce curved shadows for straight edges. Instead you must compute the intersection point between and the line segment and the light ray at the current angle, but this is just a couple of dot products and a divide, so nothing too heavy for a modern GPU.

This whole thing would have been very simple were it not for one fly in the ointment - the big problem with the polar coordinate approach is when you get a line segment in polar coordinates which wraps around the 360 degree boundary. The usual approach would be to clip the line segment into two separate parts, the first part ends at 360 degrees, and the other part is the remainder of the segment, starting at 0. However a vertex shader takes one vertex and produces one result, there's no way to output two separate segments. The majority of the complexity in this solution is there to deal with this issue.

The solution is that actually the initial shadow map rows do not represent 360 degrees, they actually include an extra 180 degrees, that is from 0 to 540. A line segment is at most 180 degrees in polar space so this is enough to accommodate any segment which wraps around the 360 point. This means every line segment in still produces one line segment out, for the pixel shader, as it must.

The downside is that the first portion of the row (0 to 180), and the final portion (360 to 540), alias the same region in polar space. To test a pixel against the shadow map, you would have to determine whether the polar angle fell into this region, and if so, sample from two places and take the minimum of the two depths. This isn't something I wanted - the branching, and extra sampling, would be horrible performance-wise, especially when multi-sampling the texture for Percentage Closest Filtering (PCF), a technique commonly used to create soft shadows using a shadow map . My solutions was (once all the shadow maps rows are complete) to do a another GPU pass over the shadow map, resampling it and combining the first 180 degrees with the final 180 degrees. Since the shadow map texture is so small by normal frame-buffer standards, this takes negligible GPU time. What we're left with is a final shadow map texture where a single sample is enough to tell whether a given pixel is lit by a given light.

The main drawback in this system is that the blocker geometry needs to be in a special format, in order to detect and deal with the wraparound case. Each vertex on each line segment is actually like a line segment in itself, because it stores the position of the other end of the line. This means you need to either build the geometry in this format at run time, or off line, you cannot just submit the geometry you use to render with, but on the plus side once you've built the special geometry, at least you're not submitting any unnecessary data and thus efficiency is greater.

Another cool feature of this system, is that the final shadow map can be written back to the CPU and this makes it possible to do CPU based visibility queries without the need for ray casting. Copying the texture back to the GPU can be quite expensive, and although much awaited asynchronous gpu read-backs are heading towards us in Unity 2018, this isn't something you should do unless it's really needed.

In essence, this is how the algorithm works.

And here are the results. As a stress test, I set up 64 moving shadow casting point lights, with randomly sized light cones, moving between a number of rotating solid objects. 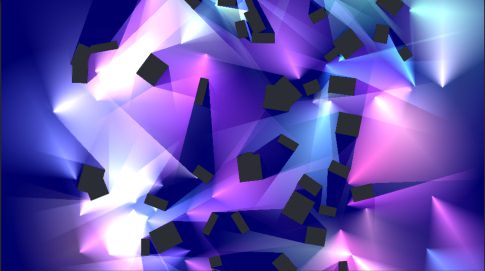 So what is the cost? Assuming your blocker geometry is static, and assuming that you use instancing, then the whole shadow map for any number of lights (subject to the limits for texture dimensions) can be sent to the GPU, in a single draw call. The amount of overdraw in the shadow map is determined by the complexity of your light blocking geometry, but since the texture is small compared to modern frame buffers, the GPU's cache performance should be fantastic. Similarly when you come to sample the shadow map, it's no different to 3D shadow mapping, except that the shadow map is much smaller.

Our game consists of a single large building environment, and we have 64 shadow casting lights active at all times, I use a shadow map texture of around 1024x64, and the costs are minimal within the overall frame budget.

If you would like to take the system forward, there are a couple of interesting possibilities. When the shadow map is processed to remove the overlapping region, you could take the opportunity to convert the values and create an exponential shadow map, and then blur it (remember to only blur horizontally otherwise unrelated lights would bleed into each other!), which then allows you to do soft shadowing without multi-sampling the shadow map.  Secondly, as mentioned earlier, the demo
currently does a separate draw call for re-submit the shadowing geometry for each light, but if you pack the light position and other parameters into a matrix, it would be trivial to do this in a single draw call with instancing.

Furthermore, I believe it would be possible to do one-bounce radiosity lighting as an extension to this system, with almost no extra work on the CPU side. This is based upon the idea that the GPU can actually use the shadow map from the previous frame to work out where a light's rays bounce in the scene. I won't give away further details just now, because I haven't actually implemented it yet. If it works, it should be far more efficient than the usual Virtual Point Light implementations which relies
on ray casting on the CPU.

It's also possible to use this system in other interesting ways. For instance, if you think of sound emitters instead of lights, then this system can be used to calculate audio occlusion. Or it could be used to determine line of sight to check for use in AI routines - in general, there's the potential to turn ray casts into texture lookups.

This concludes the implementation details for my 1D shadow mapping solution. If you have any questions, please feel free to ask in the comments section below.