Anatomy of a Memory Manager

A Memory manager such as malloc is the ultimate black box, you ask it for memory, and you get back a pointer (hopefully). But what is it doing under the hood? Here I cover the basics of how memory managers work, things to avoid, and some best practices.
Stewart Lynch
Blogger
May 20, 2013

Each new console generation has significantly more memory than the last. It’s tempting to think that in the next generation memory won’t matter. Whilst it’s true that memory doesn’t matter as much as it did in the 8bit days, I’ve yet to work on a game that didn’t have memory problems at some point during development.

The level of memory management I will discuss in this blog is at the new/delete level. By default this is handled by the standard malloc/free, but this can be overridden with a custom malloc replacement, such as dlmalloc, Hoard allocator, jemalloc or my own VMem allocator. Whilst all of these allocators have different performance characteristics, they all have some things in common, and it’s useful to have a working knowledge of what they are doing under the hood. Whatever you choose in your game, whether you stay with malloc/free or use a malloc replacement, if you are programming in C++ there are certain things that you should know about memory management.

A memory manager usually consists of at least 3 types of heaps:

Figure 1: A conceptual view of a simple memory manager

The fixed size heap consists of a number of fixed size allocators (or FSAs for short). They are called fixed size because each allocator only handles allocations of a specific size. So, for example, there may be separate FSAs for each allocation size from 0 – 256 bytes. When you ask for an allocation the memory manager will check if it is in this size range; if it is, it will select the relevant FSA and use that to allocate the memory.

The number of FSAs in a memory manager varies dramatically. Some memory managers only have FSAs from 0 – 128, others from 0 – 512, and some don’t have them at all. There are diminishing returns of going over 512 simply because there are usually not that many allocations of each size and the FSAs become wasteful of memory. However, if you know that you are making many allocations all of the same size and you suspect they are not going through an FSA, it is probably a good idea to route them through your own allocator.

Figure 2: FSA sizes. Note that the spread might not be even (and on 64bit systems each FSA size will be a multiple of 16 to ensure alignment). 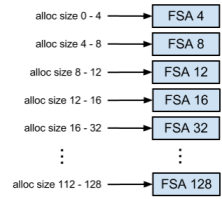 The benefits of FSA heaps are twofold. They are fast and they eliminate spatial fragmentation. I will discuss fragmentation in more detail later, so for now let’s focus on the speed. The way an FSA works is that it allocates memory from the system in large blocks at a time, for example one 4K system page. It then splits that block up into equal sized slots. These slots are linked into a free list. When this allocator is asked to allocate memory, all it has to do is to take one of those slots off a free list. When freeing it simply pushes the allocation back onto the free list.

Figure 3: Example of an FSA page

You may be thinking this is oversimplified, and you’d be right. Finding out where an allocation came from is a non-trivial problem. It’s too slow to ask each allocator if it allocated the allocation, so memory managers employ various techniques to get around this, such as storing information in each allocation, or comparing addresses against reserved page ranges. Freeing memory is often much slower than allocating memory for this reason; one of the differentiating factors between allocators is how they solve this problem. This is too detailed to go into here, but the take-away fact is that freeing memory is often slower than allocating it.

The coalesce allocator gets its name from what it does when it frees allocations. When an allocation is freed it marks the range as free. If the next consecutive range is already free, then these two ranges are merged, or coalesced, into one large range. Similarly, if the previous range is free it coalesces with that range. This coalescing is important because it prevents the free space from fragmenting, and means that it is less likely that large allocations will fail when there is memory pressure. This coalescing can happen immediately or can be delayed, but this is an implementation detail; there are benefits and drawbacks to both.

Figure 4: Example of a coalesce range and what happens when a range is freed 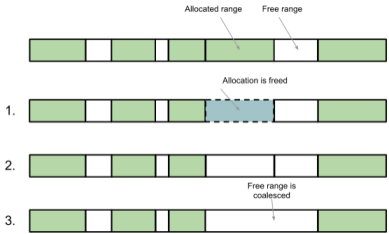 Memory fragmentation is an important consideration for all games, especially those on a platform with fixed memory. Fragmentation is basically the measure of unused memory that a memory manager has committed, that for various reasons probably won’t be re-used. Over time, the memory used becomes increasingly spread out, and the same amount of allocated memory takes up more and more system memory because of all the wastage. You may find that even though you have enough free memory to make an allocation, there isn’t a single free block of memory that is big enough to hold that allocation, and so the allocation fails. If you are not aware of fragmentation, the first you might know of it is when your game fails a long soak test a few weeks before shipping; certainly not the best time to find this out. It is generally accepted that most memory managers will plateau at 10% loss to fragmentation, but I’ve seen plenty of instances where fragmentation was significantly worse than this.

There are two types of fragmentation: spatial and temporal.

Spatial fragmentation happens in coalesce heaps. If the free space that the coalesce heap decided to use for an allocation isn’t exactly the right size, there will be an offcut. If this offcut is small enough it will be referred to as a fragment, and the important thing to realise is that unless the allocation is freed and the fragment is coalesced, the fragment won’t be re-used.

Imagine many thousands of allocs and frees and you can easily see how lots of allocation sizes might not quite fit and you are left with many small fragments of memory. Because allocations are usually freed in a random pattern, this fragmentation usually increases over time. In theory these fragments could be re-used because the allocation that caused the fragment could be freed, the fragment would be coalesced back into the free range and an allocation of the perfect size could come along and use the entire range. However, as we know, entropy is a fundamental rule of reality and this rarely happens.

It’s easy to see how FSAs eliminate spatial fragmentation. Because each allocator only deals with allocations of one size, no fragments are ever created. You might be wondering why we don’t just use FSAs for everything; as mentioned earlier there are diminishing returns as the allocation sizes become larger, because there are fewer types of allocation of each size.

Memory managers can’t do much about temporal fragmentation because they have no knowledge of how long each allocation will live for. This means it’s down to us to limit this in the best we can. The biggest culprit of temporal fragmentation is strings. Strings are usually small enough to go into the FSA heap, they are often long-lived and they are often created at random times throughout the game’s lifetime. For example, a level load will often result in a spike of memory. If a long-lived string happens to be allocated at the peak, you may find that the memory doesn’t return to its previous level. The easiest way around this is to route all string allocations through their own allocator.

Armed with this knowledge about the internals of a memory manager, we can come up with some guidelines on best practices.

It is better to do certain things up front, such as putting custom allocators behind your string class and particle systems. There are some things that should always be avoided, such as high frequency/short-lived large allocations. Other than that, it is best to periodically profile your game to see what needs attention. A good profiler will be able to tell you where your memory is going, the time spent in the allocators, allocator overhead, and loss due to fragmentation.

Optimising memory usage is a difficult task. It’s good to have general tips in mind whilst programming, but it’s also useful to have a better understanding of memory managers for profiling and fixing memory related problems. I hope this blog has shed some light on that black box of memory allocation.