SEARCH
A minimum of 3 characters are required to be typed in the search bar in order to perform a search.
Production
5 MIN READ
Blogs

got another console to round out my collection, and further empty my wallet
Ron Alpert
Blogger
December 10, 2007 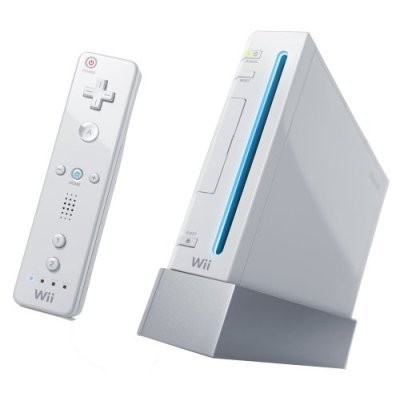 Yup, so last weekend was my girlfriend's birthday, she was asking me endlessly for Wii "I want wii, i want wii!!" -- of course, I broke down and succumbed, sigh. I got her the system with an extra controller (with wii play) and the extra nunchuk controller as well (as most know, it comes with a single remote and nunchuk - but this system is designed to be enjoyed by two, at least). I must admit i have not previously played wii at all, except for perhaps an evening about year ago at a friend's place. Not too terribly impressed with it at the time, but i could appreciate what it was good for either way. Anyway, we opened it up last night and played thru the two game collections - I have to say, it is definitely impressive! Long on looks, but satisfying enough for what they are trying to do, this is definitely a system that is friendly to non-gamers. My girlfriend has little to no interest in games, but she definitely has been getting addicted to the wii ones. She begrudgingly picked up golf and couldn't put it down, for a couple of hours! She and her friends were yelling and screaming as they were competing with one another - I guess it was a good idea, eh? I guess i will pick up a party game like Mario Party or Smooth Moves or something for her, next..

Weirder, I bought the same setup for my PARENTS for the holiday. My parents who've not played any kind of video games since the early 80s, they would play pac-man and centipede with me when I was a little kid. They have NO interest in videogames, whatsoever (well, my dad will try to pick up Pac-man now and again, my mother bought him a little TV Plug-in unit a year ago). So this will be the ultimate test to see if all the wii marketing is for real! Actually, I wouldn't have laid out the money if i thought it would be a waste of time, i do think they'd get a kick out of it (at least the bowling and stuff like that). I'll have to twist their arms to get started with it - we'll see how it goes.

Not much game news on my end, I guess. Another week of working hard, and waiting for my 360 to get replaced. The store I bought it from has a replacement policy, but at this rate I should probably send it to M$ and deal with them. Sigh.. pain in the ass!! At the end of the week, I may be the owner of a PS3, if not the week afterwards.. Otherwise, not playing much - just Gameboy B/W version of Tetris Attack, the puzzle mode. Thinking man's game.. "clear the level in 2 or 3 moves," sounds boring but it's well-put together and endlessly captivating. I have stared at it for a long time.. it makes me feel really stupid though. If I don't get on too late with writing this blog, I will likely refresh my Micro with some new games (at last!) It's been like 2 years since I have done that, and I still don't "need" to.. I stand by what I have said before, if all my other systems had to go, so long as I could hold onto my Micro then it would not be awful (I will be sad the day the special battery dies, though!!!)

Ebay-wise, I ordered Donkey Kong:Jungle beat for Gamecube (play it on the wii), it is a platformer that you control with bongos (!). I guess it was made by the same team that made Super Mario Galaxy (though, a couple of years earlier). It's got a lot of praise, and with the bongos it was pretty cheap - I look forward to firing up this particularly weird sounding game! I also ordered a copy of Wario Ware twsited for GBA (the one you have to twist the GBA around with - obviously). I enjoyed the very first Wario Ware GBA game, and this one is supposed to be the "best" one. Note that I borrowed the same from a friend, about a year ago - I had it for maybe six months, never even touched it even one time! But hey. I love weird, off-the-path games like that, and I was able to find it for about 10 bones.. why not.

I have Space Raiders and Mega Man:Network Transmission sitting in my cabinet, I was hoping to finally get some mileage out of them on the wii - no such luck, i need a non-wii-remote to play them apparently! I will have to dig one up, somewhere.. No hurry.

Recently I mentioned that I have acquired a TG-16, I brought it home but as it's lacking a proper controller, it sits waitin in abox. I found a direct-sales company that will let some new controllers go relatively cheap (cheaper than used versions on ebay!) so i will get one shortly. I have a CD unit with it as well, which I still have to check to see if it works !! I have been leeching old PCE ISOs off the net in anticipation, and found a guy who is selling a system upgrade card (to play Dracula X). Yeah, so nerdy, but it's cool - I always wanted one of these! I will be sort of surprised if it all loads, of course.

Work-wise, not much I can say (as usual). Lots of interesting times going on over at Obsidian, our Xmas party is a week away. Late this week will be the Pandemic party, which I'll likely show up at (along with abut a trillion other drunken marauding folks). Yeah, good to schmooze, esp. since no E3 this year, boo! I went to a Pandemic party 2 years ago, it was a wild mess - I expect this one will be along those lines, we will see. A bunch of late nights behind me from last week, hopefully the load will be a little easier in this coming one. Technical times too, might I add.

Alright! It is late. i wanna mess with GBA before passing out. Until next time..
Get daily news, dev blogs, and stories from Game Developer straight to your inbox
Subscribe