With the Nintendo's inclusion of its Webkit-based "Internet Browser" on its next-gen Wii U console, the potential to tap into a vast library of HTML5 games becomes a (distant) possibility.
Matt Hackett
Blogger
December 10, 2012

Several weeks ago Microsoft released Internet Explorer on the 360. In my article Play our HTML5 games on your Xbox 360 I discussed that browser’s HTML5 gaming capabilities and the impact it could have on HTML5 game studios like ours. Around the same time, Nintendo launched their next-generation console Wii U, which (after a ~3GB system update) also has its own internet browser.

This isn’t the first time web browsers have been available on gaming consoles. Nintendo’s previous console (Wii) featured a version of Opera called Internet Channel. Sega’s Dreamcast had a web browser more than 10 years ago! But now in 2012, HTML5 games are on the rise. Is Nintendo’s new browser capable of running them? 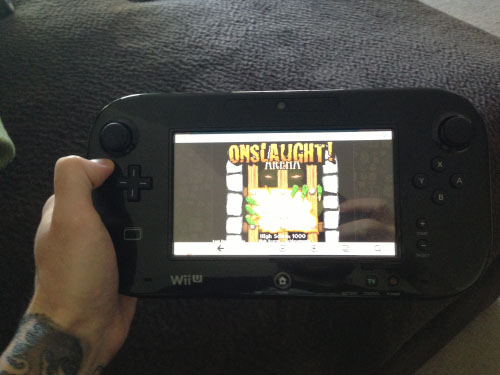 In the Wii U’s browser, I visited the Lost Decade Games arcade and was pleased that at least two of our games are playable out of the box. Here are some of the positive take-aways:

Remarkably, the browser also aced the Acid3 Test. Its rendering engine is slow but draws everything very well. Unfortunately, there’s a lot more to say about what’s bad. 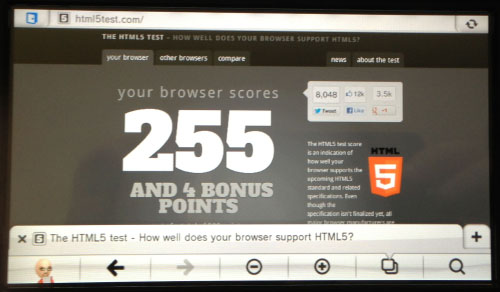 Using the online HTML5 Test tool (as well as a few of my own scripts), I compiled the capabilities of the Wii U browser. Here are some of those results:

An Audio object exists but it doesn’t support any standard audio formats (such as mp3, ogg, or even wav). Sadly there’s no WebGL support at all. Though the localStorage object exists and will accept commands to get and set data, the local storage data is wiped when the browser is closed, breaking its functionality completely.

It DOES play games! 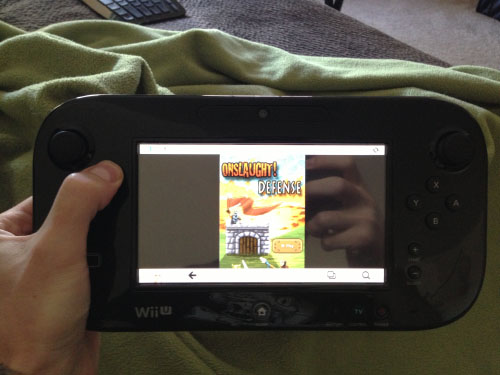 Although there’s no audio, you can’t save your game, and the framerate is terrible, two of our games are playable. Lunch Bug is even monetized via Google Wallet, though without a working local storage, there’s really no point in buying anything.

If you only end up playing only one HTML5 game in your Wii U browser, make it Onslaught! Defense. I added keyboard functionality today, and since the Wii U controller’s d-pad maps to the arrow keys, you can even play the game with the d-pad.

Lastly, here’s what seem to be the default browser commands of the controller’s buttons:

(Feel free to correct me if I’m wrong about any of these.)

The platform certainly isn't ideal yet, but it's easy to see how, with a little more development effort, there could be some real potential here.