SEARCH
A minimum of 3 characters are required to be typed in the search bar in order to perform a search.
Announcements
Event
Free Webinar on 5/24: How Predictive Analytics Drives Mobile Conversions & Boosts Revenue - Register Here!
PreviousNext
Production
10 min read
article

The Evil of Perfectionism

A reflection on the evils of a culture that values perfectionism, and why we shouldn't let it stop us from creating imperfect works.
Nicholas Lives
Blogger
July 08, 2020

Full Transcript of the Above Video Available Below:

Imagine you’re sitting down for a job interview, and this classic interview question comes up:  “What’s Your Biggest Weakness?” And your response is, “I’m a bit of a perfectionist.” It’s a classic answer, because really, it’s a humblebrag. It paints a picture of a meticulous genius, who locks themselves away in their tower for ages, emerging only once their work is, well, perfect. It’s technically a weakness of course, because in any real job, you won’t have all the time in the world to fine-tune something, and most people recognize that literal perfection is impossible. But you use it, because culturally, we are primed to LOVE perfectionists.

And I HATE IT.

Part 1: The Cult of Perfectionism

In the United States, you bump into perfectionism propaganda on a fairly regular basis. You might be familiar with this quote, from the mouth of Super Mario creator Shigeru Miyamoto: “A delayed game is eventually good, a bad game is bad forever.” This is a good summary of the kind of stuff you get fed all the time. It’s absolutely everywhere. Game companies like Blizzard and Valve have historically worn their extremely long development schedules like badges of honor, with Rockstar Games even proudly boasting about the rigorous overtime they put their employees through. Common sayings like “practice makes perfect” and “fail faster” make perfectionist viewpoints common knowledge. We romanticize the hell out of perfectionism, praise creators who value “quality” over all else, and who martyr themselves over the pursuit.

Famously, the developers behind the indie game hit Cuphead mortgaged their homes during development in an effort to complete the project, and when the story was told it always had this air of inspirational quality to it. A testament to the game’s “quality.” Like yeah, Cuphead looks amazing and it’s a fun game but damn, why are we celebrating the fact that it took nearly bankrupting the creators to make it? Was the end result really THAT worth it? Would the game have just failed to be valuable had the artists simply wrapped up the project when it became too risky and settled for what was good enough in the moment? The physical and mental health, social lives, or even just the preference of the artist to move on is seen as mutually exclusive to creating masterpieces. This is the mark of a true artist.

This mentality is more often than not coupled with the idea that by default, you kind of suck at what you do. You will always suck, and you can only strive to suck less. After all, you wouldn’t have to pursue perfection if you were already perfect. Therefore, the only great art of our world can come from those that recognize they suck, and keep their suck hidden away until it can be tweaked and beaten into submission. Cuphead wouldn’t have been as good, you see, if the same creators behind the good thing released a shorter or less polished version of it, because they had to wrangle out all that suckage! Can’t argue with that? 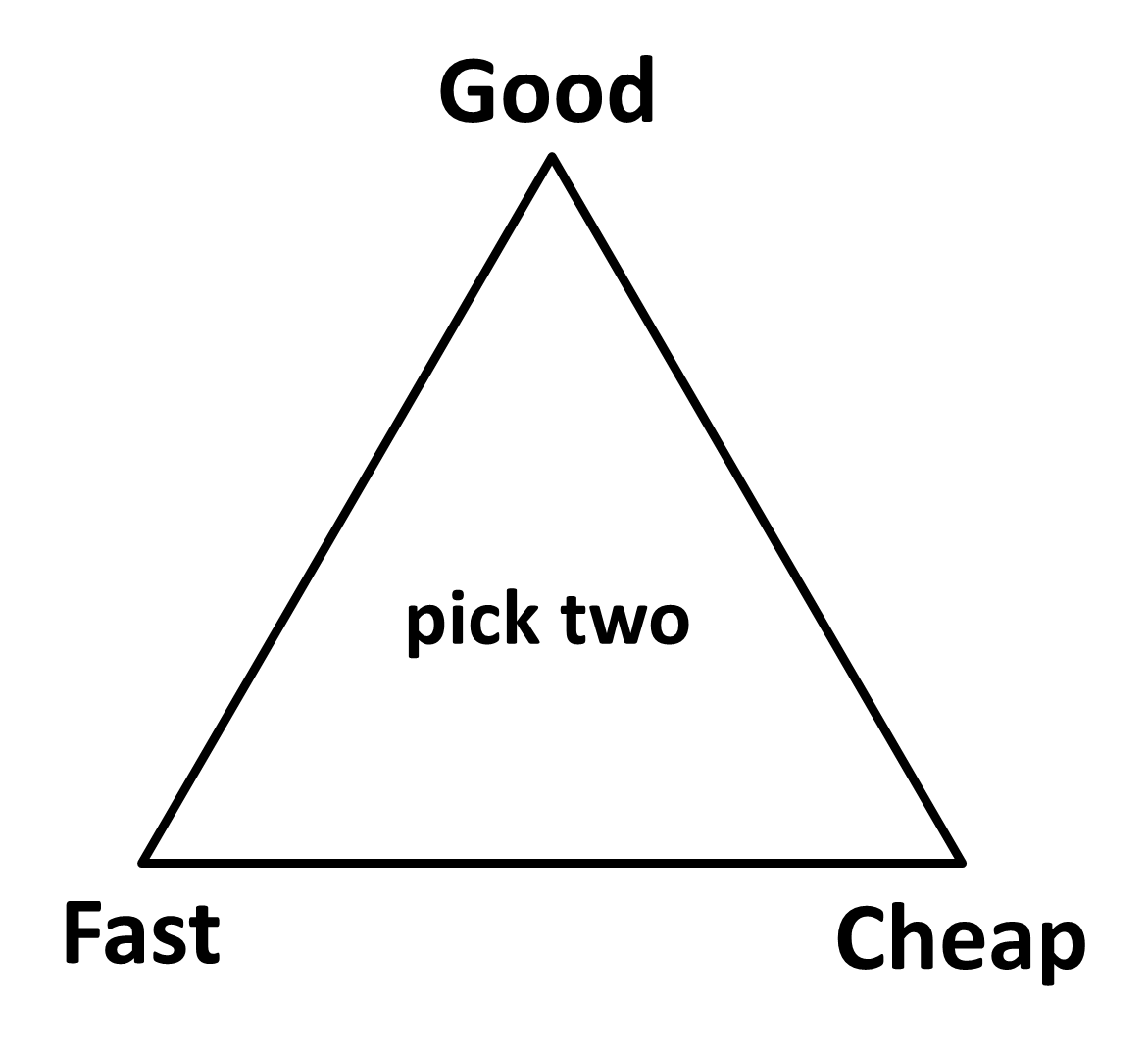 You may have seen one of these “quality” triangle diagrams before, and you’ll notice that in all of these, that “quality” is always correlated with more time or money. You may have also heard that time is money, which is certainly true here when it translates to man-hours. So - yeah. Time = Quality is just accepted as God’s truth here.

I hate this framing, passionately, in a way that is hard to properly convey. I don’t take issue with the logic so much as I take issue with the framing of what constitutes quality, here, and the effect it has on artists. Time = Quality, not because it always takes a lot of time to produce a quality work - which, by the way, it doesn’t, I’ll come back to that later - But because “quality work” seems to get DEFINED by how much time it took to make.

Say you’re looking at two paintings. One that’s kind of an abstract display of brush strokes and colors, and another that is a very realistic depiction of a person sitting. I think if you were to ask most people which painting they thought was “higher quality”, they would most likely pick the realistic one. Because that’s the one that looks like it took the most effort to make. The most training, the most labor, the most TIME.

Don’t get me wrong, this definition for quality, this “perfectionist,” labor-based outlook on art, is a valid one. I can’t tell you how to feel about art. But it’s not the only outlook, and this one in particular seems to dramatically overshadow everything else. I value expression, honest expression, in works of art. I LIKE work that hasn’t been overly labored over. Work that comes fresh out of the creator, spontaneous. I love filmmakers who fly by the seat of their pants, actors who roll with what they’re feeling in the moment, and game designers who on a whim decide the world map should be shaped like a dog. Not for any grand purpose, but just... because. There’s a certain raw energy and excitement you get out of an improv comedy joke that just isn’t there for something written, edited, and iterated on over time. Something hugely satisfying about a musician going off on a wild, unplanned musical tangent. I like seeing mistakes, seeing the human touch. Polish has a way of removing a lot of what makes a work human, of editing and refining until the work is our perfect idea of what art should be, removing a lot of the initial value. Value is inherent in creation, but from a perfectionist lens, that idea gets buried and replaced with idealized suffering.

Part 3: The Evil Side

The net effect of all this evangelizing and drooling over creating a masterpiece, is often that of silencing and shaming new voices. One of the reasons I was inspired to make this video was due to how often I’ve seen my artist friends bury their works for not being “good enough” for public consumption. How that desire to be seen as a “real” artist outweighs their desire to actually finish any version of it. Artist friends who get to be artists in name only, who simultaneously fear and bask in the warmth of perfectionism, because perfectionism tells them that their work is more valuable not existing than it would be to release “too soon.”

Perfectionism is a privilege. What if you can’t afford to spend all your waking hours laboring over details? What if you have family to care for? Several jobs to balance? What if you just want to give yourself time to enjoy life? The cult of perfectionism will tell these people that they just don’t care enough, that real creators are willing to put their health, finances, and everything at risk, because to release art that hasn’t had every ounce of their soul poured into it, is to be just another hack. Or at the very least, inferior. Perpetually inferior.

But hey, you don’t need to release your stuff that soon, right? I mean even a wage slave can toil away at their dream project with what little time they have for as long as it takes! Patience is all you need to be a perfectionist. Except, that doesn’t come free, does it? The world moves fast, and when we tell creators that their work will only have value if they lock themselves away for as long as it takes to make it perfect, we erase any ability for that work to be meaningful in the moment. especially if said person wants to at any point profit from their creation to, ya know, fund their livelihoods so they can someday think of creating full time. Timeliness can mean a lot in the marketplace. Just look at what the financial chances of releasing a hit retro-style platformer looked like a decade ago compared to now. If you were a creator wanting to explore that space and potentially earn a profit, guess you’re too late to the party. But if you’re a perfectionist, I guess you’ll just have to do without the benefits of timing, or else admit you’re releasing something of “lesser value.”

Finally, it’s worth returning to and examining why the seemingly most dominant factor of value in our culture also just so happens to favor those with the most time and money on their hands. How convenient, that the only way to achieve value through this “perfection” process, requires either paying huge teams that can produce something appropriately “polished” in a timely manner, or else takes years off someone’s life to achieve themselves, lowering their chances of success in the process. How convenient, that perfection is achievable only through wealth or suffering. This in no way teaches a cultural preference for big studio works or raises the bar higher than any individual could hope to achieve. I can’t possibly see how this would discourage people from expressing themselves in any manner they are told is inherently lesser.

As an artist and game developer myself, it’s always been difficult to put to words why I feel so put down by the very concept of “high standards” and this cultural emphasis on perfectionism. All through my art career I’ve always been content with my work a lot sooner than a lot of my peers, and understood this as meaning I had “lower standards” than others. I don’t hate my work enough to be a perfectionist, and it’s not because I think I’m perfect, it’s because I’m content with “good enough.” I’m human. The idea of only making a few masterpieces in my lifetime before I die is a haunting thought, and not one that appeals to me at all personally. But being prolific and still being validated as a real artist can seem like an uphill battle, because in doing so there’s an expectation that you necessarily should humble yourself to your perfectionist superiors. Your Pixars, your Blizzards. The true taste-makers. It’s phony, just a culturally acquired taste.

I encourage other artists to quit listening to these clowns. Don’t think that just because you can’t or won’t spend the time needed to dive in and round off every corner of your work, that it has less value because of that. Don’t think that in order to make something that resonates with people that you need to sacrifice some part of yourself to make it happen. Value is inherent in creation. And your voice is already enough. Don’t just “fail faster” to reach some imaginary threshold, fail PUBLICLY. Fail out loud. Because chances are, that “failure” will resonate with someone more powerfully than any theoretical masterwork, because your “failures” will get to exist.