Team Formation at the Guildhall at SMU

Team Formation on a TGP1 Project and the Guildhall
Benjamin Weber
Blogger
September 03, 2013

Our first team game production group came together very organically and did not require any sort of rigid structure in its formation.

As soon as we were given our groups, we met up and discussed our goals. We found that we had a number of common (if idealistic) goals: to be bug-free, have awesome gameplay, be innovative, and come up with an idea that was loved by team. From there we went into a couple days of brainstorming where we passed ideas back and forth ranging from an astronaut living his final moments in a black hole to our final idea which was based around a boy journeying through a forest as he recovered from grief. In the end, we reached a decision and set to work concepting the project in our respective disciplines. Level design came up with a description of the mechanics and examples puzzles utilizing them; art came up with inspirational concepts for our characters and environments; programming came up with a sandbox where a few of the mechanics were very roughly implemented. 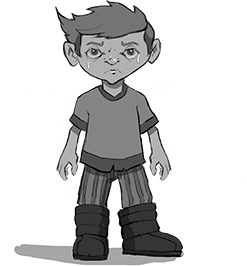 After brainstorming, we spent some time taking a team photo and debating our culture statement. We concluded that our culture statement discussion was more valuable than the statement itself and let it remain incomplete. We then worked as a group to flesh out the details of our game’s backstory, HUD, aesthetic and level flow with input from all disciplines. It may have been inefficient for getting into production quickly, but have all disciplines participate in all of the decisions ensured that we had a strong vision going forwards into the later stages of pre-production.

Our team came together well in the end, as we made it through the development process with no major conflicts. Our early in-depth group communication also made it easier to from everyone involved to be able to make judgments that matched the group’s vision of the game. Having a strong vision allowed us to avoid any major miscommunications throughout development.