Retro Game of the Day! Xevious 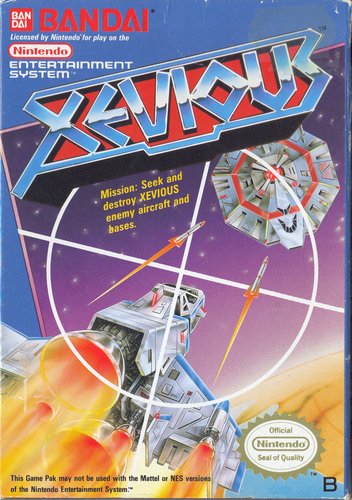 Xevious by Namco, 1982 release in the arcades. What's a Xevious? Why do they name things like this? Don't they want to make money?

Apparently, it did not matter what you named your game back in 1982 - if it looked this good, and featured a lot of fast-moving action and shooting, then it would make plenty of money. That's the conclusion I can draw now, after nearly 30 years of Xevious reissues (with never a "proper" sequel to it's credit, mind you)

This was among the first of the true "shoot-'em-up" generation which would become such a staple in videogames for the lion's share of the 1980s and 1990s. It might not look much, but at the time all it could be compared to were games showing primitive low-rez ship sprites against spartan black starfields. Suddenly the world was a lot more lush and colorful (and dangerous, with all of the ground cannon emplacements trying to take you out as well!)

The gameplay was also a little different than most shooters of the day - rather than merely using the standard forward shot, Xevious also employed a short-range bomb which fired with the same button press - you'd be firing in two dimensions, simultaneously. The standard shot would naturally travel the length of the screen, as expected, and register a hit with any enemy which crossed its path - the bomb drop would have to be deployed with more careful timing to hit a target (a reticule was provided to help gauge the distance, still this would require some practice and strategy to use effectively). 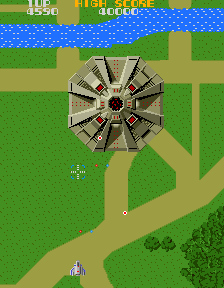 Long in the tooth games like Xevious are not going to do much to excite young folks today - it looks bone-simple, the features are nearly barren, the screen scrolls choppily along, the music is... jarring and the enemy patterns are hardly complicated. Still, for those willing to pick the game up, they will find an interesting challenge which, taken in the proper context, can still provide a good deal of fun! In the meantime, practice trying to pronounce the name of the game.. 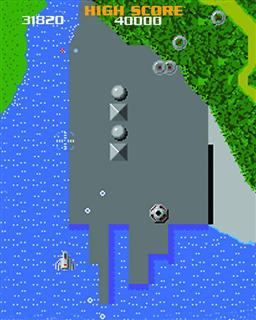