Retro Game of the Day! Warbirds 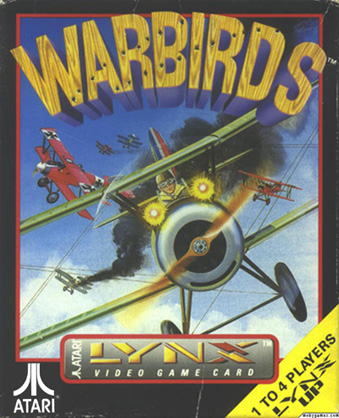 Warbirds for the Atari Lynx (Program & Design by Robert Zdybel), released 1991 by Atari.

Now here was a crazy game. 19 years later this may not look like much, but when I picked it up brand-new it was nothing short of revolutionary. 3D flying games were nothing new on the lynx (Blue Lightning set a remarkable precedent, at the system's launch) but where that game was cut from the cloth of arcade games like After Burner, Warbirds was much more closely patterned after a flight simulator (and a period piece, at that).

So what was so great about this game, then? The immersion! Running a flight sim on anything other than a powerful PC was pretty unheard of in 1991 (and seldom seen on consoles, either). This game plopped you in a "fly-anywhere" 3D environment, fighting a dogfight with your evenly-matched old-tech enemies. No missiles, no radars, no turbo - you had machine guns strapped to your cockpit, and you had your own eyeballs to line up your shots with. Likewise, you could duck into cloud cover to lose your foe, or attempt a barn landing if your ammo was depleted.

The presentation was simple, but everything moved around smoothly and "felt" appropriate. The game was sim-heavy, and therefore the handling of the biplane was clumsy and awkward to say the least - however this augmented the experience, it felt as if the designer really wanted to capture a sense of the feeling of what it was like to careen these woden hulks through the heavens. Warbirds was remarkable as a 1-player experience, but plugging in a cable to a friend's system was sublime. PVP in this fashion was still unheard of in those days, and dogfighting with a buddy in Warbirds was some of the most fun to be had on the Atari Lynx. An excellent game I will never forget!

We are attempting to reach for the stars with reddit! Help us out and "vote up" our cause! If you want to support good games and the people who love to make them, register and hit that up-arrow!