Retro Game of the Day! Trax 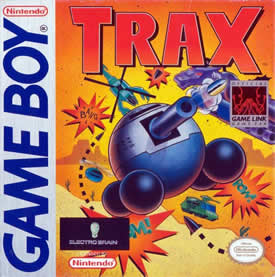 Trax for GameBoy by Hal Labs, released in 1991.

I often consider that we are experiencing something of a Golden Age of Gaming at the moment. There's so many "little games" available for a song, many are quite good quality, and can be had with little effort. It's wonderful in some ways, but also makes it difficult to dig through and find the gems (or almost-gems). In some ways I realize that the early mobile age of gaming was also a special time, more than I might have known at the time - lots of great little games were released on the 8-bit handhelds, many of them quite low-profile but still very enjoyable in their own ways.

Trax represents this period well. At a time when the gaming focus was on bigger 16-bit gaming, a lot of little black and white titles came and went on the GameBoy, and they were obviously put together without huge effort by small teams. In spite of this, strong arcade gameplay showed through and a gamer really could enjoy a "portable arcade" for the first time in history. Trax, with its very simplified aesthetic, recalled the likes of many top-down military shooters (specifically Iron Tank, but also comparisons to games like Ikari Warriors and Commando are appropriate for obvious reasons).

Trax was its own take on the genre, with a very obvious cutesy-bent (not merely because The House of Kirby developed this, also it was the trend to make very cartoony games on the GameBoy to make up for the tiny, limited display capabilities of the device). Unique to the game was the control method, D-Pad would steer, B button would shoot, and A would incrementally rotate your cannon. A bit awkward to control, but they made up for it with an extremely low difficulty setting. This hurt the already-short game, but again it was a GameBoy title designed for a "junior audience" and therefore not so cardinal a sin.

In the end, a game which did an impressive job given its constraints, and hinting at something possibly far greater had they pushed things a bit more. I love games like Trax, even if they turn out being small appetizers of games, they still play quite fun and inspire to this day. Worth a look for sure!

Want to win Free Apps for your iPhone? Easy as Pie! (LINK)