Retro Game of the Day! Transbot

Transbot by Sega, released in 1985 in Japan (a year later in the West) for the Sega Master System.

Back in the days of yore, consoles differentiated themselves by different "special features," accessories, or otherwise to try and make the other guy look lackluster. The NES had the Zapper and R.O.B. the Robot (and if any Retro Game of the Day fans can get me a copy of Stack-Up, I would greatly appreciate it, I have been dying to try that game for 23 years now!) The Sega Master System, on the other hand, had the Phaser (their light gun) and SegaScope 3-D Glasses. But originally, their big gimmick was "The Sega Card;" whereas standard games usually came on PCB cartridges, a select few were produced on wafer-thin pieces of plastic, about the size of a credit card. Whereas NES carts were mammoth, these sleek cards seemed very neat and hi-tech. 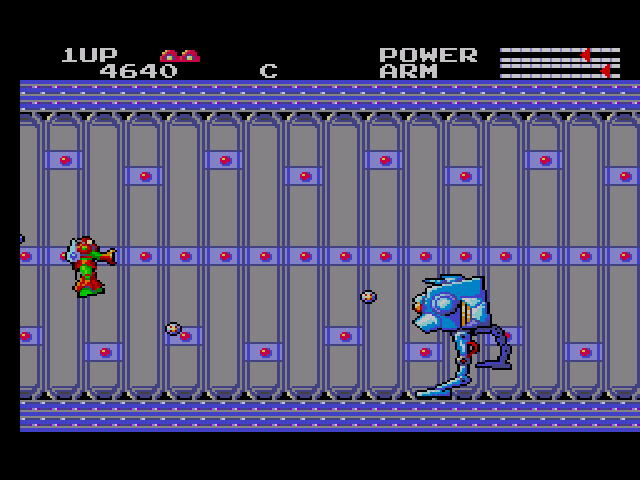 Of course, being pressed to a card back then meant your game was gonna be tiny, and that's what we got with Transbot. A very small, bite-sized action-shooter. Still fun however, especially when it was new. 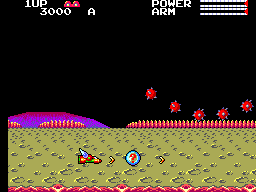 Nothing particularly noteworthy here, another Gradius knockoff (oversimplified) with some crisp graphics, bouncy happy SMS tunes and grating sound FX. As many SMS games did, they flexed the muscles of the system processor in this one with the fancy parallax scrolling background which just looked super-cool back in the day (only select Sega 8-bit games usually had this feature, and many arcade games as well; the NES' PPU wasn't so good at supporting that effect without some serious help, and so was seldom seen.)

A forgettable little game, and quite obsolete even a few years later. Sega's much-lauded releases of higher-tech shooter games like R-Type pretty much wiped the slate clean of games like this. Still, it's a fun little period piece with some pleasant shooting action, and a kick to drift back to the days when the Sega Card was in vogue (also quite upstaged by the PC-Engine/TurboGrafx-16 HuCards some years later).