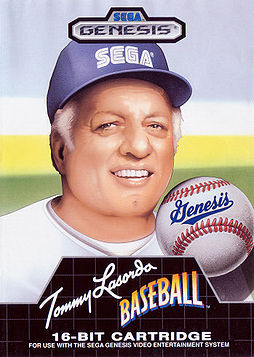 Tommy Lasorda Baseball by Sega for the Genesis, released at the system's launch in 1989.

At the Sega Genesis launch, they were trying pretty hard to position themselves as "your big brother's video game console" and immediately they snapped up a small, although solid lineup of sports titles to help support that. In the 1980s, baseball games were a pretty popular genre and it was important to have a quality title to show their new system off.

Tommy Lasorda was a great-looking and very solid-playing arcade take on the sport. It looks quite drab now, as even the next generation of 16-bit baseball titles were significantly more advanced - but this was a breakthrough compared to the 8-bitters which immediately preceded it. Lasorda looked and sounded like a genuine arcade game, this was the real deal.

It was full of nice touches - hit a nice pop and your ball would shoot straight up towards the camera, nail a grand slam and the ball would bounce out past the stadium into the parking lot. After a game wrapped, you'd see a report of the game on the evening news. And of course the digitized sound of the ump's voice was crystal-clear. This was quite remarkable! To top it off, the gameplay followed the aesthetic quite nicely. The game played very smooth, it was very easy to bat, pitch and field (unusual in a lot of arcade baseballs at the time) and therefore the game was just a joy to play.

This game came out during a time when a celebrity endorsement was "enough," most of these games contained no league licenses or real players or actual stadiums. That didn't matter, waking up on a sunny Saturday afternoon for a few innings of Sega Baseball was an excellent way to start the weekend before heading outside with your buddies for the real thing.