Retro Game of the Day! The Legend of Kage

The Legend of Kage by Taito, original arcade release in 1985 and ported to several consoles (notably the NES) in 1987. 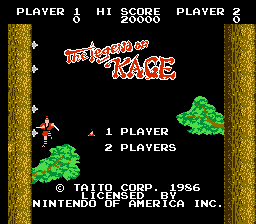 There was a time when the Ninja-themed platformer was among the most popular style of experiences to appear on the gaming scene. Legend of Kage ("Ka-jey"), or "Cage" as we Americans improperly pronounced it, was an early entry into this period, preceding more popular titles such as Shinobi and Ninja Gaiden. You are a lone ninja battling across ancient Japanese countrysides, desperately trying to rescue your kidnapped sweetheart from her kidnappers. 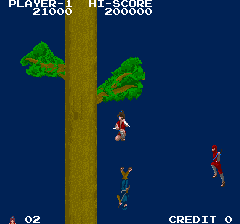 In spite of its age, Kage was still a fun, intense action contest. One button launched shuriken stars, the other swiped with your sword, and pressing up would cause you to jump - very high. Like an old kung fu movie, your character possessed near-superhuman agility and would regularly be bounding through the treetops as if it were nothing! 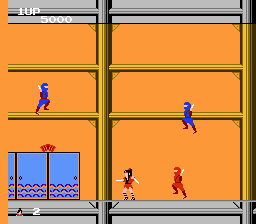 The game is very simple in presentation, with a constant swarm of enemies coming at you from all sides. You need only to survive and dispatch as many as possible, scrolling the playfield along, to advance the game. The platforming elements were quite primitive compared to the more elaborately-designed titles that would release later, but at the time this was very exciting. 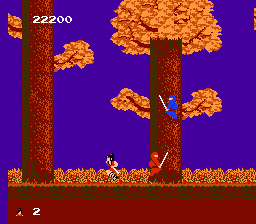 Kage feels like an epic, classic struggle taking place against an exotic, feudal backdrop. It's not mentioned much now, but at the time it was a bit of a standout and its themes are timeless. It does still hold up as a tight game with a lot of intense action, and it is still fun to play!