Retro Game of the Day! Sword of Sodan 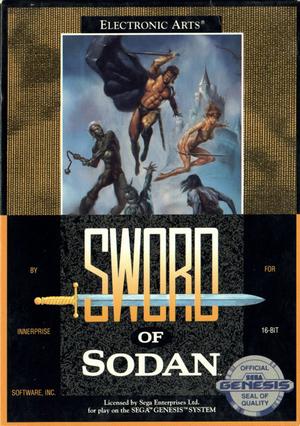 Sword of Sodan by Discovery/Innerprise, published for Sega Genesis by EA in 1990.

Where to begin - this requires some backstory. I'll preface by saying that first of all, this is well-known for being a horrible game - but at the time (1st generation Genesis titles), any non-Japanese developed games for the system were immediately going to be called into question in the regard of quality; most were by EA, and generally they were unusual and sloppy (Budokan, Zany Golf, Populous) but they stood out compared to anything otherwise available at the time. Also, the Genesis release list was rather short overall, so new releases (crap or not) were met some kind of acclaim regardless.

Such was the world that Sword of Sodan was born into. Furthermore, this was a port of an Amiga game, one which had shown up as a feature some years earlier in Game player's Magazine. With it's 256-color palette, ginormous sprites, and brutal violence, the game (like many Amiga offerings of the day) looked head-and-shoulders above what any other system could produce (console, arcade, anything). We gamers drooled over titles like this - when it was announced that the game would be receiving a port to Genesis, it suddenly became one to watch for! 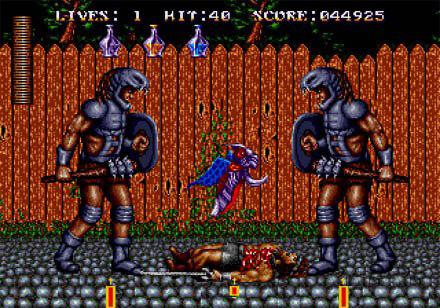 The game arrived - as expected for an Amiga port, it lost some of its visual luster, but still looked impressive enough (giant sprites, fairly detailed graphics, and oh yes, a little of the old ultraviolence). Unfortunately, the game just was not very fun. 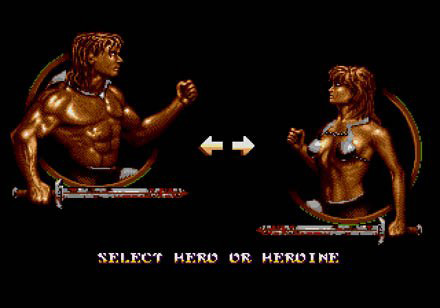 You controlled a warrior, "dude or chick" - each one rather deft with a sword, though you couldn't tell by playing this game! You walked left or right, stabbing away at your enemies - stab enough and they'll fall over and die. Some fallen foes will drop potions, which grant you different powers a more powerful fire sword, health recharge, etc) but mix them improperly and you could waste potion, or even lose health.

The game was horribly assembled with clunky controls, garbage hit detection, and outright gnarly level design. But at the time, it was different, it was violent (check out that beheading!) and it was there. It's not aged well at all, though when it released Sword of Sodan was noteworthy and fun to tool around with for a couple of hours.