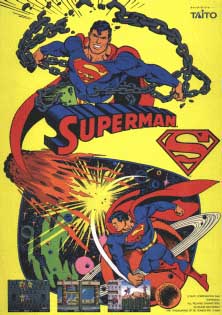 Superman by Taito, released in the arcades in 1988.

Oh, poor Superman. Poor, poor Superman. One of the most famous (and absolutely prototypical) superheroes of all time, he's definitely had his fair share of videogames based on him. But nearly all of them are terrible, or at least very disinteresting. Why is this? Superman isn't cool? I guess not.. 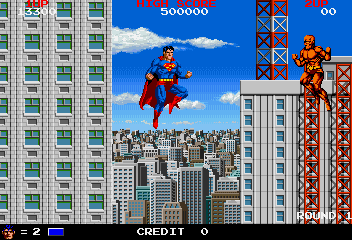 Growing up in the 1980s, however, was a different story. Superman was awesome. The movies starring Christopher Reeve were unbelievable - he was perfect for the role, the stories and effects were excellent, and honestly there'd just not been a "big deal" superhero movie before that so greatly affected our culture. Yeah, so things went downhill significantly with Superman 3. That's fine, the first two were more than enough for most of us.

And I believe, had gaming been more of a hi-tech priority at that period, we might have seen some semblance of a half-decent Superman game. Alas, it was never meant to be. Each one that came out was unspectacular, if not laughably bad. I'll give potential credit to the Sunsoft Sega Genesis title, which I've not yet played - I suspect it's at least passable. Save that for another day; onto the arcade! 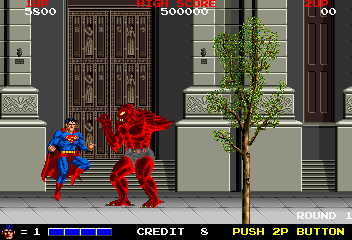 The arcade was a strange mishmash. Clearly programmed by a Japanese development team who didn't really know or care much about the Superman mythos, we got a bizarre beat'em-up where you walked/flew around the city streets, pounding the tar out of weirdo-looking monsters and robots. Standard fare, 1-dimensional move-to-the-right and attack stuff.. You could charge a "power punch" and of course throw trash cans and stuff. Occasionally you'd have a side-scrolling "shooter-type" level where you would use your heat vision to shoot things. 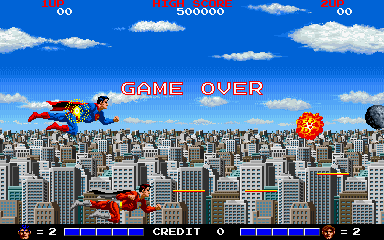 Interestingly there was a 2nd Superman for Player 2, just a recolor (comic book aficionados everywhere are so angry that this is never explained. Honestly, I am sure the developer didn't care "we'll get more money if it is 2 players!" The game is not bad, it's not good, it's just kind of there. Capitalizing on the name for some easy money (hmm like all the Superman games!) and drastically overshadowed by everything else available at the time.

It's a shame really. I believe a genuinely good Superman video game could be made, someone could make him cool again. This isn't rocket science. If someone paid me a bunch of money I could whip up a design document for a kicking Supes game in no time flat, but is this ever going to happen? Well, Rocksteady just made a hugely popular Batman game - so, never say never. Just don't hold your breath.