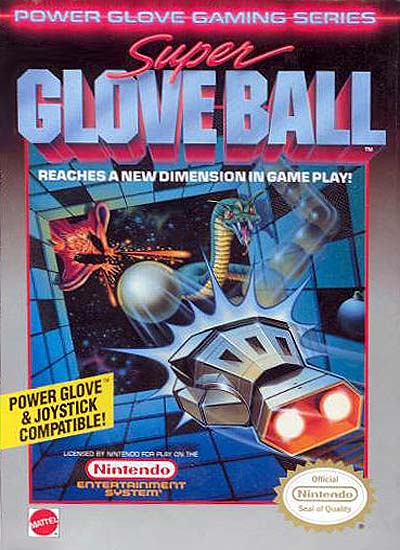 Today's game is none other than Super Glove Ball for the NES. Released in 1990 alongside the Power Glove "Revolutionary Gaming Peripheral," the game was published by Mattel and, interestingly, developed by Rare.

It's certainly worthwhile to look back at games like this, as they were part of a much earlier attempt to usher in the advent of "motion-controlled gaming" to the home console scene. Nintendo was feeling the heat of the 16-bit systems a little, so it helped to have wacky devices such as this to draw some attention away from the competition for a bit. 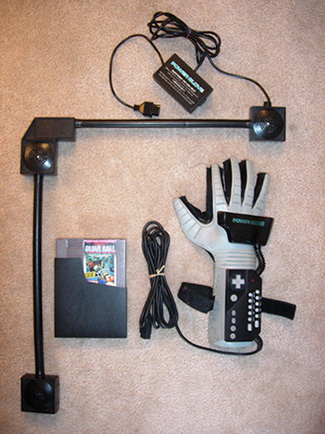 Here's what your Power Glove setup looked like - a crazy glove which connected to a sensor device with a wire, and the entire apparatus was routed to your NES control deck. Unlike the IR devices we use today, I believe there were some kind of sonics gauging the device's positioning in 3D space - there was also a special "tape" inside the gloves fingers which measured pressure and bending. It all sounded great on paper, but in practice it was very difficult to control. I never had a good experience with this controller. 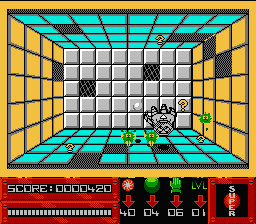 Super Glove Ball (and the other Glove games) looked amazing in prototype form in early issues of Nintendo Power (some of these screens were actually run in the advertising campaign - the final game looked dramatically inferior). The notion of what the game would be was marvelous, and the thought that you could play a game like this at home - on your Nintendo - seemed to be too good to be true.

As for the game itself, they simply took a lot of conventions established by Arkanoid (itself an expanded version of the brick-smasher Breakout, that game being a derivative of the OG Pong!). This game was different as the world was now truly 3D, with depth to play with. Rather than a paddle, you had a (strangely) 3-fingered disembodied mechanical hand. You'd catch and throw a ball into the screen, clearing the tiles to advance boards. Like Arkanoid, certain tiles would release special abilities (multiball, laser shots, etc) to help you clear things quickly and wipe out the nuisances which would pop up. I did enjoy Super Glove Ball for what it was - an Arkanoid rip-off. I "played" it maybe 3 times with the glove before giving up and sticking to the good old NES controller. This is not a game which has really held up, although it is noteworthy as an early example of a developer trying to push trendy motion controls for home videogames.

Want to win ANY Free App of your choice for your iPhone, care of Headcase Games? (LINK)