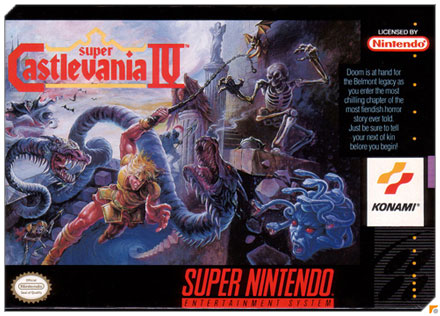 Super Castlevania IV by Konami, released in 1991 for the SNES. 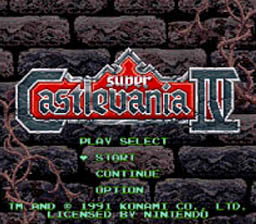 Here we have another iteration of the famous Castlevania series, this one was very notable as it was the first time the game received any kind of series audiovisual upgrade (unless you count the little-seen, inferior arcade edition). 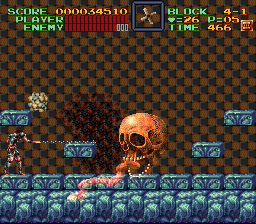 The awkwardly-named Super Castlevania IV (you figure they must have been trying to make sure you knew what system the game was being sold for!) also added some gameplay tweaks to the mix. Castlevania was always about advancing through the levels, powering up your 3-stage primary weapon (whip), and collecting secondary Item Weapons.

SCIV did away with the whip powerups and changed the way the whip worked - rather than a 1-button "whip straight ahead" solution, you could whip in 8 directions, also you could let the whip go "limp" and use it to deflect some projectiles.

Most importantly, you could now use it to key onto certain anchor points and swing around, somewhat, Indiana Jones style. This feature was seldom possible, but a nice gimmick at times. 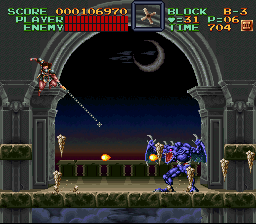 The game was obviously developed to be a showpiece for the system it was on, and they pulled out a lot of fancy stops to trumpet the fancy new hardware. Castlevania games always placed a lot of importance on the presentation, and SCIV was no difference.

The graphical look is kind of a mixed bag - a lot of the game looks very good, but many of the screenshots have a very cluttered look. Also, some animations in the game were a little inconsistent (including the main character). 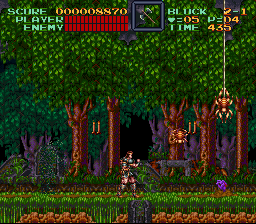 Aurally, Konami did an amazing job utilizing the SNES sound system. I would argue that few SNES games sounded as crisp, clear, and memorable throughout as SCIV. They really nailed the mood from the moment you booted the game up, until the end credits played. The soundtrack of the game was a little uneven at times as well, but always exemplary.

Super Castlevania IV is a game which has stood the test of time. It's not the best Castlevania title, probably not even the best 16-bit iteration (see here) but it is definitely up there with the best, and one of my favorite SNES games of all time. Very fun to play through!