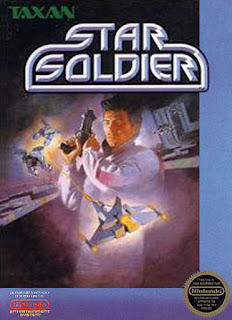 Star Soldier by Hudson Soft, originally released in Japan in 1986. 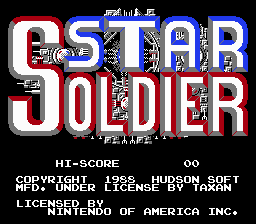 The first ("mostly") of an acclaimed group of vertical space shooters, Star Soldier was a stylish entry into the NES world. It was remarkable in that it was a seriously fast-action title pushing what seemed to be an otherwise slow and methodical game style (well-known games like Xevious were far less "threatening" and hectic from the outset). 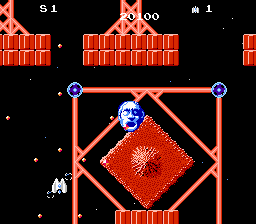 Star Soldier really followed a very traditional style of a well-worn sort of play - while it looks very bland by modern standards (and even then, it featured a fairly drab color palette and perhaps not the most inspirational aesthetic), the action was fierce and instantly the player knew he was going to be in for a superior test of wit and reflexes. 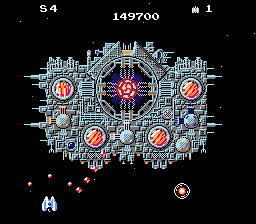 Periodically you'd come face to face with "Starbrain" (could much better names exist?), contrary to much of the rest of the game you could tell that the graphic artists did have a few tricks up their sleeves. 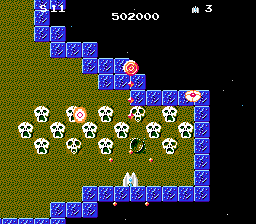 Star Soldier was "just another 8-Bit game" which somehow has lasted through every generation to make periodic reappearances, through Nintendo 64 up to the modern day PSP. I'd have to suspect most fans enjoyed the 16-Bit TurboGrafx entries into the series, where developer Hudson put out titles under this moniker which bore far more than a passing resemblance to rival developer Compile's extremely popular "Blazing Lazers" game. 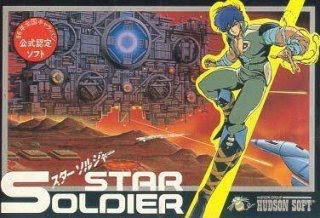 To reiterate, while Star Soldier might not excite the audiovisual senses, it does a fine job of presentation and will still provide an intense and engaging challenge for the shoot-em-up fan ready to test their old-school mettle. Give it a shot!