Retro Game of the Day! Stack-Up 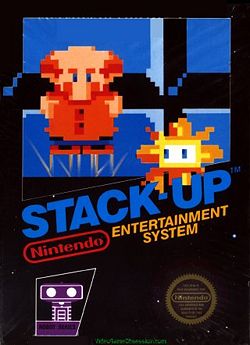 Stack-Up by Nintendo for the NES, released in 1985. 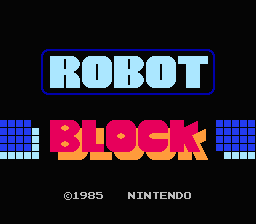 Many old fogies remember R.O.B., the accessory that was designed to make the NES look like a toy rather than a videogame console. The deluxe NES set was packed with a R.O.B. and a Zapper lightgun, and a game that took advantage of each accessory.

Gyromite (the R.O.B.) game was interesting in concept but ultimately unsatisfying in execution, and it was with some curiosity (and apprehension) that I sought out "the other R.O.B. game." 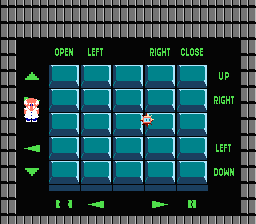 I did pick up a copy of Stack-Up at Toys R Us, only to return it the same day when I realized I had purchased a previously used game, and that it was missing some of the necessary pieces.

The box was bundled with several little holsters to plug into the robot's base, and round colored blocks to stack on the holsters.

Missing any parts would render the game unplayable, and since they didn't have any other copies in stock, I returned the game decided to pick up Popeye instead (a strange choice, since I already owned this game for my Atari 400). 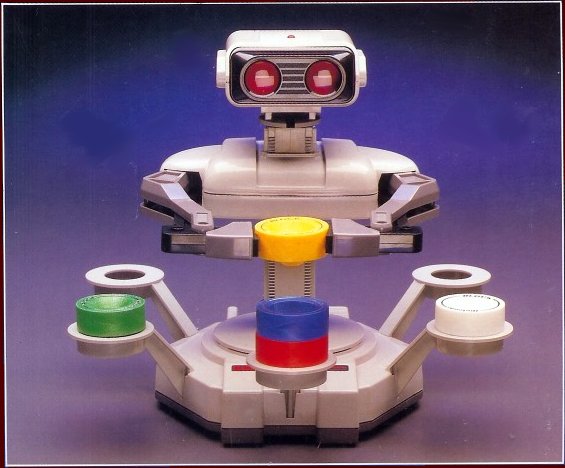 So then, what was Stack-Up all about exactly? A very different experience than Gyromite certainly, the game consisted of 3 "minigames" involving lifting and moving the blocks to different holsters, often in short sequence (or preventing blocks from all being to one side of the robot).

The game was just another follow-through supportive of the robot gimmick, and like it's predecessor does not seem that it was particularly enthralling after the novelty wore off.

Still, for collectors Stack-Up is one of the rarer "must have's" in the NES collection for many reasons. Even now, the image of R.O.B. with the different setups is striking and nostalgic, reminding us of a time when home video gaming was becoming new and different once more.

[Do you enjoy our iPhone game 180? Please help us out and download the recent update, and rate & review the game on iTunes (LINK). Even if you've rated the original version, please be sure to do so for the new update as this helps us out very much; we've got a very big promotion coming up shortly, and we need your support! Thanks!]