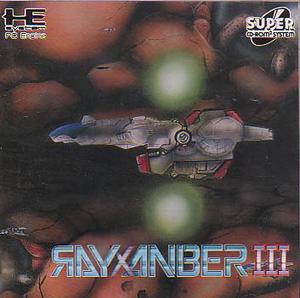 Rayxanber III is today's game of the day! Released for the PC-Engine CD-Rom in 1992 by Data West (JPN only)

So here we have another of those loads of shooters, with an appropriately strange name ("Raisin Bar!") The third one to be precise. And what does it all entail? Shouldn't be too hard to figure out..

Evidently, another ripoff of R-Type really. Not that it is a bad thing, as the game looked and sounded pretty good. Players of that game will undoubtedly appreciate the game's opening battle, which has you (and several comrades) exiting from a hatch outside of a mothership, not unlike the Stage 3 ship from R-Type - though in this case it seems to be your friend, not your foe (although it's not long for the world).

The game picks up from that point and goes through the paces. Not a terribly colorful blaster, and the music is not as hippy/techie as in some other games, but it still gets the job done. The game can be quite trying at times, and you're going to need some serious patience to work your way through the later levels if you're not a pro at these kinda games.

Overall, I suppose Rayxanber III is just another forgotten shooter, but hey, I always got a chuckle out of the name..