Retro Game of the Day! Pengo 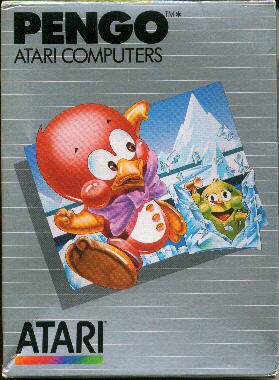 Pengo by Sega, originally released in the arcade in 1982. 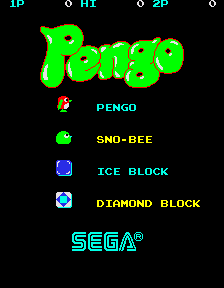 Developed by a company called Coreland, Sega published this colorful badboy way back in the day. Unlike his buddy Frogger, poor Mr. Pengo hasn't been remembered much since.. 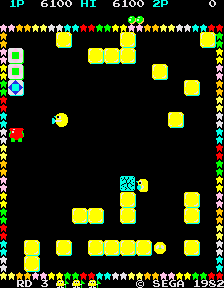 So, Pengo is a strange and difficult game. For me, it was cool because I liked the aesthetics; I thought the name sounded cool and I liked the marquee art. The gameplay itself (and onscreen graphics, and theme) were never really doing much for me. Maybe it's the time this game came out, maybe it wasn't terribly approachable. I am not talking trash on Pengo, it's not a bad game. But it's not too difficult to see why it's stayed buried in the past. 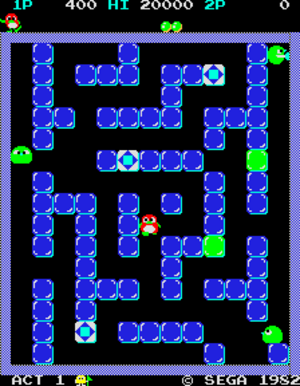 You control a little penguin who is being pursued by Sno-Bees (awesome name!) You can push ice blocks into them to crush them (combo this for big points!); alternatively, push special diamond blocks together for (bigger) points, or likewise to clear the round.

As mentioned, Pengo's not a bad game (and it really set the stage, ultimately, for Kickle Cubicle, one of my loved games from back in the day). It's a little difficult and not terribly easy to grasp at the outset, which counts against it - but it's got something going for it which makes me come back. Also, there was a much more advanced 16-Bit Megadrive version released several years later that expands on the theme and gameplay greatly, it looks great and I will have to review it down the road.