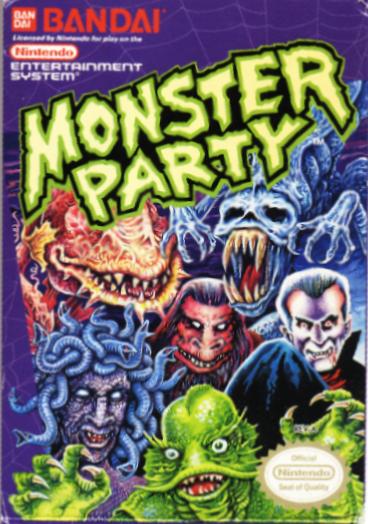 Monster Party by Bandai, released for the NES in 1989. 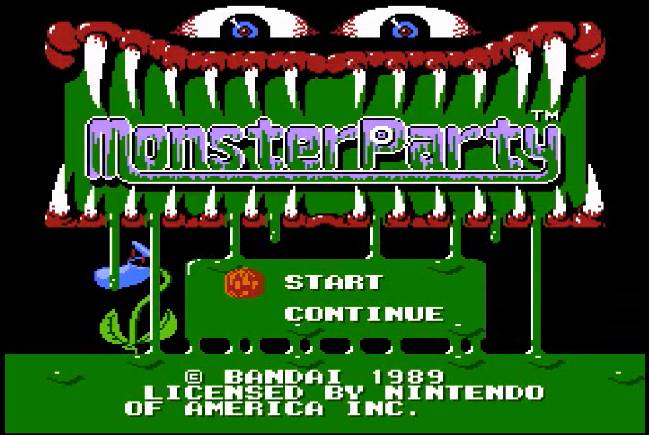 Absolutely one of the stranger releases to appear on the NES, leading up to its arrival the game was touted as a mix between Castlevania and Super Mario Bros. The screenshots looked a little bland, but this lead-in was certainly noteworthy.

I decided to give MP a rental to see what it was about. Whoa.. in one of the more out-there setups in videogaming, the yarn goes that you are a kid walking home from baseball practice one evening. A an armored-gargoyle-looking monster approaches you from the heavens, and asks your help in saving his distant "Dark World." You agree, and he scoops you up to return to his homeworld; and the two characters "merge" into a single body. You'll spend the majority of the game running around as Mark the boy, but temporary powerups will transmogrify you into Bert the Monster, capable of flying and shooting projectiles. 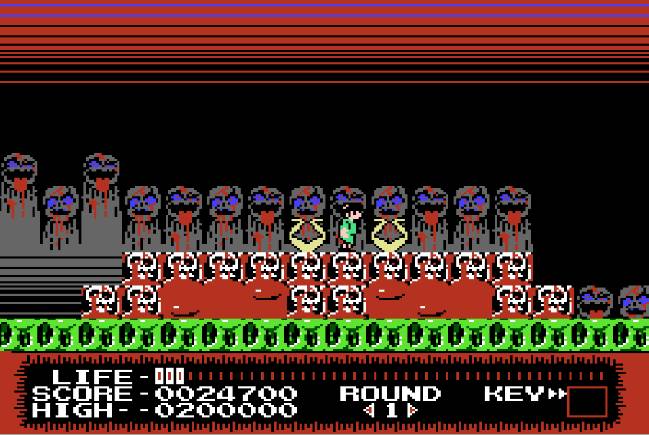 From that point on, the game just becomes strange. The monster's homeworld is covered with all manner of oddities, singing plants and dancing zombies and flying shrimp and medusa heads. The levels are typically coated with (very cartoony) pools of blood.

Levels are not terribly complicated, you simply run around and dodge the critters who would do you in - awkwardly attacking them with your weak baseball bat, though in some cases you can swing their projectiles back at them. The game is big, colorful and long, with a strange style (sometimes it looks good, sometimes it's a garbly mess). Overall the game has a look and feel all its own, with a particular brand of macabre humor not usually seen on any system at the time.

This has to be one of the stranger detours down the NES superhighway that you will come across, for one reason or another. It's not really a wonderful game, but the interesting premise and bizarre style certainly make it memorable (and it's got just about the creepiest ending you'll find on the system!) The game brings me back to a time when the industy didn't take itself too seriously, and unusual offerings like this could have a place in a console's library. I would love to see a 3D reimagining of Monster Party today, it's a great concept and a wonderful world that would stand out like a sore thumb against a lot of the me-too product otherwise filling the shelves.