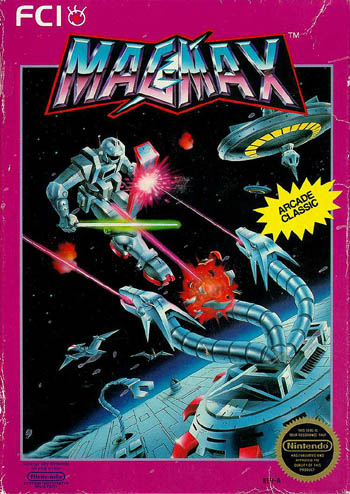 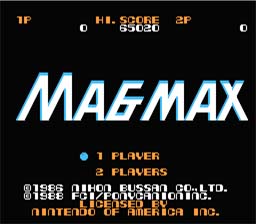 What's that? Isn't that the movie with Tina Turner? Oh sorry, that was Mad Max. This is something altogether different...

Mag Max is a pretty kickin' arcade shooter which I will suspect many of those who read this have never heard of. It was a fairly visually bland NES release early in the system's lifespan, but the arcade source material it was based on was just the opposite - it's use of heavy parallax scrolling (much like the game's arcade brother, Seicross, also by the same dev) was nothing short of fascinating to witness when the game was new, and still looks very unique and cool to this day. The game world consisted of two layers, above ground (with the cool scrolling effect) and below ground (more traditionally flat). 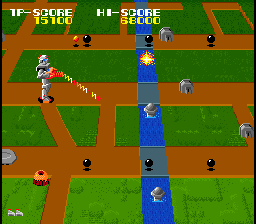 At your disposal was a little spaceship which, ultimately, made up the core of a very powerful super-robot. As you traversed a level you could pick up the different components (upper torso, legs, cannon) to form the ultimate combination with the best arsenal - unfortunately, this also drastically increased your vulnerability, so much care was required to properly maneuver (translation: you'd be losing your legs, and cannon, a lot). 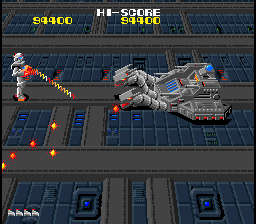 Mag Max is no easy game; it's not the hardest either, but it doesn't exactly throw you a steady supply of bones like some of its contemporaries (Gradius) did. You'd constantly be trying to power-up your craft, but you'd constantly be shedding them as well since you'd keep getting blasted. Still, the experience was quite enthralling, and it's a shame the developer faded away; their tech was unique and their strange little games were quite fun, even to this day. Recommended.