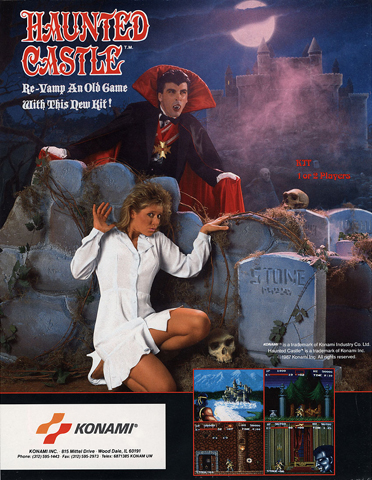 And so, here we have the somewhat famous arcade version of Castlevania - famous for so many reasons, not one of which that it is actually a particularly good game. Awww, yes, I just went there. 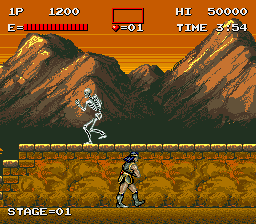 Preceded by several versions of the console/computer Castlevanias, this rendition of the huge franchise took things in a drastically different direction and made the whole thing quite difficult. Cheap, stiff, and unforgiving, Castlevania Arcade was not what one would call a pleasureable experience.. 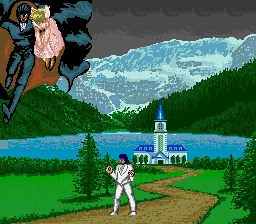 Well, I wouldn't go so far as to dismiss it as a horrible game. Its not - it just doesn't live up to the Castlevania legacy very well, especially considering the particular time and circumstances of it's development. I mean, what were they thinking; the NES games (particularly 1 and 3) were some of the best available at the time, and in those days home versions of games usually looked a far sight worse than their arcade counterparts. Given that this arcade machine was created following the NES originals, you'd think they would have played to the (established) strengths of the games and boosted the audiovisual experience up considerably, with some solid refinement of the gameplay. At the very least, try to match what worked. Instead, we got a below-average action game which shared the source material's theme, to some degree, but with lackluster execution. 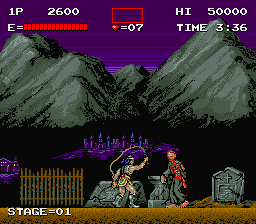 It makes one scratch their head, and wonder if there was just some bizarre politics at play (bizarre politics? In videogame development? Not hardly!) Well, it happens. Maybe this is the reason they branded it with the absolutely dull "Haunted Castle" moniker rather than take advantage of the name recognition factor. Or maybe Konami Arcade America and Konami Console Game Distribution America were having some spat that month to top it all off.. who knows.. 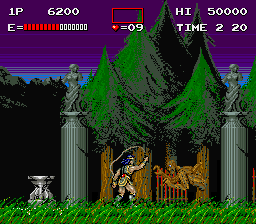 At any rate, the game is worthwhile for a look just to see what it is all about. It's playable, and those who love a good challenge with frustrating gameplay and awkward presentation might find something to mine here. As I said, it's a curiosity and definitely interesting to pick through, just don't expect this to hold a candle (ehhh, ahem, ahem) to any of the wonderful 16-Bit Castlevania installments, all of which are far superior. Hey, you've got to give it to them for at least trying to put something different out there!