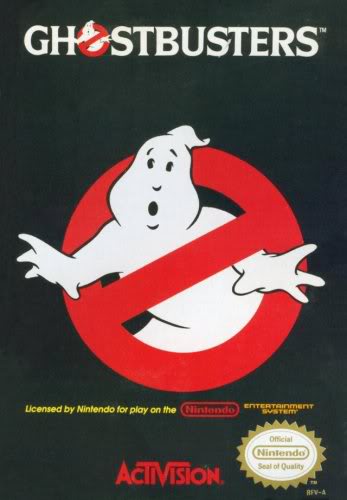 Ghostbusters for the NES by Activision, released in 1988.

Sigh. I dunno where to even begin with this one. It goes something like this.. Ghostbusters was one of the weirder-but-cool properties in the kid-friendly 1980s, evenryone loved the movie, the TV cartoon, yadda yadda. For some reason, a proper video game never made a strong showing. There was a PC version that released following the movie in 1984, but none of us console gamers really had exposure to that. Eventually Sega ported it to their "doesn't get much love otherwise" 8-bit Master System and suddenly they had some bragging rights, by virtue of just having a game with this name.

A couple of years passed, and I played a Ghostbusters arcade machine and this was just wonderful. The game itself, developed by Data East, was nothing to get too excited over in and of itself, but being able to finally play a standard action game as a Ghostbuster just felt really cool. Didn't hurt that it was a 3-player title (which was weird, but cool). All of a sudden it was announced that the GB's would be making an appearance on the NES. At last.. the boys were coming home.

Almost as quick as it was announced, I spotted the cartridge and at Kay-Bee and ponied up the $60 those bloodsuckers were asking. No matter.. this game needed to be mind. I sat down, fired up the ol' black and grey box, and let 'er rip.

And what I saw, when I played the game.. made me very disappointed. I was no fool, I didn't expect this to be a straight port of the cool arcade machine I'd been feeding quarters to; but I expected to at least be running around and blasting at some ghosts, I'll tell ya. What we had here was an exercise in frustration. Drive around in some awfully dull driving sequences, equip some arms and traps, and try to slowly maneuver your two nearly-uncontrollable (and lifeless) characters so that they could snatch a disinterested apparition and suck him into a box. Wash, rinse, and repeat, for hours.

It was disheartening, but my money was already spent and I was not going to let this godforsaken game beat me. I was going to do my time and see this thing through to the bitter end; the final scene, awful as it looked, felt strangely triumphant as I finally showed this crappy game who was the boss. This is how it went back in those days.. if you bought Ghostbusters, Hydlide, or Dark Tower.. if you were 11 or 12 and actually somehow managed to have enough money to buy one of these garbage games, you had to spend a good chunk of time at least seeing the thing through, even if it made you hate your life for a little while. There had to be something in there worth uncovering.

At the end of the day, Ghostbusters NES soured me on the source material for a good little while. I finally felt justified when Sega produced a 16-bit version that was actually a pretty fun outing, but I am sure I would have liked it more had my palate not been so embittered by this travesty. Anyway, in spite of it all I can't say the game was a total wash; it still has its' fans, and winning the thing gave me some kind of bizarre pride. Make of that what you will.