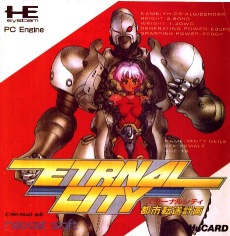 Eternal City by Naxat, for the Japanese PC-Engine (aka TurboGrafx-16 in the West). Released in 1991.

One day I'd really love to become a dedicated historian whose concentration is solely based on examining the line of software for the Japanese PC-Engine. They made sooOOOoooo many games for that console. The NES/Famicom had it's share of shovelware as well, but that came with time and legacy. I don't know how it happened in the case of a "smaller"/newer system as well, but any serious collector of the console will agree to the volume.

The point is, though there was an overload of these games, and they were not exactly brimming with originality (I would suspect there were probably a couple hundred outerspace shooters!), they all did have something going for them; they looked good. Video games have always been about putting a heavy emphasis on shilling nice graphics, and the PC-Engine was a perfect example of this to a high degree. Many of their games may not have played too spectacularly, but for awhile they were the best looking ones you could play at home by a wide margin.

This is exactly the case with Eternal City. It's a very uninspired running and blasting game, you control a "mecha suit" pilot and you run around killing all manner of robotic creatures. The game doesn't really have a captivating world, it's just there and it is pretty. It would be hard to sell this now, but at the time they could show a game like this off in the magazines and sales would be guaranteed. If they surrounded the aesthetic with some more interesting design as well, it could have been on it's way to actually being something of a classic. Games like Sega's E-Swat and Shinobi weren't particularly ground-breaking games for the most part, but they worked their aesthetics and layed a bit of interesting design around them; and here we are still talking about them, 20 years later.

As for Eternal City, the real shame here is the brand tie-in - sort of. Character designs were handled by Japanese Manga Artist Masamune Shirow, most famous for his creations Appleseed and especially Ghost in the Shell. One look at Eternal City and you can see his mark all over these characters, and it makes one's head scratch to think that there could potentially have been more involvement from an artist of his caliber. This guy was hugely influential in the groundbreaking 1980s manga scene, and still is one of my own personal artistic inspirations. Eternal City wasn't a bad one-off, it just feels like such a tease of "what could have been..."