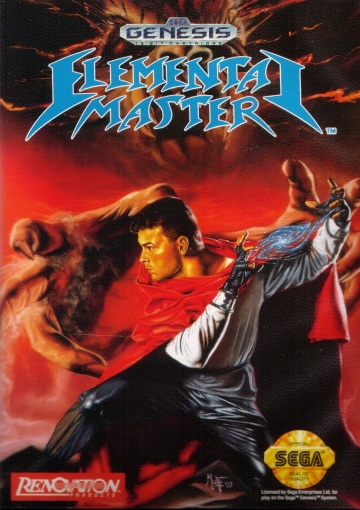 Elemental Master by Technosoft, released in Japan in 1990 and three years later in the West for the Sega Genesis.

Oh dear, look at that box art. It looks pretty silly - is that supposed to be Van Damme or something? I winced when I saw this on the shelf (but I had to pick it up because Technosoft, developers of favorite games of mine such as Herzog Zwei and Thunder Force II, was behind this). Surely the original Japanese cover must have looked better, right? 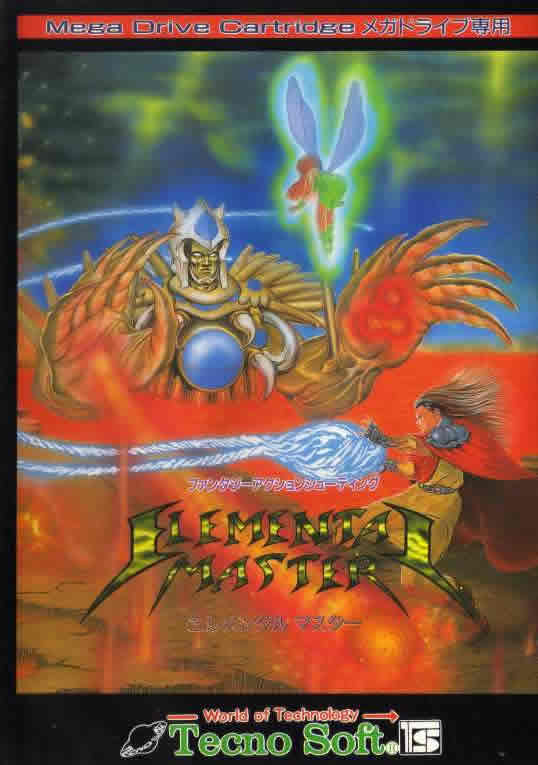 Ewwwww! Who in the name of Spain vomited up this atrocity! Let's talk less about the cover and more about the game, and then forget we were ever involved with this..

Elemental Master was a strange departure from the usual sci-fi-themed Technosoft fare. In fact, when screens of the game were originally shown to the West, they thought it was Thunder Force IV with a bizarre looking ship. Turned out that "ship" was a dude, this was a top-down shooter alright but you were controlling a little fella walking around over a fantasy landscape. It was programmed using conventional top-down philosophy, meaning he was always walking (as a ship would always be flying). 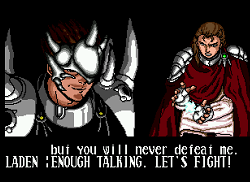 Weapons systems performed similarly to their Thunder Force predecessors - you could select from your inventory of different "techniques" with the press of a button, and the gimmick here was that you could blast either in front or turn around and shoot to your rear.

The game was alright. I would have picked this up no matter what it was, though I was disappointed by what I received. The action and presentation was hectic as expected, but the theme was murky and I didn't like the "demon world" style at all. The story/cinemas just seemed goofy and the whole affair was lacking Technosoft's usual coolness factor which dripped out of everything else they built. In spite of it all, this was still a fairly good game and a very competent blaster. It's one I would recommend picking up now for "something different" and it's a good challenge with lots of blasting action. Not for everyone, but if you can get past the awkward aesthetic you just might love it.