Retro Game of the Day! Battletoads in Battlemaniacs 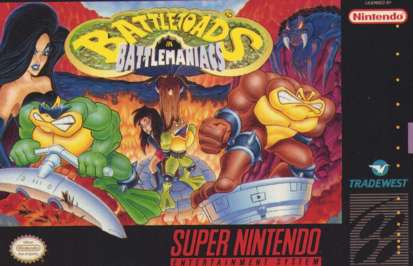 Battletoads in Battlemaniacs by Rare for the SNES, released in 1993. 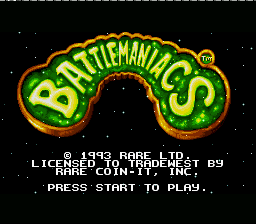 My-oh-my, where to start with this one! Battletoads originally appeared on the NES, and despite being punishingly difficult, was one of the more revered games of it's day. Excellent graphics and effects, interesting and varied design, and an overall unique and novel presentation helped to elevate it above the pack of many of the more forgettable TMNT-knockoffs of the day. 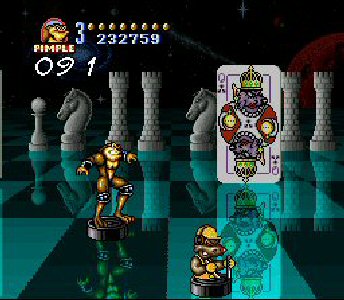 Now, Rare has alwas been an interesting (and often outstanding) developer. Back in the NES days, when - let's be honest - most Western-developed games were sub-par, many of the Rare-developed titles were often as much fun (and good-looking) as their Japanese counterparts. They each had a unique feel, style that was Rare's distinctive watermark, and it colored the entire experience of each title they got their hands on, in a good way. 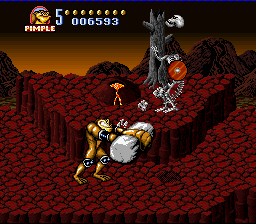 So then, the leap (pardon the pun) to 16-bit was interesting for Rare, this being their 1st title as far as I could tell on the platform, and especially with so high-profile a franchise as this; the "Rare Style" did not seem to make the transition to the next generation as well as one would have hoped. Yes, this was a proper sequel to 8-bit Battletoads, and the necessary audiovisual refinements were there. But it felt like an uneasy transition, the smoothness, the loving touches weren't as lovingly touched. It felt like Rare was hastily upgrading for the new and the game looked and felt quite rough/uneven for it, at least aesthetically. 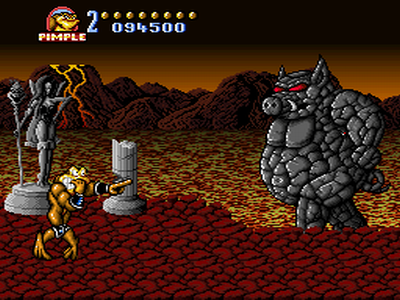 That is not to say that Battletoads SNES was a bad game - far from it. Despite it's unwieldy presentation, there was enough raw graphical flourish to sense that there was some muscle in this new development. And the gameplay itself? The first title was such a beast, that it was actually quite hard to want to pick this game up. NES Battletoads was a masterpiece in many ways, but overall it was like having an abusive relationship. The 16-bit sequel was just a question of "are you ready for more suffering?" These games relished the opportunity to kick you in the teeth again, and again, and again. 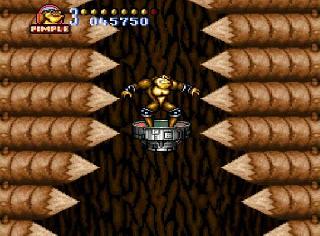 And yet, through it all, there's a special place in my heart for Battletoads and all of it's sequels. These games are wonderfully crafted for a certain pedigree of player. They are unapologetically frustrating, yet they are so big and feature packed (and just plain fun) that it is hard to deny their legacy. In many ways, this SNES game was practically the siren song of the franchise, but it is still a very playable (and enjoyable) game which is deserving of any honest gamer's time.. warts and all (cough, cough).