SEARCH
A minimum of 3 characters are required to be typed in the search bar in order to perform a search.
Production
3 MIN READ
Featured Blog

Retro Game of the Day! Alex Kidd in Miracle World 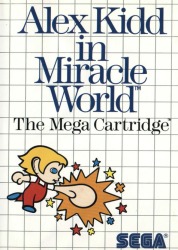 Alex Kidd in Miracle World by Sega for their Master System released in 1986 in Japan (a year later domestically). 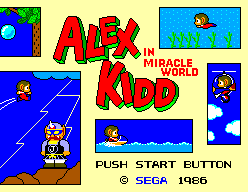 Yes, the (somewhat) famous Alex Kidd, Sega's answer to Mario several years before Sonic the Hedgehog entered the picture. This is where it all began, as the underdog challenged Nintendo's dominance. Most folks who were there still swear by Alex Kidd's initial outing, claiming it is vastly superior to Nintendo's mainstay Super Mario Bros. Let's crack open this can of works and get right to it!

Right off the bat, Alex Kidd's presentation took Mario's first adventure to task. The SMS had a beefier engine, and therefore the dull, drab aesthetic of the older Mario game contrasted with Alex Kidd's sharper, much-more-colorful Miracle World. The Master System just looked and sounded better right out of the box, that much was apparent. Unfortunately for Sega, the designs of everything (characters, elements, even the music) couldn't hold a candle to what was going on in the Mushroom Kingdom. Even though Alex "had more power," everything in Mario's game just looked much more appealing, even if it didn't pop as much. 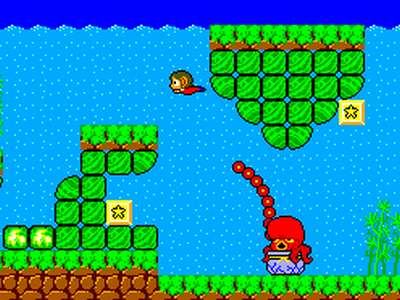 The second strike here was the control setup. Mario's designers nailed it - "B" for run/attack, "A" for jump. For whatever reason, this order was flipped in Alex, and to the uninitiated it just feels.. wrong. Yes, you can get used to the switch, but why should you have to, especially so many years after this convention has been established and followed-through? I have seen some emulators/romhacks which auto-flip the controls for this game, to make it "feel correct." A lesser offense is that to access the inventory screen, one must hit the "pause" button on the physical control unit itself. There were no Select & Start buttons on the 8-Bit Sega control pads (an issue echoed somewhat in the original Japanese Nintendo console's design, to a lesser degree - the 2P controller has no Select & Start buttons either, and both controllers are hardwired into the unit). 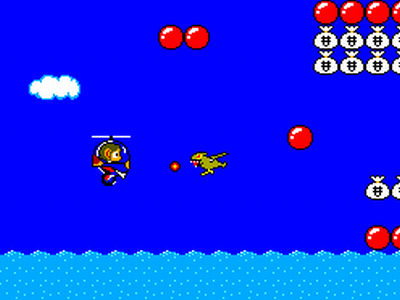 Enough of the mudslinging - this is just the beginning of the reasons why Alex was never as popular as Mario. What did this game have, and why is it still held in such reverence all these years later? The truth is, the game is quite a departure from Mario in many ways. There is vertical and horizontally scrolling action, there are different vehicles (motorcycle and prop-copter, both very cool), there are stores with a multitude of power-ups you can buy for cash, and there are of course very different worlds for you to traverse. Each level is laid out with interesting and challenging design as well, and the whole game just feels happy and sunny. Miracle World felt like a great place to get lost in. 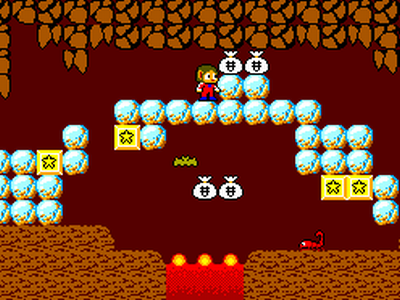 The designers obviously were going for novelty here, and the game played very differently than any Mario game. Instead of standard boss-fights, there were rock-paper-scissors matches (love them or hate them - and no one loved them!) Alex Kidd was a rich, diverse, and happening game which unfortunately lacked a lot of the cross-cultural appeal enjoyed by Mario, but many old-school Master System fans will still swear by it and proclaim their love for it to this day. Alex Kidd still holds up as a very fun example of an early action-adventure title. It's not without its warts, but it deserves to be remembered as one of Sega's strongest console efforts from the early days.

We are attempting to reach for the stars with Reddit! Help us out and "vote up" our cause as we promote our iPhone game '180' (it's going FREE temporarily, shortly!) Support great games and the people who love to make them, register on Reddit and hit that up-arrow!