So, last Thursday evening was the Pandemic Holiday party at the Natural History Museum in LA. Like so many other hangers-on in the gaming industry, I crashed it once again (actually I legitamitely got my name on the guest list this time, which was not too hard to do as they'd opened the party up to the industry at large.. to a point, anyway). Exhausted from an already wild night the preceding Tuesday, I wentured out into the chill of the evening and dragged myself out to enjoy some free drinks and catch up with my ol' pals. I have to say, the night started off kind of rough but a few drinks in (and a few hours to dilute the crowd, some) and my mood lightened considerably - it was a fun time! Not quite the "blast" their last party (that I'd attended anyway, in 2005) was - still it was very satisfying and I was sad it wrapped up so quickly. Here's some random bald guy dancing while I am merrily stomping away in the background: 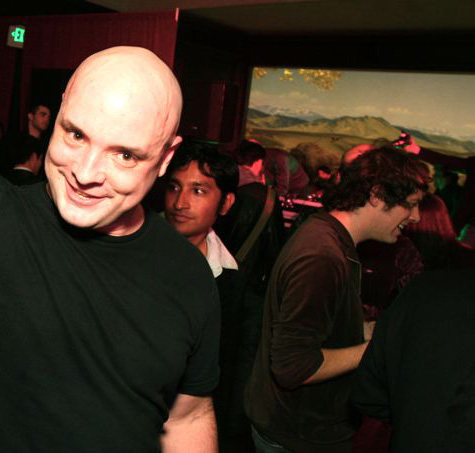 (too bad I didn't get more appropriate pictures - what'd'ya want)

Our own Xmas party looms this Wednesday night, I suspect it will not be quite so ridiculous.. but that's fine (I have partied a bit lately, I can take a breather).

This brings me to today's topic, camraderie in the games industry. I suspect I have written about it before here, if not certainly elsewhere - yes, though there is (of course) much competition between companies in the game industry, and I guess between job applicants, it's generally a very friendly place. Especially on my end (artists and designers), we typically seem to get along quite well with one another, and respect one another's positions. Sure, there's times when you might wanna wring a particular co-worker's neck (we're only human, right?) but generally I get the sense that in many studios there's a strong notion of team and togetherness, overall - we are working together on this production, and the majority of us strive to put our best efforts (and sometimes, our latest nights) to task in order to make one another proud - to keep up our ends and match the work of those toiling alongside us.

Likewise, when we pick up a competing studio's game, we look at it as something deserving of respect (when that is the case) - as opposed to just "we must crush them, all comers, for all that they are worth.. we will hear the lamentations of their women," and so forth. Generally, game developers are honestly the biggest game-fan geeks you're likely to meet, I would say. And I would say this is the case even in the situation of a competing title in the same genre, usually. The bosses may not be so likely to second that, but as far as we grunts go --grunt--. At any rate we can pick up a title and appreciate it from a particular point of view, as far as what kind of work has gone into it, the little bells and whistles, etc.
Get daily news, dev blogs, and stories from Game Developer straight to your inbox
Subscribe