SEARCH
A minimum of 3 characters are required to be typed in the search bar in order to perform a search.
Production
11 MIN READ
Featured Blog

A full debrief on the success of the preorder bundle for Overgrowth and Natural Selection 2.
David Rosen
Blogger
January 28, 2010

In addition to John dyeing his beard pink, we promised that we would write a postmortem report on our recent "Organic Indie Preorder Pack" promotion. Here it is!To recap, a couple of weeks ago, we ran a promotion with fellow San Francisco developer, Unknown Worlds, bundling preorders of our two upcoming games together, Overgrowth and Natural Selection 2, for $39.95.

The promotion was notable because 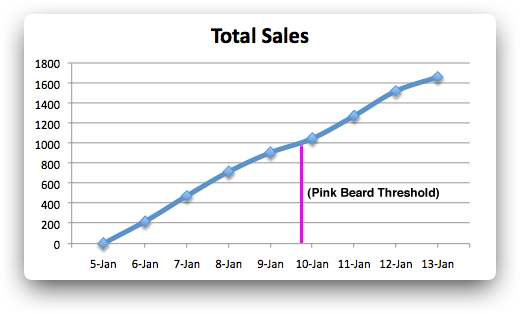 There is a lot to cover here, so let's begin with the relative magnitude of the sale.Originally, we had 1100 preorders of Overgrowth, since announcing preorders a little over a year ago. In one week, we sold 1658 packs. That represents almost exactly one year's worth of preorder revenue, in a single week.

We expected the promotion would probably have an explosion when it was first announced but would then quickly taper off. On the contrary, sales were surprisingly steady throughout the entire week. The largest sales burst was, predictably, in the last hours of the promotion (we had a neat countdown timer). In future promotions, it might be a good idea to somehow extend the promotion by an hour or so, because in the last hour, we were doing about one sale per minute. We had 3 sales in the last 30 seconds alone. There clearly were many people who were enticed by last minute chatter (literally). Since our data shows almost no deceleration, I have to wonder what would have happened if we extended it for a week.

We expected that the promotion would cannibalize regular preorders for Overgrowth and Natural Selection 2. On the contrary, while the Organic Indie Preorder Pack was live, both Wolfire and Unknown Worlds noticed a significant increase in regular preorders.To be clear -- there was no reason to preorder Natural Selection 2 Special Edition during the promotion, since you could have gotten Overgrowth "for free" by ordering the pack. Certainly some people ordered it by accident, and we obviously refunded them. However, even after accounting for that, preorders were significantly up.I attribute this to two reasons:

We experienced this last year as well when we offered Lugaru for free temporarily. Even though it was free in the MacHeist Giving Tree promotion, regular Lugaru sales increased because people just wanted to support us. 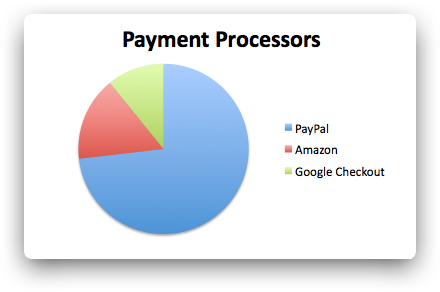 The breakdown of payment services.

We like to support as many different payment providers as we can. These are the services responsible for actually accepting payments (via credit card, bank account, etc.) We use them directly because they only charge pennies more than the raw credit card merchant fees (2.9% + 30 cents) while middle-man processing services will charge quite a high percentage for simply accepting a credit card payment.

Most people only support PayPal, but this graph shows that having Amazon and Google Checkout was appreciated by over 25% of our customers. I can't tell you how much this increased the bottom line, because people who used Amazon and Google may also have been willing to use PayPal had the other services been absent. The data might also make PayPal look much more popular than it really is because we had PayPal as the default option, and surely some people simply didn't care to change it.

Like most sites, we have Google Analytics installed so we can see who is linking to us and so on. One really interesting metric we can track is the number of people who purchased the Preorder Pack sorted by their referral source. In other words, how many sales of the pack did a given site generate by linking to us?

I don't really want to say how many sales one blog drove versus another blog, since that may be kind of personal to the blog owners and not terribly useful to anyone (you don't have any legitimate control over what blog will cover you). However, one fascinating point is the social media sites.

We have long since been advocating social media, and this really drives the point home:

Facebook [420 shares] and Twitter [459 retweets] along with ModDB, Reddit, and YouTube generated maybe one third of our sales. Each source dwarfed even the largest gaming news sites that posted about us, which then dwarfed the long tail of small forums and personal blogs that mentioned the pack.

Granted, they all work together. For instance, someone might hear about the pack from TIGSource and then share it on Facebook, which would count as a Facebook referral. Google can't provide this kind of data [yet].

It is hard to quantify, but we were hoping that people who received a free copy of the pack (by previously preordering Overgrowth or Natural Selection 2) would tell their friends, and I suspect that is where many of the Facebook shares and tweets came from.

Also of note, right in the middle of the promotion, one of our daily blog posts blew up. I wish we could take credit and say we masterminded a super viral blog post to spread around the internet and land people on the site, but sadly, it was pretty random. We did, however, put extra effort into writing quality blog posts in order to impress the new Natural Selection 2 community (it is hard to compete with the awesome Unknown Worlds team!) Little did we know that David's OpenGL vs. DirectX piece would turn into the #1 Digg article of the day.

I want to write a blog post about that, because that was quite an event alone, however, I will summarize it here.

David posted his OpenGL blog post in the evening, as usual. When I went to bed, I noticed that it was receiving some attention on Reddit (not that unusual -- RSS readers are on the ball!) When I woke up, it was the #1 story on at least three sub-reddits and had even hit the Digg front page. Long story short, we received about 200,000 visits from Digg, Slashdot, Reddit, Hacker News, StumbleUpon and many other sites.

Untargeted, burst traffic like this is famous for its short attention span -- from what I've read, they will typically skim the article in question and then bounce. However, when looking at the analytics for this postmortem, I was surprised to find that I can attribute roughly 100 sales of the pack directly to Digg, Slashdot, Hacker News, and other links to David's OpenGL article. Granted 100 is less than half of one percent of 200,000, but it is quite a large number as far as I am concerned, especially because the pack was not even part of the article in question.

Luckily we use Google App Engine as a host. This kind of traffic means nothing to App Engine (although Wolfire finally exceeded the free quota and Google did bill us 11 cents for the traffic).

Requests per second to the blog post as it moved around the web.
What's more important than what happened, is what didn't happen. App Engine didn't falter, and the site stayed as responsive as ever. One of my pet peeves is when sites go down during their big moment. Imagine if the Preorder Pack page died because an unrelated OpenGL manifesto was passed around the internet. That would be devastating and this postmortem would likely read as a tragedy not a triumph.

Thanks for the Support!

Finally, I'd just like to say thanks. This was a really important promotion and is a small taste of "you know, this just might actually work" which is really inspiring when you've been working non-stop on a project for 1.5 years. Morale is high, and we are already making plans on how we can use this new influx of cash to help with development (in addition to upgrading our Subway sandwiches to have extra cheese from time to time). More on this later!

I'd also like to thank everyone in the IRC channel and forums for helping all of the newcomers with Overgrowth and bearing much of the increased support burden. Because of the community help, John was able to manage our live chat service and maintain an empty inbox for almost all of the promotion! We got a lot of compliments on our fast support even though we are a miniscule indie game company.

Here's some random trivia that I'd like to mention, but might not be worth its own subsection.

The Preorder Pack was conceived at a monthly San Francisco game developer meetup with Unknown Worlds called the Post Mortem. In the span of about 15 minutes, we decided "hey, it would be awesome to bundle our games together!" We took longer to flesh out the details at another meetup, but it was a breeze since we are independent. The site took maybe 4 days of serious work to create. Within a couple of days of the end of the promotion, we gave Unknown Worlds a check for their half plus official reports from PayPal, Amazon, and Google. This doesn't sound too remarkable, but we sometimes have to wait several months for payments on Lugaru from professional distributors, and have to take their word for it that the amount is right.

Since it was such a low hanging fruit, I added a gift option to the Preorder Pack. About 5% of the packs were bought as gifts. It would be interesting to have run it through the holiday season and see how much this number would change.

We knew we could count on awesome sites like these to cover the pack. However, one idea we had to attract the giant gaming sites was to give them several gift copies of the pack so they could do a reader contest [we gave these to all sites]. Sadly, we still have yet to get a mention by the larger sites.

We decided to make the YouTube video announcing the Preorder Pack public about an hour before the planned launch so that blogs would have time to embed it. Within a few minutes of making the video public, some savvy YouTube subscribers purchased the pack.

We originally thought that 1000 sales of the pack was a pipe dream, hence the pink beard "incentive". John manned up and delivered the promised video, though.

Preorderers seemed really excited to discover that their old purchase had spontaneously entitled them to an extra game. Special perks like this for preorders seem like a great way to combat the negative trend of "if I wait long enough, I can find the game for $0.25 in Walmart's bargain bin".

John said it in his talk at GDC Austin and you'll hear him say it again at the main GDC in San Francisco next month: open development is key, especially when you are small. If we had been in stealth mode for 1.5 years, we simply would not have had the awesome community to have made this possible. The Wolfire experiment is far from over, but hopefully this humble promotion will lend a little more weight to John's upcoming GDC talk.