Tanya X. Short is the Captain of Kitfox Games, the independent Canadian studio behind Moon Hunters, Shrouded Isle, and the upcoming Boyfriend Dungeon.Tanya gave a live version of this article at the Game Developer's Conference 2018, as part of the Independent Summit.

It seems like most indies that you hear of err on the side of waiting too long to release their games. They extend their estimated launch by years and years, making sure everything is perfect. And if that's right for you, that's fine. If it works, it works! But some of us (including me) have the opposite problem -- we release our games too early, when they're still molten and unready and unfinished.

Luckily, now that I've not only been through it and learned from it, but also had time to heal and recover, I can share the warning signs with you. The Moon Hunters launch was 100% my call, and I blew it, so read on to find out if you might be in danger of making a similar mistake. Don't do it the way I did. Mess it up your own way.

In early 2016, we were getting ready to ship our biggest game yet: Moon Hunters. We'd worked on it for over 2 years, which was already twice as long as our first game (Shattered Planet). 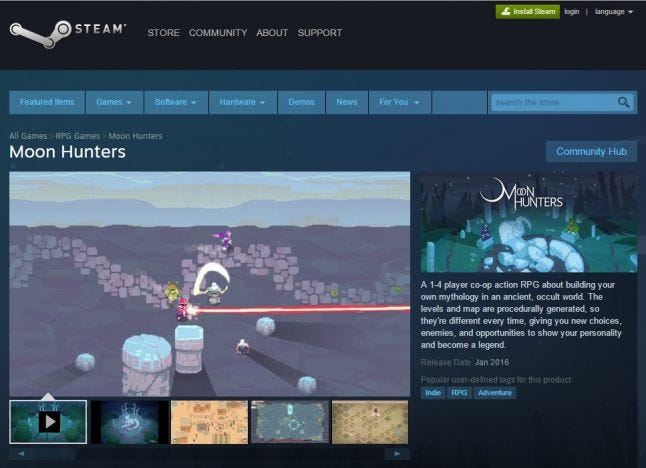 We'd done a lot of promotion through the years, in Montreal and abroad. We demo'd so many different versions of the game it's amusing to see the different iterations of the interface show up in old photos -- oh look, there's spring 2015, etc. 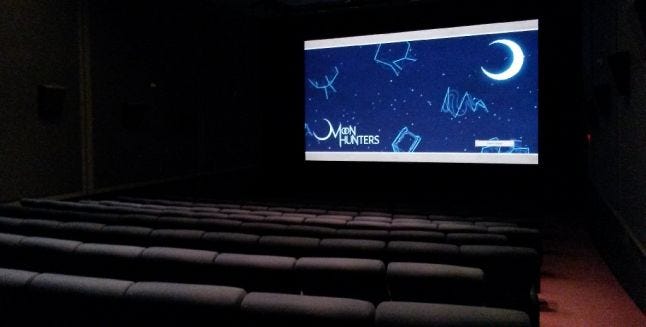 We published to the front page of various sites, including the PlayStation blog, multiple times. We showed at several PAXes in the Indie Megabooth, to packed crowds. We had articles from most major publications, and we had a Kickstarter that exceeded our expectations, blowing past our $45,000 goal up towards almost 400%. I'm still proud and grateful that we managed to have 6,000 backers.

Even more exciting, the game seemed to gain word of mouth pretty organically. The Kickstarter didn't have a mid-campaign slump, and we won awards at various events almost continuously. Everyone told me we had a hit on our hands -- for sure, we would be financially comfortable after the game came out. We had literally every reason to feel extremely good about what we'd built. That's what they said.

This was actually a bit later in the timeline, at the Canadian Video Game Awards, but just imagine this feeling of pre-launch cockiness and certainty.

In fact, we had built up so much visibility, that PBS Vermont sent a film crew around the time of our launch, to capture that fateful moment, and also to film our launch party. Lucky us.

Now, I'm a fiscally conservative studio head. We had stored up survival money, and I had lined up a profitable work-for-hire contract with a publisher we could start on afterwards, just in case things went completely awry. Financially, we could have waited a month or two to launch, but we didn't. We pressed the button just a bit too early. 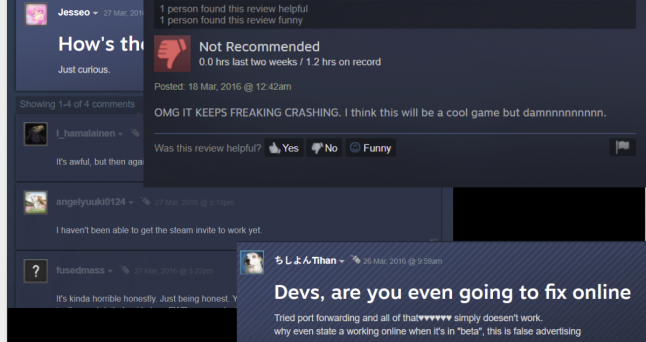 And so the launch was... bad. Our fans were disappointed. There were crashes. The online multiplayer mode was in a 'beta' form, which was infuriating to most players. And there were core systems that were just unsatisfying and weird, which needed revisions.

Some mainstream audiences (like IGN commenters below) had already braced themselves to hate the game, which is theoretically easy to dismiss -- if someone doesn't like pixel art, they're not going to like Moon Hunters, sure. But I hate the idea that I added fuel to someone's anti-indie fire. 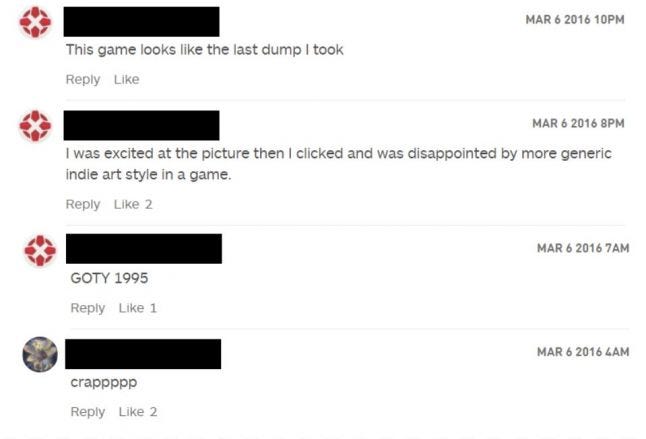 So this is what a launch week looks like in a healthy game launch, like The Shrouded Isle -- those day 1 customers create word-of-mouth and positive reviews that spread to day 2 and day 3 etc.

Meanwhile, this is what Moon Hunters' game launch looked like (not healthy). All of our fans piled in on day 1, and then generated almost no word-of-mouth in days following. Our hype hit the brick wall of reality.

Now, theoretically, if that day 1 peak was very high, we could say that it was a perfectly healthy launch because we saturated our niche. But I can assure you that the peak was not that high.

Anyway, it's true that launch days don't determine everything about your sales, but it did influence our coverage and apparent success for the next 6-12 months. If we'd waited to launch until the game was ready, surely the Metacritic and user reviews would have been higher, and all of that would have led to higher spikes down the road, which all adds up to hundreds of thousands of lost dollars.

Thanks, PBS. You can watch the full episode of "Qulture" here. They were actually very kind.

And PBS was there to capture it. Lucky us. But they were just telling the truth -- we released an unready game and got what we deserved. Despite our launch day being better than many indies, we could tell the coming year wasn't going to be quite enough to sustain our 4-person studio.

I also immediately found myself massively demotivated. I didn't really care about the money. I had prepared for bad sales, and even lined up a gig for just after launch to sustain us, for this exact possibility. But I hadn't quite prepared my heart for disappointing people, or making what could be called a "bad game". I was heartbroken. I felt like I'd wasted years of my life, making something that wasn't worth the time or energy from me or my teammates. It made me feel like I had peaked, and that I was old, and tired.

In hindsight (which has no bias at all, ahem), we should have known better. In fact, one prominent YouTuber went so far as to write me a heartfelt letter during the beta, pleading with me to delay the launch. But I ignored that, as his demands and wishes seemed unreasonable. I also ignored other signals, like this sincere Kickstarter backer:

But, as obvious as it seems now, it wasn't obvious then. I thought I was being smart. So why did I do it? If I really think back to that moment, there's a few factors that led to me making this mistake. So if any of this sounds familiar to you, take note. Your future self might not want you to do what you're about to do.

(Again, be warned that a moment of self-awareness can go a long way. I am a person that is particularly impatient and efficiency-/deadline-oriented. But if you're the opposite kind of indie developer/project lead, who tends to be particularly whimsical and quality-/perfection-oriented, you probably shouldn't read this stuff, as it might be reversed from the advice that applies to you. Take what you need; pass on the rest.)

Reasons why we launched too early:

Luckily, we did recover. My mistake wasn't fatal. This isn't a post-mortem of Kitfox. Don't cry.

In fact, launch day wasn't nearly as strong for sales as almost a year later, when we were in a Valentine's Day couch co-op Steam bundle sale (thanks Jamie Tucker! You're the best!). As a result, Moon Hunters made more money in 2017 than it did in its launch year, 2016. And the review score rose similarly (correlation and not causation, folks).

I do have excellent luck, and I have had my whole life, so I try to stay grateful for that. But we also worked hard to try and recover, so... for what that's worth, here's what we did: 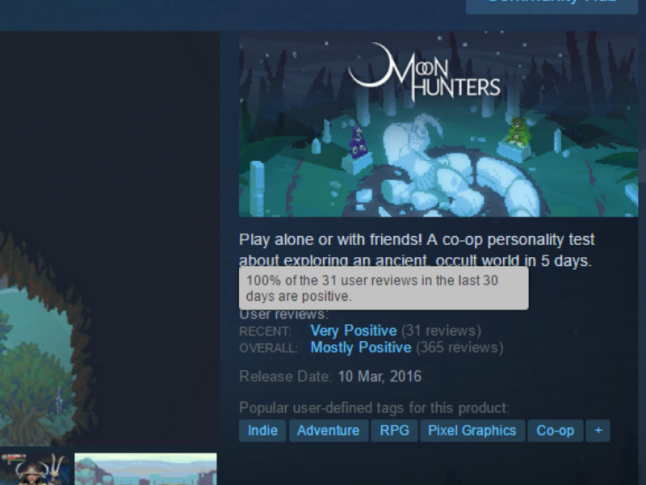 Aside: Failure is Process

This last point was important to changing my worldview. I'm sure someone on the internet didn't read this article very well and just glossed over the title, thinking, "Ah yes another entry in the indiepocalypse oh well" -- WRONG. That is not what I'm saying. Let me elaborate.

Every time I told a more experienced indie about my disappointment, they would nod sagely and tell me a horror story of epic proportions, which I'd never heard of.

Because we don't tend to talk about failure and mistakes.

We only talk about success. There are very real, practical reasons for this. To any investors listening in, ahem, of course Moon Hunters was a total success. Absolutely. Everything we do is always totally successful. We have so much money and happiness over here, we don't really need you, but feel free to add your contributions to the pile. Uh huh.

The consequence of treating failure like a secret shame isn't just survivorship bias. We all feel uniquely humiliated when we make a mistake and disappoint ourselves, and it shouldn't be that way. If you're failing, you're not alone. Everyone successful has also failed somehow, along the way. It's part of the journey. The way you'll learn from it and grow from it will depend on you.

Launch day was only the beginning.

When we started, Kitfox had one clear goal: Survive.

Which is fine, whether you're an indie dev or battle royale star, but you need priorities beyond that... and since we hadn't really said any, it defaulted to my personal nature (Efficiency). When in doubt, if survival wasn't being threatened, I erred on the side of being more Efficient.

So in our current and future projects, including Boyfriend Dungeon, we're instead prioritizing Quality. Survival is still important, but really, Efficiency is a nice-to-have. At the end of the day, making the best game you can is the point of it all, right?

If you're like me and prone to just rushing ahead, take a breath. Bring in fresh eyes. Double-check your assumptions.

Keep learning from your mistakes. I know I will. I hope we both keep making better and better games.