SEARCH
A minimum of 3 characters are required to be typed in the search bar in order to perform a search.
Production
9 MIN READ
Blogs

An artillery shooter is a computer game based on controlling the trajectory and the range of an artillery shell. The rest is variable or can be omitted altogether. The targets and cannons can move around, the artillery shells can cackle and devilishly roll their eyes, the wind can blow in all directions at the same time. Today only the laziest people and my father-in-law, who prefers playing cards for stakes, are not aware of the best-known game series of this kind called Worms. That is why I want to review the games which, lingering in its shadow, have, however, left a considerable mark in the history of this genre.

The proud Teutons are unquestionably skilled in artillery but this is not the reason why Ballerburg has become a cult game for the Atari generation. It’s just a lucky coincidence, as at the time when this game was released, its developer has been a student at a school specialized in computer science, so he must have seen cannon balls only in museums. Two castles divided by a mountain, cannon powder and cannon balls, the wind and two kings issuing important orders which do not make any sense. The goal is to kill your opponent’s king. You can play in hotseat mode or against the computer. A little later a table to keep the results of the duels was added. 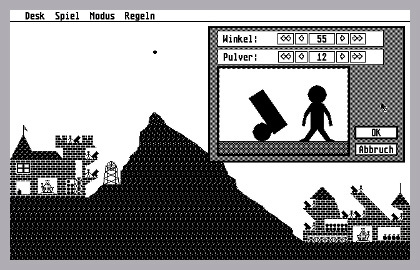 Ballerburg was considered a difficult game for its genre and time. The player could choose between different castles with different firing powers and fortifications. As the wind kept changing all the time (indicated by the weather vane) the player had to change the firing angle and the amount of powder. To keep the powder in stock, the player had to refill the treasury by imposing new taxes and building new oil rigs (max. 5). The oil rigs were expensive but they could replenish the royal treasury pretty quickly. The opponent’s oil rigs, treasury and powder magazines were your obvious tactical targets, so there was no reason to keep them intact.

The game was freely distributable but was marketed as donationware: the developer asked 20 Deutschmarks for the source code. Kruse had received 159 such donations over 12 years. In November 2001, Ascaron — one of the oldest and most successful German game developing companies, released a 3D version of Ballerburg for PC and PlayStation without referring to the original or the developer of the prior game. The lawyers of the company notified Eckhard that he did not have any rights to insist on and later sent him two free copies of the game as a consolation. The game was published in Russia in 2003 by the company 1C.

The godly king can overthrow a criminal bloodsucking tyrant here:

Scorched Earth. I used to know your mom

Judged by its solid reputation in the gaming industry, Scorched Earth has played the same role for artillery shooters as Mario Brothers did for the plumbing services arcade games, i.e. it has set the standard. SE has become the first widely known game of its genre.

Of course, luck played its role too, as that was the time when computers were rapidly developing, sound and graphics cards were improving, big money and professionals started coming into this field while bedroom coding was in decline. Nevertheless, the slogan «The Mother of All Games» made after the famous quote by Saddam Hussein, still looked like an arrogant self-confidence.

Well, anyway, let it be the Mother. The game truly had a lot of strong points. In short, Scorched Earth followed the Golden Rule of all games: «easy to play but difficult to master».

One of the curious things worth mentioning is a modem icon in ver. 1.1, which pointed to a possibility of network battles in the future. It never got implemented, so the icon disappeared in ver. 1.2 and never came back. The FAQ section of the official website responds to the question in good fun: no can do, no can do “Modem support is not yet available”. Also ver.1.1 comes with quotes from such movies as Die Hard, Surf Nazis Must Die and My Science Project. Be careful, these quotes are used for dirty cursing.

You can fire the oldies here:

Scorched3D. The same but different

Scorched3D deserves a separate mentioning, for it started as a project for generating 3D landscapes and then transformed into a standalone game created with all love and respect to its 2D original. Having once feverously played Scorched Earth for 8 hours, Gavin Camp, its developer, decided that 3D landscapes would make the game better-looking and add more different tactical opportunities. He had to write his own game engine as the existing ones did not support destructible landscapes. This approach was absolutely normal for a man from Glasgow as only plague, King Edward I and lack of whiskey could have stopped him given the fact that the city (may Saint Mungo bless it) has not seen those misfortunes for a long time.

The first build was released in 2001, the latest being 44th. The first version was developed for Windows but nowadays the game runs on different platforms, it supports network multiplayer mode, keeps statistics and has two game mode options: turn-based and real-time. A shooting range option is also available for training targeting skills and testing all the available weapons. A number of game servers are also available, including one for beginners, but unfortunately they are not too densely populated and it might take hours for the opponents to show up.

The game is completely free and is distributed under a GNU GPL license. A good many modes for the game are around, the most popular being Apocalypse Mod which multiplies the game’s weapons amount and adds new maps, locations and textures. Currently it downloads with the game and shows up in its options. Back in 2010, the French developers from Eurocenter were swearing to grands dieux to release a paid-for version for iPhone, but they got lost in races, poker and French Tarot.

The house of Gavin who Scorched3D built:

A game named Molez was released in Finland in 1997. Mean moles, armed to the teeth, were digging underground galleries splashing around intestines of their congeners. Despite some popularity, the project effectively died in 2000 but managed to give birth to a viable clone Liero with a dynamic gameplay resembling no time to ponder, hit it! an arcade.

The classical version of the game offered only a two-player mode: you select 5 weapons out of 40 available and engage in a battle. Each player has a rope to move around and to hook the opponent with. First aid kits and bonuses of changing the weapons which the player can fine-tune before starting the game are scattered around. The game profile offers a possibility to change the control keys and the amount of health. Bullets are endless, no need to save them. Gravitation is available, network playing is not.

The landscape is generated randomly and is destructible, with a rare exception of stones. If you get bored, the game comes with a map creation file to generate your battlefield to you own taste.

The last classic version of Liero was released in 1999. Its source code got lost due to a hard disk failure and the game has not seen any fresh releases ever since. In the first half of the 2000s, the game started sinking under in an embrace with Windows 98 while listening to the farewell horn from the leaving ship of the modern age. The OpenLiero project saved the game, managing to clone its classic version for current OS’s, to clean up the bugs, to fine-tune it and to add a little bit here and a little bit there. But network gaming is still not available. The game is meant for those grim folks who like crowding around some old ’puter brushing away a nostalgic teardrop.

As for those who go to extremes to avoid physical contact with their own kin and preferring spiritual unity, they got OpenLieroX, which is the classical game rewritten on a new engine. It offers a modern user interface, a map editor, network gameplay and the old classical bloody thrashing.

You can plunge into the world of chthonic monsters here:

Seems it’s time to round up right here with the first part of my story.

We will be grateful for notes and comments. It will make us feel good if you discover something interesting for you among these games. Even if it entertains you only for a short while.