I found a niche how I can maybe be helpful to the Gamasutra Community: I will report and comment about the video games business in Germany. I was born there and live in that country for around 40 years. I'm neither working nor associated with any company.
Adam Beckett
Blogger
July 03, 2009

(Disclaimer: I am not a professional journalist/writer nor related to the video game industry)

1. Re-Structuring of the German ESRB 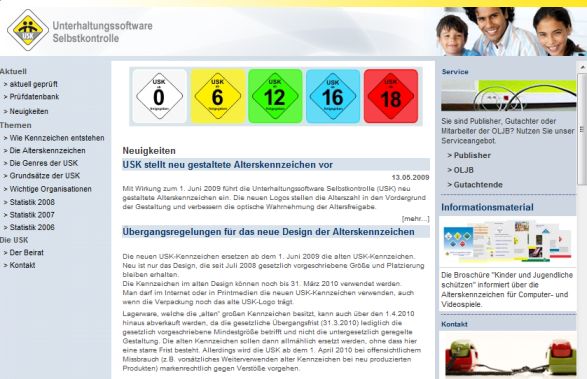 The German Website 'MakingGames' reported on the new structuring of the German version of ESRB. Before, it was organized in a rather obscure, bizarre fashion - combining political and civil appointees, including religious groups, without any transparency who was part of it or how or why.

Now it is an Association held by the German Trade Association of Interactive Entertainment Software  and the more German Dev focused Association Bundesverband der Entwickler von Computerspielen G.A.M.E. e.V. (- they have no English-Language Website: tells you something), the two biggest Industry Associations representing the interests of all major video game companies doing buisness in Germany.

There's a short press statement in english (between the german lingo) on their website.

2. Statistic "How should so-called 'Killer Games' be dealt with?"

In Germany they call First Person Shooters 'Killer Games'. It is a term crafted by Conservative politicians to quickly evoke emotions from their voters. Today, every video game that has some sort of 'shooting' or 'killing' in it may fall under this newspeak-lingo polit-marketing term. 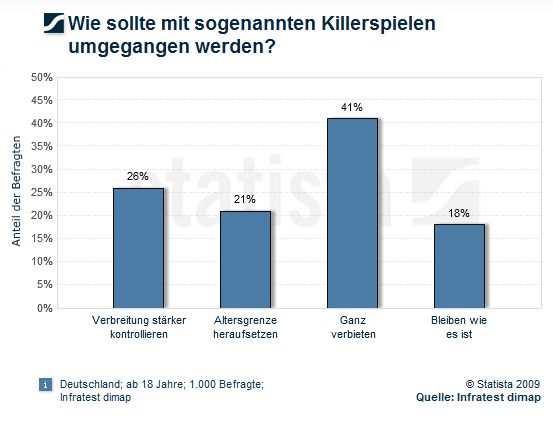 - 26% Distribution/Sales should be controlled better

- 21% Age Restriction should be bumped up

- 18% Everything should stay the same

The poll was taken by Infratest dimap a well respected pollster, who does i.e. political polls.

In the first 5 months of 2009 overall sales in Germany's retail business dropped 2.2-2.8% The Retail Association predicts minus 2.0% sales for 2009. This is not about videogames, but commerce in general.

This is the official Government Website about all things statistical: Demographic, Commerce, etc...