for crying out loud 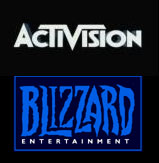 Yeah, well, isn't this technically one of the Four Signs of the Apocalypse? Wait, I forgot.. the world actually ended sometime in the mid-eighties. I think when Knight Rider got signed for a fourth season or something. Most would say it was the seventies, but in all honesty I do believe it coasting on fumes for a good several years. Good for them!

No, but really, this is madness. Well, not really. This is just.. self-fulfillment of prophecies, really. The entire industry is slowly turning into a High School Statistics class equation, from here on out. Put all the big (and mid-) leaguers into an array and squish them through the sausage machine. If P then Q, if not P then not Q. If A and B buy C then D will merge with E while F gets extremely white-trash rich. And that, my friends, is why I work in the videogame industry, as well. Usually when I wanna write a reactionary post to something as bamboozling as this, I get all rambly and postulate-y. But at this point I am getting tired, as the fantastic becomes normal - I will wait and read about it on the forums along with everybody else.

Though I must admit, it does hit rather close to home in some ways. Consider this - I used to work at Swingin' Ape, when it was a tiny dev (@15 people?) which was down-the-road acquired by Blizzard and turned into Blizzard Console (Starcraft Ghost, version 2.0.. roughly). After my departure from SA (a brief tenure, mind-you) I got an art test from Tha Blizz while WOW was in production - they sent me a Tree to make ("oh whee, here's a tree"). I had just departed from OC, having sworn never to set foot on it's wretched soil again, and as I'd just settled on trying for work with either Treyarch or Left Field, the Blizzard tree was left out.. in the cold (you see what I did there?) A couple years down the road, I had left Left (working for Activision, Actually) and another year later I was makin' skatey games at Neversoft. Gun was wrapping up, and Tony Hawk 7 was in full swing - Neversoft's glory days as "Activision's Golden Dev" were pretty done, but they were still pretty popular as those things go. A couple of years at NS and then outta there too, and six months hence - guess what? I am working at Obsidian in OC, just a couple miles up the street from Nobody Beats the Blizz (clearly.) In fact my girlfriend, last year, lived on the same camps in which they were stationed (I heard they just moved this weekend). Point being, I work in OC, which is videogame-wise steeped in Blizzard's shadow. Everybody here plays that game. Dudes here have worked there, some have left this place for that one. Why haven't I tried to get back there? Oh. I have my reasons. More than ever, I resist the great conglomeration, but I know that my days, too, are numbered, the way things are going. Not necessarily working at the newly-crowned AB, but at some place which'll get snapped up again by some big-ass megacorporation. Anyway, best not to think about how much money my alternate-universe doppelganger is belly-flopping into, because it's no all about the money anyway (though stability and respect, those are other issues altogether). I guess many people are excited about these things, well.. so many are nervous and anxious about what it all means. Me, I get a chilly feeling "it is all too soon, it goes too fast.." I try to keep tabs on as much as I can, in my tiny speck-like state in this all - as ever, I wonder where I will end up and if when the time comes (if I've not fallen overboard) whether I will be happy or unhappy to get sucked up by whatever overbloated monolith. Yeah don't forget, I have had checks signed by Activision before. Hell even Vivendi, a couple of times.. right now, technically, it's Sega.. but it's always a different degree, what is all means.
Get daily news, dev blogs, and stories from Game Developer straight to your inbox
Subscribe