SEARCH
A minimum of 3 characters are required to be typed in the search bar in order to perform a search.
Production
9 min read
article

Bombball is an abstract sports game that I released on the OUYA last week, on 6/26, one day after the OUYA launched. The game was inspired by Hokra and the indie eSports panel at last year’s IndieCade, and it was first created for Kill Screen’s 10-day CREATE game jam, for which it won a minor award.

First, some juicy sales metrics! After six days of being featured, Bombball has been downloaded about 8000 times and has actually sold 46 full copies (at $4.99 and $2.99 after a recent discount). It’s still early, but I feel that this was a weak launch, and I figured that now was a good time to do some public reflection on the project. I’ll start with the good:

During the game jam that spawned Bombball, I knew there were a few things I wanted to focus on: a high skill ceiling, spectator-friendliness, good local multiplayer, and simple mechanics. The version that won the game jam delivered on these goals pretty solidly, but the game was still a little awkward in places. It wasn’t until I demoed the game at a San Diego indie meetup and got feedback from other designers that the game finally got whittled down to its current form.

It’s a small game with simple mechanics, but I’m very proud of how it plays. I achieved my design goals, and although it hasn’t reached a large audience, the people who have played it seem to enjoy it too. My favorite bit of affirmation: 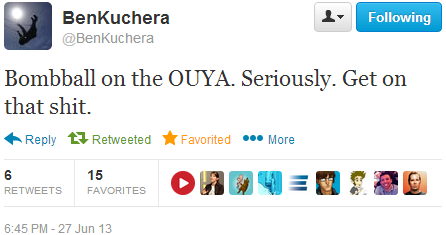 Bombball started out with my usual ugly prototype art. When the time came to finish the game jam version, I gave myself some constraints (highly saturated colors, no black) and made the best programmer art that I could, but it still looked very amateurish to my eyes.

The art was completely transformed after I got put in touch with Will Stallwood, the genius designer from Cipher Prime, who generously agreed to help out with the art style. He completely redesigned the visuals, introducing a crazy awesome shifting-prism look. While we weren’t able to bring it up to Will’s own high standard in time for release, I’m still immensely pleased with the gorgeous new graphics.

Here’s a look at how the game evolved from prototype to game jam version to released product (and check the trailer to see it in motion): 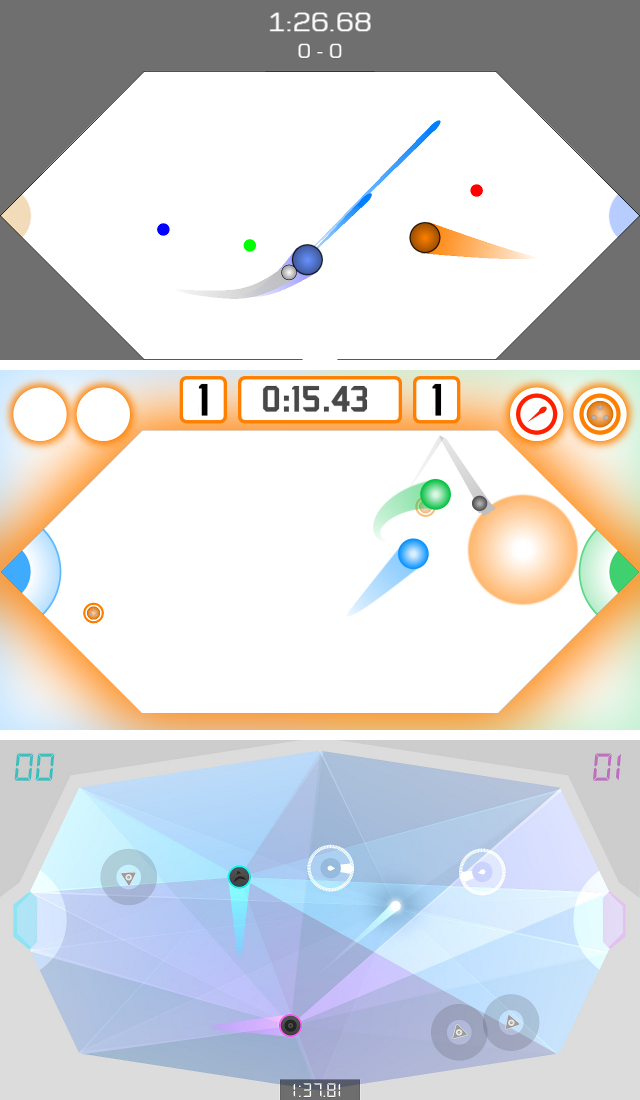 While trawling for some Creative Commons audio during the game jam, I was reminded of the incredible music in Brendon Chung’s Atom Zombie Smasher, and I decided to go for a similar surf-rock-inspired soundtrack. I was lucky enough to find enough CC-licensed audio for the game jam version, but I was initially at a loss when I needed to expand the track list.

Royalty-free licensed music saved me. I found a few sites that were selling the sort of music I was looking for, and I bought tracks from a few different sites, but I ultimately found my best stuff on shockwave-sound.com, thanks largely to their excellent search function. A composer named Pierre Gerwig Langer had a collection of polished, professional, energetic surf rock that fit my needs completely. Most of the tracks in the final game come from him, and I’ve heard more than a few people comment that this music is their favorite part of the game.

The CREATE game jam was in January. After winning, I knew that I would want to develop the game further for a release on the OUYA, but I figured it would take me about 1 month, or maybe 3 months at max. I hoped to get the game out before the console started shipping to Kickstarter backers.

Instead, it took nearly 6 months. Some of that was due to my own slowness (see below), but it was also because I waited too long to find an artist. I finally did get a talented artist to agree to work on the game, but then it took until mid-June before he was able to get started in earnest. Then, he got sick soon before launch, and I had to crunch for the last few days alone. In the end, I missed the OUYA’s official launch, though only by one day.

During the time I was waiting to get started on the art, I barely got anything done on my own. I should have been more actively finding ways to improve the game, or working more ambitiously on other major projects, but instead I puttered around on features that I never really expected to include in the game (side note: online multiplayer is very difficult to do with a fast physics-based game). When I finally showed the game off to other indies, I was able to get some good revisions done, but that was an exception to the general pattern of waste. I lost months of time thanks to my own inability to focus or temporarily move on from the game.

I can excuse a dearth of playtesting for the game jam, since there was never much time to do anything except finish the game. But even during the long period of slow development described above, I never played the game with anyone other than a couple of friends and a few indies at a single meetup. The feedback was useful and largely positive, but there wasn’t enough of it to actually make informed decisions, and I still worry that the final version of the game has poorly balanced AI and other issues.

I’m proud of Bombball, but it’s ultimately a game that’s built for local multiplayer with controllers. That’s a limited audience, and a rough bet for any indie. The OUYA seemed like the perfect system for this type of game, but now it's apparent that its audience is smaller than I had hoped for at launch, and from what I can tell, only a small portion of those who download Bombball ever play a multiplayer game with it.

Let me interject here that I love the OUYA team, and I support their ambitions. They’ve been great to me, from early dev support to featuring the game after release. Still, the system didn’t live up to my hopes as a developer. It was a tall order for them from the beginning, but I still find myself a little disappointed.

A few OUYA games released early, got some attention and traction, and were mentioned in most of the reviews of the system. Bombball, in contrast, released silently a day after the system launched, and probably owes most of its downloads to the fact that it got featured. Some of this weak reception can be blamed on the fact that the game doesn’t have an easily marketable high concept; it’s abstract and simple and only interesting when you play it or see it played. It’s not a game that sells itself. It’s just a fun local multiplayer action game, and that niche is also occupied by more prominent games like Towerfall and BombSquad.

This issue also ties back, in large part, to the scheduling problems mentioned above. For a long time, I knew that the game was going to radically transform once the new art came in, but I didn’t have any of that new art to show. I was reticent to market my game to the press or to OUYA owners before I had the sexy new look. When the art was finally ready, I was too busy implementing it to focus on promotion. I didn’t even have a trailer finished until a couple days after release. The game got a couple of nice mentions in the press, but it doesn’t look like it’s going to be one of the more talked-about titles on the OUYA.

Bombball released with 10 free rounds of multiplayer and unlimited singleplayer for the easy and medium levels of AI. This seemed like a good idea since the game is focused on local multiplayer, and I thought that hooked players would quickly want to access the hard AI too. Unfortunately, based on the comments I saw online, most players seemed to focus on singleplayer, and they were satisfied with the easier AIs. I only sold about 35 copies at a $4.99 price point with this scheme, and that’s after fixing an issue in which the option to buy the full game was unnecessarily hard to find. I recently updated the game to put the medium level of AI behind the paywall (which felt bad to do retroactively, but also felt necessary) and simultaneously drop the price to $2.99; whether this will be any more successful remains to be seen, but I’m reluctant to go much further.

As you might gather from above, my belief is that I succeeded in making a great little game, and that most of the problems came from the process of the development and release of the game. At this point, Bombball is “done”, but there are a number of places it could still go. I’ve submitted the game to a few festivals (fingers crossed for IndieCade 2013!), and it sounds like several small, indie-friendly, controller-based platforms might be worth looking at. MOGA, Project Shield, PS Mobile, the new iOS controller API, the rumored Google OUYA-like console, et cetera could all be possible homes for the game, though I’m not sure if any will really work out.

Also, since this is a Unity project, I have a PC/Mac version available. If anyone reading this is interested in playing this game on their computer (hopefully with a controller nearby (and ideally with some friends to play against)), shoot me an email (address found here) and I’ll gladly send a free copy! More than anything else, I want my game to get played.

@E_McNeill
Cross-posted from my blog.