In open world games, level design is the central feature, not the game system. Discover keys issues designers must address when planning their open world.
Pascal Luban
Blogger
May 07, 2020 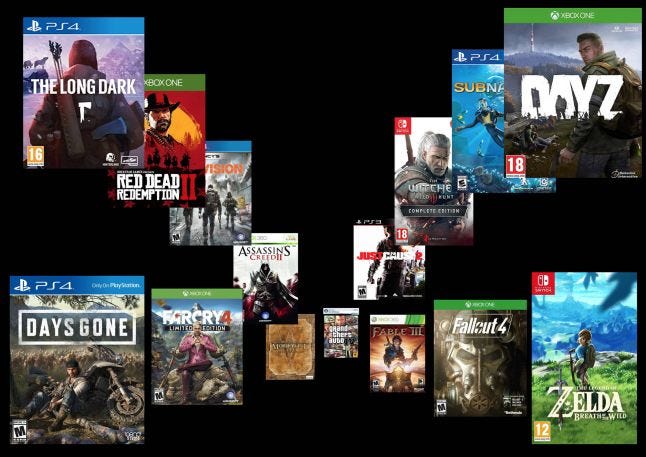 Open world games: They attract players with their promise of freedom and immersion and arouse the interest of publishers because of their business prospects.

These games feature a very specific characteristic: Their level design is more important than their game system. The vast majority of open world games offer very classic game mechanics and it is not they who seduce, it is the open world itself, hence the level design.

In most games, the design team first defines the core gameplay, then tackles the level design; the latter serving as a field of application for the game system. But in an open world game, the opposite is desirable: First, define the main characteristics of the open world, then select the most suitable game mechanisms.

Level design is one of my specialties and I had the chance to work on several open world games: The Black Death, Cabela’s African Adventures, Duck Dynasty, etc. The purpose of this 5-parts publication is to give good foundations to a studio that would engage in such a development but also to a publisher who would have to make editorial choices regarding an upcoming open world game.

The "why" must precede the "how"

When attacking reflections on the design of an open world game, there is a fundamental question that must be asked: Why? Why do we want an open world?

This question deserves a minimum of thoughts because the answer will have a major impact on the content of the open world and therefore, its game mechanics.

Schematically, there are three strategies for using level design in an open world game:

This strategy is at work in several Ubisoft franchises such as Far Cry, Ghost Recon and The Division. Its objective is to offer a huge lifespan to the game. It is achieved by increasing the number of quests, renewing the content of the open world constantly and supporting "farming" mechanisms. As a reminder, "farming" consists, in a game, to encourage players to collect or gain large amounts of resources so that they improve the attributes of their characters, their equipment, etc.

What are the benefits of this strategy?

• The longer players play a given game, the more chance there is of selling them additional content (DLC, cosmetic items, etc.). The latter has become a significant complement to the income generated by the sales of the game itself.

• When a game is played for a long time and its lifespan is fueled by additional, paid or free content, it remains present in the media and the minds of players. Its publisher can thus maintain the visibility of its intellectual property.

• Finally, it is easier to sell a game that offers a long life at a high price, as buyers feel that they are getting their money's worth.

On the other hand, the systemic dimension of the game mechanisms can make the open world repetitive and weaken its gameplay. In addition, it is more difficult to integrate a convincing narrative into it.

I will come back in more detail in a later part on the game mechanisms and good practices in terms of level design for open world games seeking to implement such a strategy.

Red Dead Redemption 2 or the first titles in the Assassin's Creed series are good examples of this strategy. It attracts players by transporting them to a universe that is credible and that interests them. The high level of credibility is obtained thanks to the attention to detail, the historical references and the behaviors of the NPCs (non-player characters) who populate these worlds. Finally, it is the choice of theme that makes these universes interesting: Florence in the Renaissance, America in the late 19th century, etc.

The advantages of this strategy are as follows:

• Its first strong point is the attractiveness of the chosen theme. Players interested in their themes become potential buyers.

• Another advantage is that this strategy facilitates the implementation of quality storytelling. Indeed, if the game world is credible, it is easier to build characters and scenarios that are also credible, two characteristics of good storytelling. The latter attracts some players and has shown that it can bring real added value to many games. As proof, the excellent The Last Of Us, which perfectly combines efficient gameplay and high-quality storytelling.

On the side of the weak points, this concern for details complicates the development, and therefore the cost of development. In addition, the need to make the game environment credible has an impact on the density of actions offered to the player but also on the evolution of skills, powers, and equipment of the character controlled by the players, thus running the risk of weakening the gameplay.

Strategy # 3, the map is the challenge.

This strategy is at the heart of survival games such as The Long Dark, DayZ or The Forest. In most open world games, the map is mainly used to support quests. Apart from the farming of resources and some ambushes, the map has no gameplay function.

But in survival games, this is not the case. It’s the knowledge of the world around them that allows players to survive and even thrive. The players' challenge consists, in part, in knowing how to get around and find the resources essential to their survival. The map is, therefore, a central component in the game system, not a simple decoration intended to link quests or action scenes.

• It offers more original and more complex gameplays than those found in other action games. In addition, this gameplay does not necessarily favor combat and can, therefore, seduce players tired by it or those who favor cooperative gaming experiences.

• The mechanisms of survival games can be complex. They offer a more hardcore positioning of the game. Indeed, the gameplay of this type of game requires mastery of many aspects of the game: Understanding the environment, the use of resources that are found, good survival and development strategies. In addition, any self-respecting survival game does not offer saves. When players’ character dies, they have to start over from the beginning. This brutal feature can be softened but remains at the heart of the gaming experience.

• Finally, this strategy is compatible with many game modes: Solo, co-op, etc.. Co-op modes are particularly interesting because they appeal to a majority of players of all skill levels.

But this strategy also has weaknesses. The mechanisms associated with this genre are complex and can put off the least seasoned players. They also tend to repeat themselves from game to game, weakening their attractiveness.

When the time comes to choose

Few games choose a unique strategy. Thus, DayZ focuses exclusively on strategy # 3 and The Witcher 3 develops strategy # 2 because it is above all an action-adventure game based on strong storytelling; the open world is relatively little exploited.

But many others build their gaming experience by combining these strategies. Red Dead Redemption 2 skillfully mixes strategies 1 and 2. The long Dark develops strategies # 2 and # 3 in an original way: By offering different game modes. The Survival mode offers a real gameplay of… survival while the Wintermute mode is built around a linear story while offering more "affordable" survival gameplay.

Mixing these three strategies to a different degree is a valid choice. When designing an open world game, the mistake one should not make is to add features without asking the question of the game experience one wants to create. Knowing the existence of these three strategies makes it possible to define, in a clear manner for the whole team, the pillars of the game and to make the right choices in terms of features.

In the next part…

Now that we have defined the use of our open world, we need to define how we are going to fill it to achieve this goal. In the second part of this column dedicated to the level design of open world games, I will touch on an essential aspect of these, the player's progression mechanisms.