In the following lines we will speak about the interconnectivity of the world in BOTW, the poor reception of some of its features and specify how two other games were able(or not) to use that idea to create new experiences.
Eddy NJIKI
Blogger
February 04, 2021

In the following lines we will speak about the interconnectivity of the world in "Zelda: Breath of the Wild", the poor reception of some of its features and specify how two games, "Genshin Impact" and "Immortals Fenyx Rising" clearly inspired by the latter, were able (or not) to use that idea to create new experiences.

I- The Legend of Zelda: Breath of the Wild

Zelda breath of the wild, released on March 03, 2017, has been a game changer for open worlds and video games in general.

As Takuhiro Dohta, Technical Director of BOTW said in the making off of the game (https://www.youtube.com/watch?v=30jGWna4-Ns&ab_channel=Nintendo), the interconnectivity of the world, referring to the ability of objects in the world to interact with each other, is BOTW's core technological focus, and is one of the elements that have allowed it to establish itself as one of the games must-haves of recent years.

This interconnectivity ranges from physicality to the impact of natural phenomena (the conduction of metal and water, the hot ascending wind emitted by the burning grass ...), through the AI of the NPCs (which interact between them, with the environment, with objects and with link), climatic conditions and many other elements.

The various upgrades of the Sheikah Slate have also been designed with this vision and add many possible interactions between the different elements of the system (Link, environment, NPCs ...)

This interactivity with the world and all the elements of this giant system which respond to each other, strongly influences the other aspects of the game.

Indeed, this vision is also synonymous with freedom, whether it is in the way to travel the world of Hyrule, the way to approach a fight or to solve a puzzle.

Unfortunately, not all of the elements of the game are viewed as positive.

The game is criticized for elements of its system such as the fact that the weapons break, that Link cannot climb the rocks when it rains, the stamina bar is too small at the start of the adventure…

Without wanting to say that this game is perfect, these elements are, for me, not a problem for three reasons:

A system, stripped of certain elements, even those perceived as frustrating, becomes incomplete, and functions less well. Removing these elements that depend on many other features of the game (and which those features depend on) would have more serious consequences on the overall experience and make it more negative than it currently is.

And since these elements are part of a balanced system that offers many ways to overcome these frustrations, these frustrations become opportunities for the player to make intelligent use of other game features. 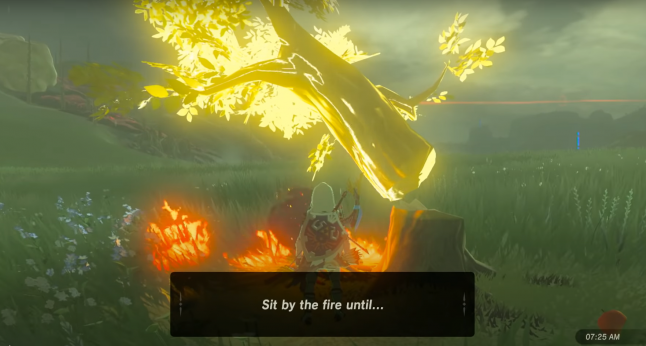 In BOTW, you can create a "hut" out of a falling static tree to make a campfire during rain.

The fact that the weapons break, beyond encouraging the player to have several weapons on him all the time (which is very useful when it rains and in many other situations) allows to give a real feeling of evolution to the player, because just like the stamina, it is a constraint that is demanding at the beginning, that we learn to manage, and which is no longer a problem as we progress. 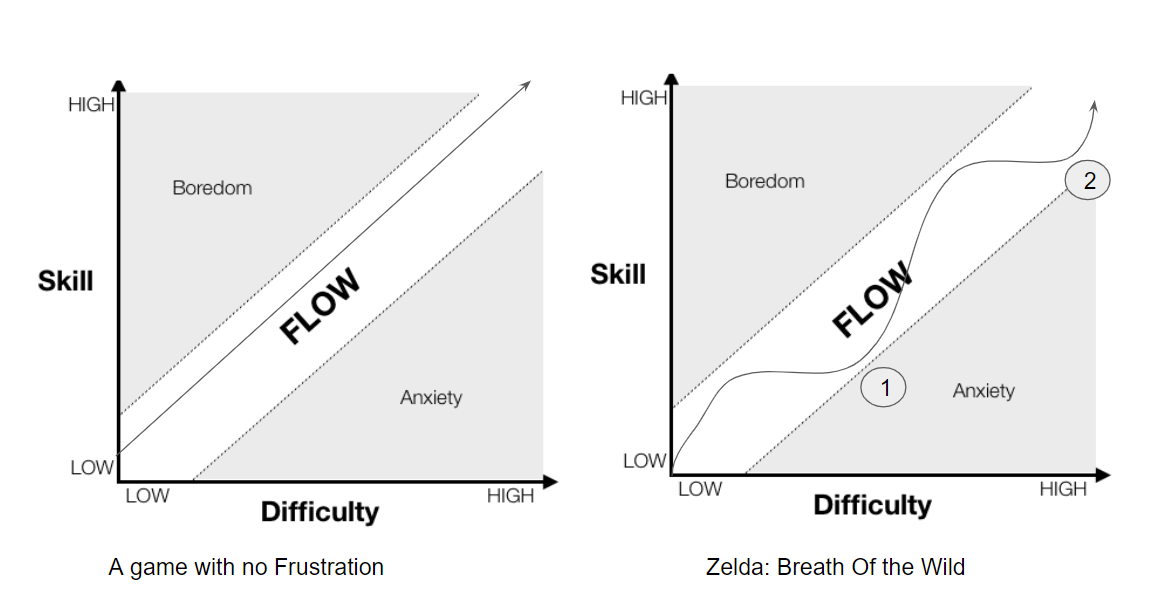 When your weapon breaks in BOTW.

When it starts to rain in BOTW .

Obviously, BOTW's experience as depicted in the second diagram will be more memorable for the player than the game in the first diagram.

A player will rarely talk about climbing a wall but will feel proud to tell you how he used a Remote Bomb to throw himself over the wall despite the rain or how he beat a Stalkoblins with his own hand (the hand of the Stalkoblins ) after his sword broke.

We must therefore be careful not to frustrate the player if we do not give him the necessary elements to overcome this frustration, which Nintendo has fully understood.

So sometimes (not all the time) you have to tell yourself that if people don't like a feature to the point of simply stopping playing, that's okay because those people just aren't part of the audience target of your game.

With such a mastered system, BOTW has set an extremely high standard in the area of interconnectivity.

But what can you say about the games which, released several years later, have decided to draw inspiration from and follow in the footsteps of 19 opuses in this legendary saga?

For his part, Mihoyo, first of all, understood and drew inspiration from this interconnectivity to reproduce the aspect that was useful to them for their game “Genshin Impact”, by removing and adding elements to the system. They then managed to distance themselves from it to build a unique system adapted to their game.

The main difference between BOTW and Genshin is the number of playable characters, and Mihoyo has managed to create an interconnected system that emphasizes this element.

The playable characters each have one element among 7 which will interact with the other elements, the environment, the enemies and the objects according to their particularities.This ranges from fairly intuitive interaction to more complex combinations.

Example: Making a fire attack will set the vegetation on fire, and following up with a wind attack will boost the flames and cause them to spread, but this combo will not work as well if it is raining obviously.

By taking into account the different peculiarities of passives, attacks and ultimates and the fact that the player can switch between the different members of his squad at any time during the fights, we end up with a more complex and interesting system than the simple elementary interactions proposed in BOTW. Combining natural phenomena with the fanciful powers of characters and NPCs, allows good interactivity and surprising chain reactions, especially in cooperation.

And given the limit of 4 characters in a squad, the player must carefully choose the characters of his formation. 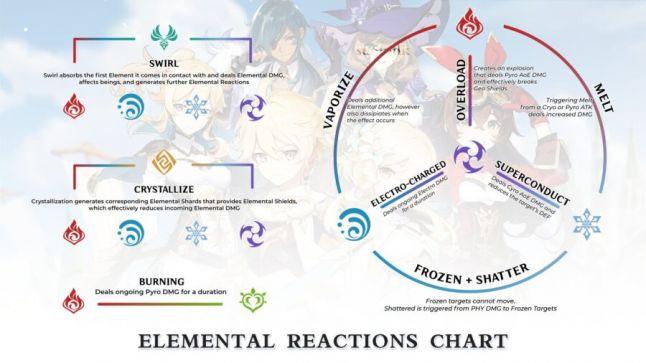 Genshin Impact being a Gacha game, succeeding in harnessing interconnectivity to serve its game and economic system with such mastery was a real feat on Mihoyo's part.

All this, combined with an incredible artistic direction and a great attention to detail.

Genshin Impact is undoubtedly a game, which despite what one might think of its economic system, deserves its success, especially coming from a game made by such a young team. 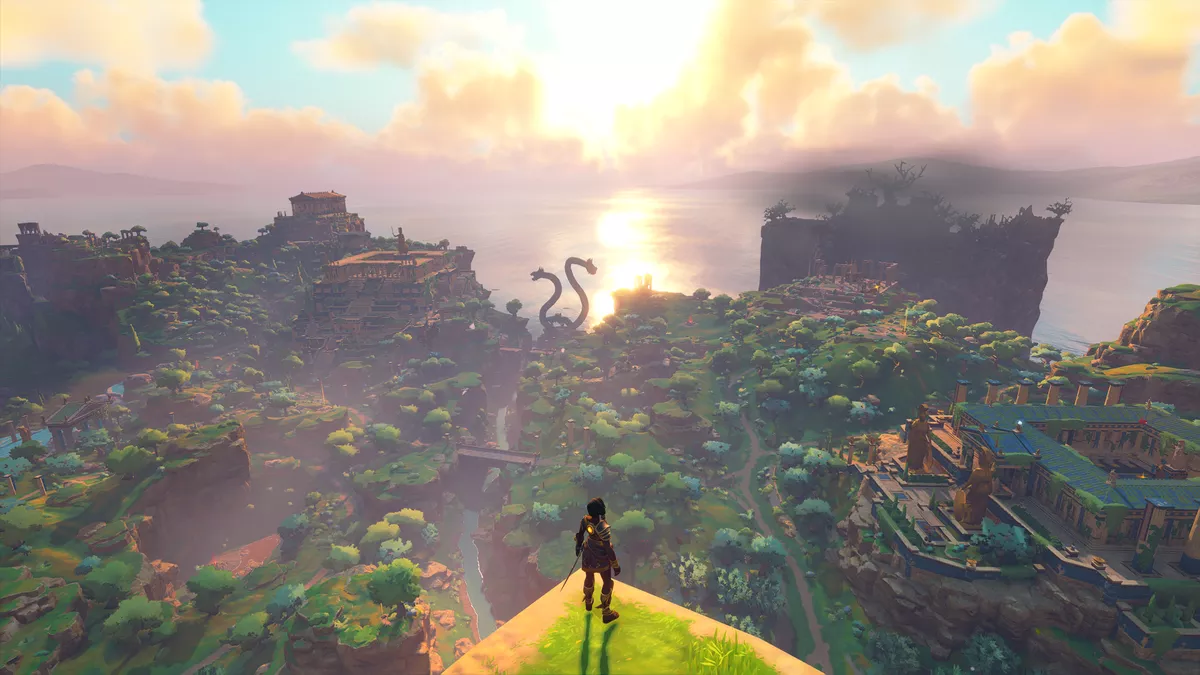 On the side of Immortals Fenyx Rising, the situation is a little more mixed.

Despite a vast world and beautiful landscapes, we do not find the level of interconnectivity of the two previous games.

Interconnectivity in Immortals looks more like isolated, copy-and-paste features of BOTW than part of a functioning system.

My impression is that there is a desire here to take up the elements that work in a system that has not been understood in its entirety, and without even trying to bring something more personal or more innovative. Which gives a more generic and less lively world. For example, unlike in BOTW, only a limited number of enemies can interact with a limited number of elements of the environment. We can also talk about the lack of element interaction (Fire, wind, thunder...) and impactful natural phenomenons. Even the godly powers (except “Herakles's Strength”) add nothing really interesting to the interconnectivity.

There may have been a desire not to push interconnectivity as much as in BOTW, which seems surprising to me given the fact that Immortals immediately provokes the comparison because of its form and structure; comparison assumed by Ubisoft. It is therefore quite natural that players looking for one of BOTW's most striking characteristics should be disappointed, with good reason. Borrowing some elements of form and structure from BOTW but no substance, for me, harms the game, resulting in a comparison that Immortal really didn't need.

Immortal is a game that tries to bring things in, sure, not on the side of interconnectivity, but who will therefore hang out with the specter of BOTW, which is a burden this game could well have done without.

Despite this, Immortals manages to offer interesting elements, such as its combat system, which is an adapted and improved version of what Assassin creed Odyssey offered mixed with some of BOTW’s elements.

For me, drawing inspiration from another work is positive as long as you understand why these elements work in the original game and adapt them intelligently or distance yourself from it enough by building new things from the borrowed elements. I hope the two games of this benchmarking, Genshin Impact and Immortals Fenyx Rising, were designed with that goal.