The Wii is in desperate need of good games. Here's a proposal for a GREAT one.
DanielThomas MacInnes
Blogger
June 10, 2011 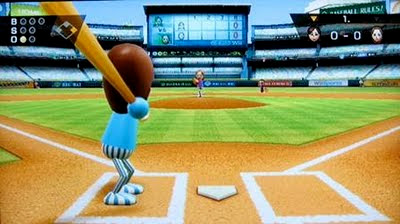 As I'm sure you can gather by scanning this blog, I'm a little frustrated with Nintendo at the moment.  However, I don't wish to be negative or critical without offering some positive solutions.  The lack of quality games for the Wii is a problem that can be easily solved.  There's still nothing wrong with the Wii that couldn't be solved with some excellent multiplayer arcade and motion-control games.  Yeah, I know, it'll never happen.  But we can dream.

This is one of those ideas that seemed so obvious, so inevitable back in 2006, that it feels slightly surreal that it's never happened.  The idea is this: Expand the sporting events in Wii Sports into full games.  See?  It's easy.  This idea wouldn't work with every sport - bowling and tennis are already perfect as they are - but it definitely works with baseball, golf and boxing.

The trick is to keep things simple and iconic.  Wii Sports is, at its heart, a collection of early NES sports games, and you need to stay focused on that simple, arcade approach.  Professional sports licenses aren't necessary, nor are mountains of stats, nor simulation-heavy ideas like injuries and trades and salary caps.  The most important thing is to create a very fun game of baseball.

Thankfully, the fundamentals in Wii Sports Baseball are already perfect.  The batter/pitcher duel is 90% of the sport, and it's very satisfying to play.  Fielding is the only major addition, and thanks to the Wii Remote's d-pad, it should be very easy.  Just hold the d-pad in the direction of the base you wish to throw, and swing your arm.  The speed of the ball depends on your throw, either a lob or a bullet pass.  A bullet throw will get the ball to your baseman more quickly, but it should also increase the odds of a dropped pass.  This could add a little drama when runners attempt to steal an extra base.

The biggest challenge would be control of your fielders.  Personally, I've always been terrible with manual control.  I never have enough time after throwing the pitch to respond to the ball, determine which fielder I'm controlling, or reacting to the change in camera angle.  When I play World Series Baseball '98 on Sega Saturn (my all-time favorite baseball videogame), I always choose "automatic" fielders.

For these reasons, I propose that fielding in Wii Sports Baseball be automatic.  Arcade games aim to capture the essence of the experience; think of the automatic running in Wii Sports Tennis.  This is the key difference between arcade and simulation games. 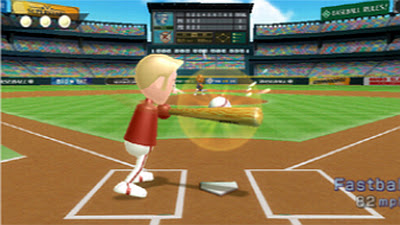 Now let's look at offense.  Swinging the bat is already a lot of fun, but use of the Wii Motion Plus would enable a more accurate and complete experience.  Do you realize the Motion Plus was unveiled three years ago?  At what point is Nintendo actually going to use that thing?!  I swear, they have the attention span of a mayfly.

Anyway.  Bunting should be enabled by holding the Wii Remote sideways and holding down the A or B buttons, similar to going into "guard stance" in WSR swordplay.  Aiming the bat should affect the angle of the ball.  Standard videogame stuff.

Base running is slightly trickier.  The default action would be to stop at the next base; that's what would happen if you did nothing.  To continue running to the next base, shake the Wiimote.  This could either be thought of as a "running" motion, or a coach "waving" the runner along.  Hmm, now that I think about it, shaking the Wiimote up and down should make the batter sprint.  I like a lot of action and movement, so I can see this as a chance to work up a sweat.  To retreat to the previous base, you should just hold down the A or B button.  This is consistent with the bunting motion, and fits with the overall design.

Now here's the tricky part.  Should you be able to advance all runners at once, or should you move them one at a time?  This has always been a design dilemma in videogame baseball.  I can see the merits of both styles.  Wii Sports Baseball aims for a simple, iconic design, however, so I think we should move all the runners together.  Base running has a strategy all its own, but we don't need it to become complicated.

The pitcher should be able to bean the batters with the ball.  No real reason, other than a cheap laugh.  The knockdown animations (yeah, more than one) should be really funny.  If you could hit batters in Home Run on the Atari 2600, you should be able to do it today.

Also, I want to be able to swing my bat down on the plate when I miss a pitch.  I do this every time in Wii Sports almost by habit.  It's another throwaway gesture, but it adds a bit of color and humor to the game. 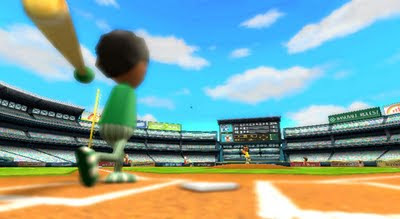 Now that we have the gameplay established, refined and polished, we can work on the gameplay modes.  I think we all know what to expect here - Exhibition, Season, Playoffs, Home Run Derby.  In season, you should be able to select the number of total games, and certainly nothing near a full 160 games.  Too exhausting!  I should probably fire up some NES sports games so I can see how the experts used to do it.  Protip: All video game designers should have an NES handy for quick reference.

For Home Run Derby, I'd like to see some extra features added, like having to hit targets.  How about a variation on Breakout where you have to smash down a giant, multicolored wall?  How about a cameo by the ducks from Duck Hunt?  Wouldn't that be cool?  You could hit the ducks with the ball and win a surprise cameo by the dog!  Now that would be terrific.  Protip: Every good videogame deserves Easter Eggs.

Now onto the league.  Because Wii Sports Baseball aims back to the NES era of sports games, we don't need any licenses.  No logos, no team names, no players, no nothin'.  I'm amazed that nobody remembers sports games before EA.  Heck, the first three Maddens on the Genesis didn't have any official licenses; those also happened to be the best ones.  Coincidence?  Hmm.

How many teams should we have?  Good question.  I think it's best if the number if proportional to the length of the season, but it should be a healthy number.  Should there only be teams in US and Canada, or around the world?  I'm suddenly having visions of that cool globe from Wii Party.  It would be really fun to watch the home team plane fly across the ocean for some baseball.  Yeah, let's do that.

Naturally, the whole point in playing Wii Sports is to see all your Mii characters playing along.  A Create-a-Team option is an absolute must.  You would choose characters for set positions, like, say, The Count at first base, Fat Elvis at right field, Janis Joplin at shortstop.  Charlie Brown at pitcher.

When you select your pitcher, you would then be able to choose that player's arsenal of pitches.  Remember that Wii Sports Baseball lets you throw four different kinds of pitches.  In this full version, you can select from a list.  What kinds of pitches should we use?  The usual suspects - fastball, curveball, slider, screwball, changeup.  There should also be some gag pitches, like, oh...Whiffle Ball?  We also have to include "Fat Pitch" as an homage to Accolade's Hardball, one of the great videogame sports classics.  Video games today should honor its heritage, and there should be more humor; this business takes itself far too seriously.

Finally, there should be teams based on classic videogame systems.  The players will have the console on their uniforms, maybe these should be regional championship teams, like boss characters?  Atari would be in the US, NES would be in Japan, Genesis would be in Europe, Neo-Geo would be in S. America.  You get the point.  Now that sounds like a lot of fun!  I want to play this game right now!

Instead of playing a national anthem at the start of the game, we should get some classic video game chiptune music.  Remember Blades of Steel?  Or Ice Hockey?  Those games had terrific arcade music.  Everything in this game should shout "FUN" in giant crayons.  People should want to play with a smile on their faces.

There should be fireworks displays when you win a night game.  Oh, yeah, we should have day and night games.  Perhaps each city should have its own stadium with unique features, keeping in spirit with the location, but nothing too slavish.  Maybe there should be classic game themes in some stadiums?  Duck Hunt Stadium, here we come!

And that, ladies and gentlemen, is the full and complete Wii Sports Baseball.  Tell me you wouldn't rush to the store to buy copies for you and everyone you know.  Tell me this wouldn't be the most fun you'll have all season.  Now copy this essay and send it to Nintendo's top brass and demand that it be made.